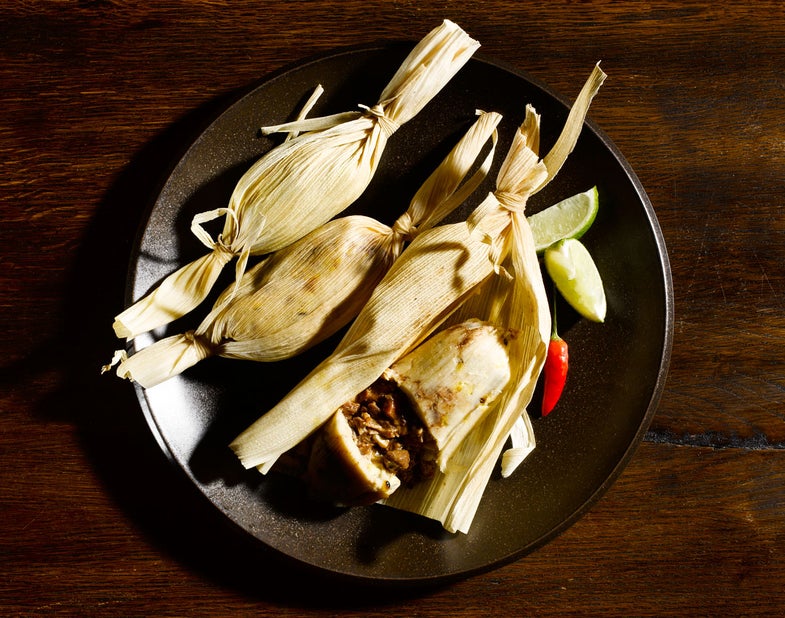 My hunting these days is devoted, almost entirely, to birds. I just don’t have a taste for the solitude of deer hunting. But I love venison. backstrap stands alone very nicely as a center-plate item, and ground venison makes about the best chili I’ve ever had. Venison also makes a great filling for tamales. In the Mississippi Delta, migrant workers helping with the cotton crop during post-Reconstruction brought tamales into the fields. They could be made in advance and were high in protein and carbs, so they were great fuel. The ones here are easy to make and look great on a plate.

Editors’ Take: Between the prep work and the cooking time, you’ll need several hours to make this dish. What won’t take long is cleaning your plate. Trust us. And the extra stuffing is also delicious on its own.

Stuffing:
1. Heat a Dutch oven on -medium heat. Cook the -bacon, remove from pot, and reserve.

2. Season venison a second time with salt, and dust it in the flour (lightly seasoned to your liking with salt, pepper, onion powder, paprika). Make sure the venison is very lightly dusted, not clumped with flour, or the flour may burn while the venison is cooking. Over medium-low heat, brown the meat quickly in small batches in the bacon fat. Remove and reserve.

3. Depending on how much fat remains, you may need to add up to 3 Tbsp. vegetable oil to cook the onion, celery, carrot, jalapeño, and garlic. Stir them in and saute until softened.

4. Add the tomatoes and season with salt and black pepper. Then return the reserved bacon and venison to pot, and stir in red pepper flakes, cinnamon, -cocoa powder, and cumin. Add tequila and lime juice, and bring to a simmer while stirring. Add chicken broth and return to a simmer. Cover Dutch oven and simmer over low heat for about 31⁄2 hours, checking periodically to make sure it doesn’t dry out. Add water if needed.

5. When venison is tender, remove from heat and allow to cool.

6. Pour off any excess liquid (reserve for later) and either: (A) pull apart venison with two forks for a chunkier version and stir in fresh cilantro; or (B) place all ingredients in a food processor and pulse until chopped, then mix in cilantro. Add reserved liquid to achieve a smoother consistency, as needed. Season with salt, pepper, and Tabasco hot sauce to taste.

Dough:
1. In mixer, beat lard and butter with baking powder until light in texture.

3. Beat in hot stock (dough should reach the consistency of thick cake batter).

4. Stir in onion, garlic puree, corn, and cumin. Season to taste with salt and black pepper.

2. Lay one whole husk flat on a cutting board. It should be about 4×7 inches. In the center of the husk, place about 31⁄2 to 4 Tbsp. -tamale dough. Press it out into a rectangle about 3⁄8 inch thick. (This should leave you about 1 inch from the edges.) Spoon about 2 Tbsp. venison filling along the center of the dough.

3. Grab the husk on a long side and gently roll it over the top. The dough closest to you should meet the dough on the other side, sealing in the filling. Use the husk to roll the tamale tightly. Then grab the ends and twist gently, like wrapping a piece of candy. Tear a cornhusk along the grain to make threads to tie the tamale ends. Or simply fold the ends under without twisting; the tamales’ weight will hold them in place.

4. Repeat until all dough is used. Put tamales in a steamer basket and steam for 35 minutes, covered. (There will be leftover filling. Warm it and eat over rice, or place on fresh tor-tillas, cover with sliced green onion and queso fresco, and toast until cheese melts.)

John Currence is the executive chef/owner of several restaurants in Mississippi, including The City Grocery. In 2009, he was awarded a James Beard Award for Best Chef (south).