How To Make A Duck Call Lanyard 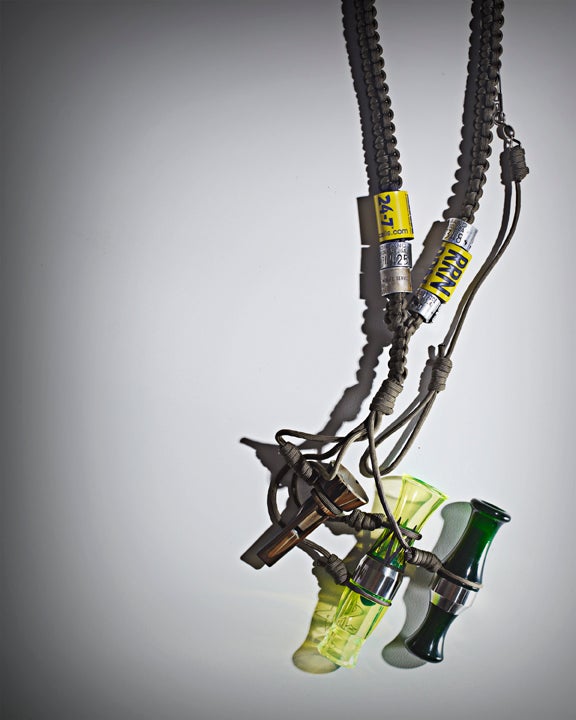 A good waterfowl call lanyard has a purpose above and beyond keeping calls handy and organized. It’s insurance against damage and loss—deep water and swamp mud aren’t friendly to $60 duck calls. You can make a strong and comfortable lanyard in about two hours out of 100 feet of 550 parachute cord for less than $10.

[1] Cut a length of 550 cord twice as long as the intended finished length of your lanyard. Double it over and hang it from a sturdy nail. This will be the core of the lanyard that will loop around your neck. Another piece about 90 feet in length is the knotting cord: Start with the midpoint of this piece behind the core about 4 to 6 inches below the nail (roll up each end and secure it with a rubber band so you won’t have to pull 45 feet of loose cord through your loops). Create a braid by tying a series of square knots around the core: Bring the right knotting cord behind the two core strands to the left side. Take the left knotting cord and wrap it under this end of the right knotting cord, over the core strands, and through the loop created on the right side. Repeat this step but reverse which sides go over and under the core strands to complete a square knot around the core. Continue tying square knots until you reach the desired length—in this case, 40 inches.

Finishing The Lanyard And Droppers

[2] Double the length of braid on itself. Pinch the first and last knots together so the initial loop that hung from the nail lies against the remaining core.

[4] Snip one side of the loop where it emerges from the final knot and use that strand to bind the remaining four cords with a wrapped knot.

Lastly, tie a slipknot on each of the four remaining tag ends; these are the droppers that will hold the calls. You can attach each duck call to one dropper with a slipknot around the groove under the band of the call. Heavy calls can be attached using two droppers.