Snake proof boots, such as ones made by Cabela's and Rocky, offer protection—and peace of mind—when in venomous snake country 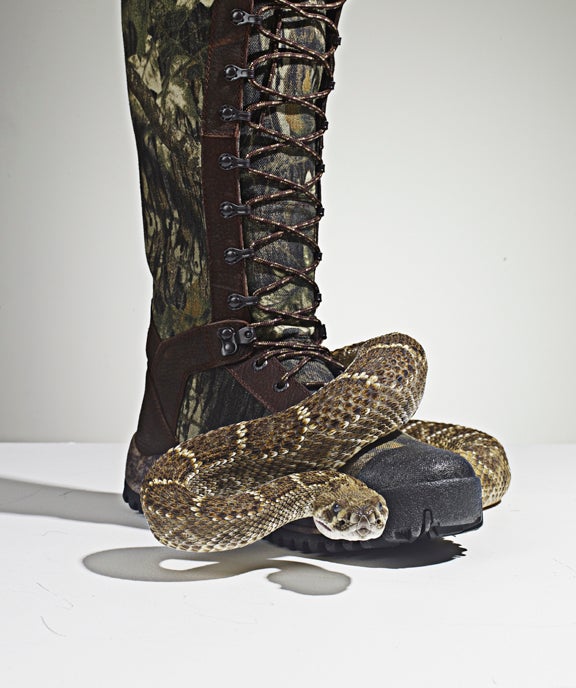 This past October, on a cloudy dawn streaked by light rain, a 12-year-old Georgia deer hunter heard his grandfather, who was standing below the boy’s treestand, say “Ouch.” Less than an hour later, 68-year-old Richard Rupert was dead, having succumbed to a rattlesnake bite on his calf. The story made headlines because snakebite fatalities are rare (the FDA estimates that of 8,000 people bitten by venomous snakes annually, fewer than 16 die) and because the young man acted heroically in his attempt to save his grandfather. With the snake’s rattle buzzing in the near darkness, the boy climbed down, ran to get their four-wheeler, and helped his grandfather climb aboard.

Unfortunately, a 911 call from the first house they reached was too late. Rupert went into cardiac arrest before the ambulance arrived.

This tragedy should serve as a wake-up call. Rupert fit the profile of a snakebite victim that applies equally to you and me—somebody afield in warm weather at low light, or during spring or fall when snake activity is limited to daylight hours.

Out of Sight but in Mind Prevention begins with paying attention to where you place your feet, even in areas where you do not expect to see snakes. Rupert had hunted the north Georgia woodlands for 50 years, never once having seen a venomous snake until the day he was bitten.

Would he be alive today if he’d shone a flashlight at the base of the tree? Perhaps. But vigilance is only one element of snake safety. With the exception of the coral snake, venomous species including copperheads, water moccasins, and rattlesnakes are designed for camouflage. Speaking as an amateur herpetologist, I assure you that it is easy to step within striking range of a snake (two-thirds of its body length) without seeing it. And don’t count on a rattlesnake’s warning. The small timber rattlesnake that bit Rupert did not rattle until it struck.

What could have saved this man’s life was leg protection. This has come a long way since fishermen wore leggings made from stovepipes and clonked to the river with all the grace of the Tin Man. A University of Florida study reveals that 85 percent of “legitimate” bites—meaning unprovoked—occur below the knee. Snake proof boots protect against bites just like these.

Chad Rupert, who is Richard Rupert’s son, points out, “It hurts to think that something so simple as snake boots could have saved my father’s life, but it’s true.” He and his son now wear leg protection religiously. Two options include the waterproof Cordura Snake Boot by Cabela’s ($130; -cabelas.com); and Rocky’s 16-inch ProLight ($120; -rockyboots.com), which I prefer for long hikes in turkey country.

Wearing snake proof boots or other above-the-knee protection is common sense. Don’t reach where you don’t look, and be careful around camp at night, when snakes seek the retained warmth of pavement or cobbles.

Treatment Don’t lance a snakebite wound or attempt to suck out the venom with your mouth. Don’t apply a tourniquet. Don’t apply ice. Constricting blood vessels can lead to amputation. Don’t drink alcohol or take any medications. And don’t try to catch or kill the snake (although a digital photo can help doctors ID the snake and determine proper antivenin use).

What you can do is wash the wound with soap and water. Remove wristwatches, rings, or anything constrictive. Keep the wound below heart level, and immobilize the affected limb during evacuation. According to American Red Cross guidelines, it’s O.K. to wrap a pressure bandage 2 to 4 inches above the bite—loose enough to stick a finger underneath. (The Sawyer Extractor is a powerful suction device that can remove significant amounts of venom at the site of a bite. However, it is not universally recommended by the medical community.) Snakebite impairs motor functions, so if you’re bitten and alone, don’t drive unless you have no choice. Call 911 or contact the nearest hospital ahead of your arrival.

The rest is just pain and suffering. Thanks to antivenin, odds are about 400 to 1 that you’ll live; you just won’t want to for a few days.