Survival: How To Make A Coal Bed 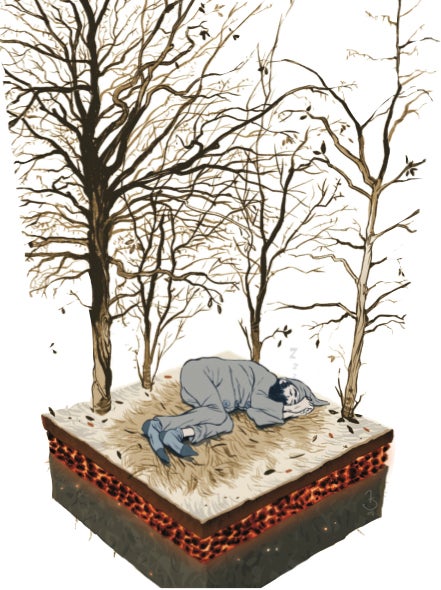 Have you ever seen Jeremiah Johnson?” David Cronenwett asks me between strokes of his saw.

The Robert Redford movie about the legendary mountain man is one of my favorites, but I nod uncomfortably as Cronenwett renders firewood from cottonwood logs for our camp. I have an idea where the question is going.

“You’re going to ask if I remember the coal-bed scene, right?”

Now it’s his turn to nod. The scene we’re thinking about is the one in which Johnson’s mentor, Bear Claw Chris Lapp, teaches him how to sleep on a bed of dirt heaped over wood coals. After not putting enough dirt down, Johnson later comes roaring out of the bed tearing at his clothes, smoke rising from his back.

Cronenwett hands me a stout stick. “Don’t worry,” he says. “This will be fun.”

A former instructor at the Boulder Outdoor Survival School in Utah, where training required wandering alone in the desert for days, Cronenwett has made a career out of teaching hunters and other outdoorsmen survival basics. He customizes classes for individuals as well as groups, and invited me to come along with him on a mid-August day for a crash course in the Montana wilderness. Last month’s column (“Death by Survival”) discussed the importance of hands-on survival training. Today, the classroom is the Middle Fork of the Teton River, and although I have endured many three-dog nights myself, it turns out I could use a refresher course. As we begin to dig a trench for the coal bed, I conjure visions of myself going up in flames later in the night. But one thing I’ve learned after a day under his tutelage is that Cronenwett knows what he is doing.

Or, as Cronenwett would say, he is doing what he knows. “Theory is great,” he’d said earlier. “But in a survival situation, what we do is what we know. You wouldn’t trust your life to a doctor who has studied medicine but never practiced it, would you?”

Life Skills
Cronenwett, a naturalist at the Pine Butte Guest Ranch outside Choteau, Mont. (406-590-8070; pinebutteguestranch.com), defines bushcraft, which emphasizes expertise with knife, axe, and saw, as “high skill, low tech.” Throughout the day, he has instructed me on the finer points of blocking logs with a collapsible bucksaw (“saw like a married man—long, slow strokes”), splitting wedges from the blocks with my knife (“pound on the back of the blade, don’t hit the handle”), and splitting the blocks by pounding the wedges into them. Shaving feather sticks is a critical skill, but my first attempt resembles a stick splintered by lightning, whereas Cronenwett’s is carefully shaved into paper curls so thin that they ignite with sparks from a fire steel.

Once the fire burns down and Cronenwett is satisfied with the bed of coals, we kick the 8-inch layer of dirt we’d excavated back over the bed, then cover it with a springy layer of pine-needle duff. Lying down only inches from Cronenwett, I accept that my performance level at basic bushcraft skills rates a B minus. I know what to do. What I’m lacking is the practice to do expertly, efficiently, what I know.

Vowing to improve my skills before rifle season, I soon succumb to the radiant heat of the bed, and don’t burn up after all.