There are infinite reasons to share in the foremost ritual of fall. 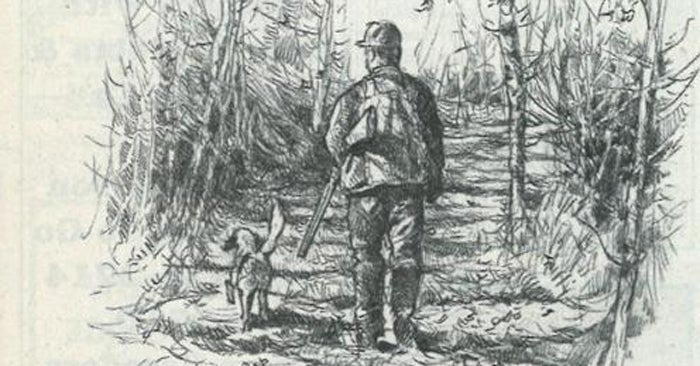 I HUNT BECAUSE MY FATHER HUNTED, AND HE TOOK ME with him, and so we built a bond that I still cherish. And because his father hunted, and his father’s father, and all of the fathers in my line and yours, as far back as those fathers who invented spears and axes and recorded their adventures with pictures on the walls of caves.

I hunt because I’m convinced, as many anthropologists argue, that prehistoric man was a hunter before he was a farmer, and because the genetic drive remains too powerful for me to resist. I do not need to hunt to eat, but I need to hunt to be fully who I am.

I hunt because it links me with the boy I used to be and with the young man my father was then.

I hunt because the ghosts of beloved companions such as Bucky and Duke and Julie and Megan and Freebie and Waldo prance through the woods, wagging their tails and snuffling, making game and pointing. And because Burt, my young Brittany, loves to hunt more than he loves to eat. And because hunting dogs make the wisest friends: They are smarter in many ways than I am, and they teach me things I otherwise wouldn’t understand.

I hunt because the goldenrod and milkweed glisten when the early-morning October sun melts the frost from the fields, and because native brook trout spawn in hidden autumn streams, and because New England uplands glow crimson and orange and gold in the season of bird hunting.

I hunt because if I didn’t, I would have seen fewer eagles and ospreys, minks and beavers, foxes and bears, antelope and moose, and although I do not happen to hunt these creatures, I do love to enter into their world and spy on them.

I hunt for the whistle of a woodcock’s wings and the sudden explosion of a ruffed grouse’s flush, for the tinkle of a dog’s bell and for the sudden silence when he locks on point, for my partner’s cry of “Mark!” when he kicks up a bird. I hunt for the distant drumming of a grouse, for the high predatory cry of a redtail hawk, for the quiet gurgle of a deep-woods trout stream, for the sibilant soughing of the breeze in the pines, for the snoring of my companion in a one-room cabin, and for the soothing patter of an autumn rainstorm on a tin roof.

I hunt because it is never boring or disappointing to be out-of-doors with a purpose, even when no game is spotted, and because taking a walk in the woods without a purpose makes everything that happens feel random and accidental and unearned.

I hunt for the satisfying exhaustion after a long day in the woods, for the new stories that every day of hunting gives us, and for the soft snoring and -dream-whimpering and twitching of sleeping dogs on the backseat as we drive home through the darkness.

I hunt because it reminds me that in nature there is a food chain where everything eats and is, in its turn, eaten, where birth, survival, and reproduction give full meaning to life, where death is ever present, and where the only uncertainty is the time and manner of that death. Hunting reminds me that I am integrated into that cycle, not separate from or above it.

I hunt because it keeps my passions alive and my memories fresh and my senses alert even as my beard grows gray, and because I am afraid that if I stopped hunting, I would instantly become an old man, and because I believe that as long as I hunt I will remain young.

Longtime contributing editor William G. Tapply was a prolific writer, producing more than 40 books (including more than two dozen New England-based mystery novels)and thousands of magazine articles. Bill, son of the legendary H.G. Tapply (creator of Tap’s Tips), had a privileged childhood. By that I don’t mean money, but something far more precious. Friends of his father included Ed Zern, Harold F. Blaisdell, Burton L. Spiller, Lee Wulff, Frank Woolner, and Hugh Grey (Editor of Field & Stream from 1946 to 1966). These were men who in their time were giants read by millions of hunters and fishermen. And Bill got to sit at their side at the kitchen table and in the car while en route to a favorite grouse cover.

He learned well. He took from his father a deceptively simple style that never grew old and from the others a lifelong appreciation of grouse covers, grouse dogs, and grouse guns. He was also a masterful trout fisherman. But one of our most memorable conversations centered on lunch, and I recall him lovingly describing a grouse hunt where he and his father sat beside a crumbling stonewall next to an abandoned apple orchard and ate cheese sandwiches. It was, he told me, as close to heaven as one can get to on earth.