Practical revelations about a buck's first line of defense--from Blitz, the drug-sniffing dog. 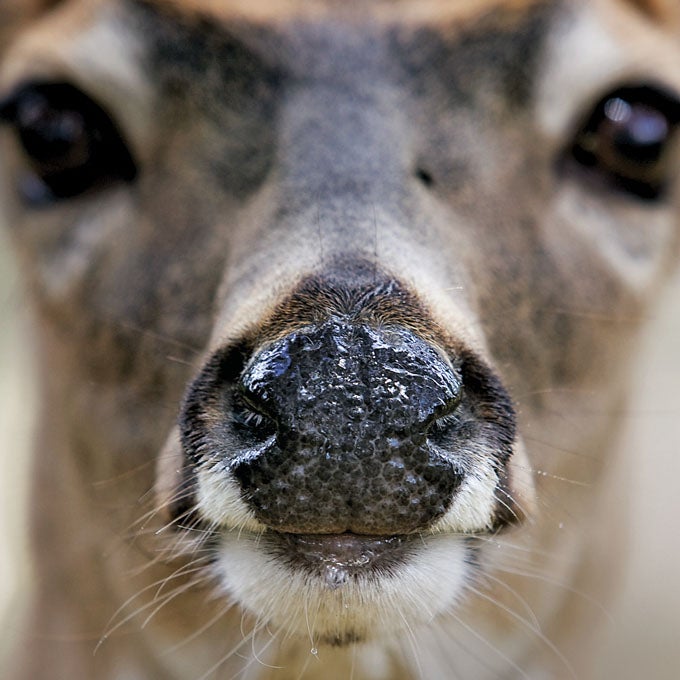 Do rubber boots keep you from leaving a scent trail as you walk to your stand? How far downwind can a deer bust you? How long does it take for your scent to dissipate in the woods?

I don’t have hard-and-fast answers. But I’ve got far better than the usual mere guesses. I’ve got Blitz.

Knowing a deer’s nose is often compared with a dog’s, and hoping to shed some light on a few of the nagging questions about a buck’s ability to sniff us out, I enlisted a pair of professionals: Winona County, Minnesota, sheriff’s deputy Chris Cichosz and Blitz, his 5-year-old German shepherd K-9 partner. In addition to being a drug-sniffing smart bomb, Blitz is trained to find human beings, usually of the criminal variety. But I asked Chris if Blitz could also find a hunter.

So on a fine spring day, I set up the following three tests:

Test #1: The Cold Track
For this test, I laid down two trails two hours before Chris’s scheduled arrival. For the first trail, I pulled on old, smelly -Cordura-and-leather boots, then walked between a CRP field and a food plot, entered a brushy stand of sumac, and dropped a coat. (Blitz needs to find something at trail’s end as a reward.) I scuffed the trail repeatedly, touched brush with my bare hands, and walked back on my own tracks.

Next, wearing rubber boots I’d thoroughly scrubbed with a paste of baking soda and then air-dried outdoors, I walked a 75-yard-long trail along a wooded valley bottom, taking care not to touch anything before dropping an old shirt by a tree. Then I made a large circle to avoid backtracking.

When Chris showed up, I gave him a general idea of where my trails were. Then he led Blitz to the areas on a lead and harness, as I followed a short distance behind.

The Result: Blitz could not detect either scent trail.

The Takeaway: The conditions were dry and breezy, making scenting difficult, and Chris believes Blitz might have picked up the trails on a calmer, wetter morning. Still, it’s a good argument for getting into stand early. It also suggests that dry, windy days are good ones for speed scouting or hanging a stand.

Test #2: The Hot Track
This time Blitz would try to nail a track that was minutes—not hours—old. First, I threw on my untreated boots, zigzagged along a field edge for 100 yards, left a coat at the end of my trail, then looped wide to avoid a backtrail. Second, I repeated the procedure in a new spot, wearing my treated rubber boots. But this time, I walked quickly along a snowmobile trail of very short grass.

The Result: Blitz nailed both trails with ease.

The Takeaway: If you can’t get into stand early, be careful not to walk where you expect deer to approach from. Otherwise, they’ll probably bust you. And don’t expect rubber boots to make any difference.

Test #3: The Body Search
How far downwind can a buck catch your airborne b.o.? To get an idea, I walked in from the wooded, upwind side of a block of timber and hung a stand near the edge of a downwind field. After Chris received my cellphone call confirming I was set up, he waited 15 minutes, then turned Blitz loose into the field from well over 300 yards downwind. When Chris knew Blitz had me, he’d verify the distance with a rangefinder.

The Result: It took Blitz seconds to nail me. Chris was conservative with his confirmation and range verification of 275 yards. I saw the dog jerk to a stop at a distance I probably wouldn’t attempt with a rifle. Once he had my scent, Blitz beelined to me.

The Takeaway: I’ve always been surprised at how many rifle hunters pay little attention to the wind, thinking they can set their stand far enough away so it won’t matter. If that’s you, Blitz has some advice: Watch that wind. You’ll probably kill more deer.