The Holy Trinity of Outdoor Blades: Knife, Ax and Saw

The great bushcraftsman Mors Kochanski once told me that a man can survive in wilderness with only a knife—but carry... 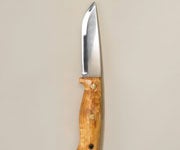 The great bushcraftsman Mors Kochanski once told me that a man can survive in wilderness with only a knife—but carry an ax and he lives like a king. To complete the woodsman’s toolbox, I recommend adding a bow saw. By packing all three blades in your canoe duffel (or on your back, as their total weight shouldn’t exceed 4 pounds), you can carve, chop, and saw your way to a wilderness throne faster and without nearly as much chance of injury than if you leave one tool behind. Here are the three blades I carry and what I can do with them.

As long as you pack an ax and saw for heavy work, a knife is best used for peeling and shaving sticks. Peeled sticks harden quickly, becoming tougher and lighter than bark-on sticks, and can be further shaped into tools like spears, bows, and arrows.

Peel a stick by holding one end and resting the other end against a stump. Keeping your knife arm straight, stroke away from you by moving your shoulder and body, rather than bending the elbow.

To shave wood, use the same technique but slightly flex the wrist of your knife hand outward at the end of the stroke, tilting the blade so it raises a curl of wood from the stick. Repeat until you have a feather stick of fine wood curls for great tinder.

An ax is the most versatile and critical tool in a survival situation; it’s also the most dangerous. Never swing your ax until you see that a mishit ­follow-​through will strike the ground or a log—not bone and flesh.

One of the most important ax skills is limbing a downed tree so the wood can be bucked up into firewood blocks with your saw (pine limbs also make excellent shelter). Chop limbs in the direction in which they grow, usually toward the top of the tree. To avoid glancing or follow-through injuries, stand on the far side of the tree from the limbs you’re chopping. Keep the ax swing away from your legs and use the trunk as a buffer. Make the cuts as flush as possible with the trunk.

The saw is the most fragile of the blades, but it is the safest tool and nothing matches its speed and efficiency for bucking logs into firewood blocks. The longer the stroke, the quicker the work, so choose the biggest saw you can comfortably carry.

To avoid the blade’s binding in the cut, lift one end of the log you are blocking over an object such as a rock or another log, and cut on the raised end so the weight of the log will open the cut, not close it. Let the weight of the saw do most of the work, and use the entire saw blade. One long stroke is worth three short ones and requires less effort. The blade of my saw stores neatly inside the collapsible wood frame, making it a cinch to pack.