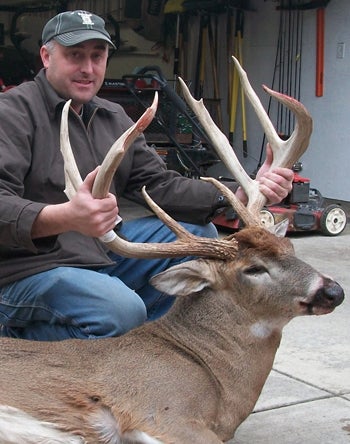 1.) Top-Spot Award
To the county or state that produced the most B&C bucks of 2011
**Winner: Kentucky **
Forget that Derby with the mint juleps and big hats. Kentucky has beaten perennial Top-Spot champ Wisconsin by a length, registering 37 B&C bucks last fall, compared with the Badger State’s 33 entries.

2.) State-Record Award
To the state that set a new mark for its top B&C buck
Winner: Mississippi
The year 2011 was only a few weeks old when James Saunders shot a giant Adams County buck that netted 1846⁄8 inches. Saunders took the beautiful 10-pointer with a muzzleloader–and the Magnolia State’s top spot for B&C typicals with any implement.

3.) Up-and-Comer Award
To the most improved state for producing Booners
**Winner: Kentucky **
After a decade of placing mostly in the bottom half of top-10 Booner-producing states, Kentucky broke through in 2011, besting powerhouses Wisconsin, Illinois, Iowa, and Ohio, and earning double honors–like a ballplayer’s getting an MVP and Most Improved Player in the same season.

Head Hunter Award
To the hunters who registered the top B&C whitetails of 2011
(A) Winner, Typical:
**Craig Robson **
Robson’s 1884⁄8-inch Saskatchewan bruiser, taken on Nov. 25, reminds us that braving Canada’s bitter cold can pay off huge.

Wide-Load Award
To the hunter who registered the widest B&C rack of 2011
Winner:
**Robert Ammons **
Ammons arrowed the widest buck of 2011 in Hardin County, Ky., on Nov. 4. The giant main-frame 10-pointer sports double drop tines, scores 198 inches, and has an inside spread of 293⁄8.

Young Gun Award
To the 16-year-old or younger hunter who registered the biggest B&C buck of 2011
Winner:
Luke Cutinello
Cutinello, 12, had one hour to hunt his dad’s Illinois property before basketball practice when this 1836⁄8-inch typical showed up. That smiling face fits nicely inside the buck’s 23-inch inside spread.

Tall-Boy Award
To the hunter who registered the tallest rack of 2011
Winner:
**Christopher Beagle **
Last fall was a big year for big 8-pointers (see below). Beagle took a tremendous Brown County, Kan., typical 4×4 during the Sunflower State’s modern rifle season. The monster 8 netted 1737⁄8 inches, including a 17-inch G2–the second tallest tine of any Tall-Boy buck honored here and the seventh longest in B&C history.

All-Time Award
World-Record 9-Pointer
Because of a small sticker point, the 1831⁄8-inch main-frame 8-pointer that Jason Sanders took on his Illinois farm last December is technically the world-record 9-pointer. Yet despite that deduction, it outscores every typical 8-pointer registered in the B&C record book (of which there are only 36). Call it what you will–8 or 9–it’s a buck for the ages.