How to Hunt Late-Winter Squirrels

The shadow is a dead give­away. It’s no more than a dark lump, moving along the shadow of a big... 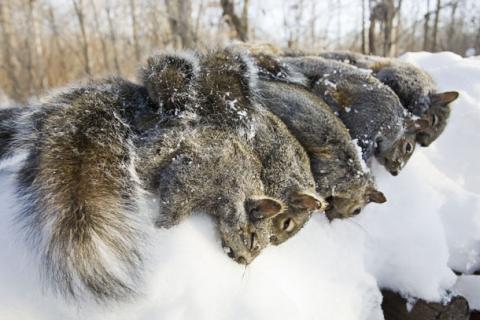 The shadow is a dead give­away. It’s no more than a dark lump, moving along the shadow of a big red oak draped across the ground like a fallen log. I can’t help but grin. This time of year, you rarely see an entire squirrel, and I’ve learned to look for little pieces that point to the whole: a wisp of tail in a tree crotch, a bump on a log. And I couldn’t count the number of squirrels I’ve tumbled when their moving shadows caught my eye. It can happen anytime in the squirrel woods, but it happens most often on a day like this, late in winter, when trees are bare and the forests wide open and long tree shadows stripe the ground.

The shadow melts away—the squirrel must have moved to the far side of the tree–and now a slash of blaze orange catches my eye. My 12-year-old son, Jack, is on the move, too. This is the first year I’ve let him hunt outside my immediate grasp. No longer shoulder to shoulder with me at the base of a big oak, he’s making his first solo forays through the woods. I remember my own well: A 100-acre wood was a magical world, and a .22 rifle in hand freighted every step, every moment, with promise. I suspect Jack is feeling all of that, too, although it may take him 30 years to realize it.

The Small Stuff
I don’t think there’s a better way to wind down a hunting season than to spend a few mornings hunting late-winter squirrels. Some of us never lose our taste for chasing tree rats through the hardwoods, but I’m guessing a bunch of us close that chapter as we move on—and up, we tell ourselves—to deer, ducks, elk, or whatever other game seems to suit our grown-up tastes. That’s a pity. The occasional squirrel hunt is like riding a bike with no hands or smooching with your wife in public. If you think those days are past, all the more reason to pucker up.

And squirrel hunting in late winter gives gifts we might have overlooked as kids. Void of leaves, the woods lay bare and open. You can see the crumbled brick chimneys of old farmsteads, the pitch and roll of the land, every branch and twig, a rabbit’s briery warren, the deer’s bed still warm to the touch. You can see the past, too, if you look in the right places.

As I sit quietly, a highlight reel plays through my mind, flickering scenes of the best of the season now coming to a close. From here I can see the open slash of Black Creek, its banks fanged with cypress knees. I shot a 9-point whitetail there earlier in the year, the last of a heart-stopping trio of bucks that plodded along the creek almost nose to tail, like cows headed to milking. The seep under my feet runs into Meadow Branch, which spills into the creek a couple of stone’s throws to the northwest. Jack and I were skunked there earlier on ducks, then whiffed on a string of Canadas that skirted the treetops. Forgettable shots, yes, but what I won’t forget was how Jack nearly fell off his bucket and into the creek with a huge backward-leaning dawn yawn. I can see the clear-cut where the beagles ran rabbits. The greenbrier thicket where I shot the season’s first meat doe. All this from my winter perch. All things revealed.

But I can barely see Jack now. He moves in and out of sight, a flicker of orange and tan that appears, then disappears, then reappears again, like the windows on a passing train. He’s getting out there. I start to whistle him in, then hold my breath. He knows these woods. It’s time for him to stretch his wings, as well. It’s his last hunt of the season. Soon it will be time to store the rifle and break out the fly rods. A month from now there could be hickory shad in the river, and ancient daffodils pushing up around the crumbled brick chimneys.

The shadow sprouts fine gray fur and a tail, and works its way along a fallen log now, just as I’d hoped. I track the animal through the scope, and when he stops, the crosshairs bump with my quickening pulse. I breathe in, then let half a breath go. Funny, but when a squirrel is headed my way, it never feels like small game..