A Missouri shed hunter discovered a 37-point rack on public land near St. Charles that could be among the top... 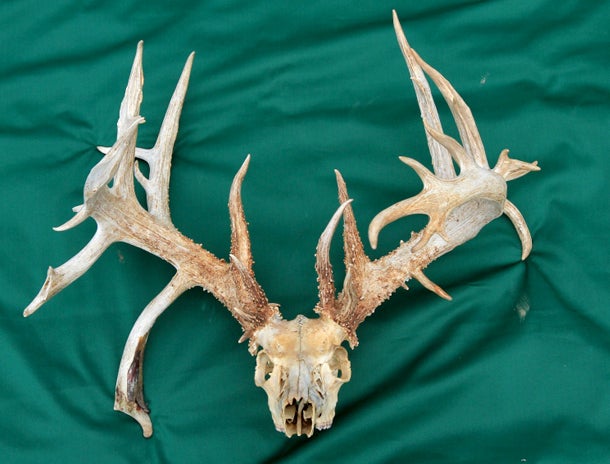 A Missouri shed hunter discovered a 37-point rack on public land near St. Charles that could be among the top five whitetails ever recorded in the Show Me State.

The 270-class antlers–still attached to the skull of a buck that officials believe died in late summer–were found March 13 on the 7,000-acre August A. Busch Memorial Conservation area in St. Charles County. The find immediately brought to mind another trophy pickup from Missouri, the Boone & Crockett world-record nontypical “Missouri Monarch” (pictured below). That 333 7/8-inch 44-pointer was found dead in St. Louis County, which borders St. Charles County, in 1981.

“It’s surprising to see a deer of that size come off the Busch area,” says John Vogel, Wildlife Regional Supervisor for the Missouri Department of Conservation, who has worked at the conservation area for 13 years. “The biggest I’ve seen was in the 190 range. Seeing something in the 270s is impressive. There aren’t a lot of nontypical genetics here. We see a drop tine here and there, but even that’s rare. So it’s unique seeing a rack like this.”

The Busch area, located 30 miles from downtown St. Louis, features hiking and biking trails, an archery range, dog training areas and fishing lakes. It also hosts archery, muzzleloader and youth whitetail hunts. The managed hunts have been popular in the past, and probably will get even more popular now, Vogel says.

Though it’s a pickup like the Missouri Monarch, this latest find went undiscovered for months, far longer than the world-record buck. “What impressed me most is there’s not one gnaw mark anywhere on the rack,” Vogel says. “The rodents and squirrels usually wreak havoc on them.”

Unofficial estimates put the gross at 270, with a projected net in the low 260s. That would be enough to rank the 5 ½- to 6 ½-year-old as the No. 4 nontypical in Missouri. State officials plan to have the rack officially scored in the near future. The shed hunter (who prefers to remain unnamed) was issued a permit to legally possess the skull and antlers.

While the Busch buck is a noteworthy testament to the trophy potential of Missouri deer, there’s no doubt which set of antlers is still king.

“When you see the Monarch, just the mass of that rack, the variety of drop tines and different points going in different directions, it’s impressive,” Vogel says. “If you put the two racks side by side, I don’t think you’d have trouble knowing which is the Monarch. It stands in a class by itself.”