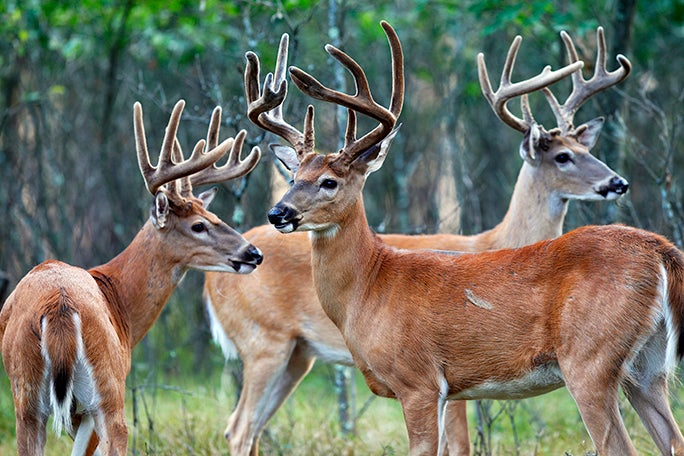 Want to drop a velvet buck? Better act fast. Mark Petrantoni and his son Mark Jr. of South Carolina Trophy Whitetails swear by a four-day, full-plot press for chasing their biggest shaggy-horned deer. “Down here in our zone we have the earliest gun opener in the country, Aug. 15,” says the senior Petrantoni. “Guys travel a long way to cross the velvet buck off their bucket list. We have to hit the deer hard and fast.” Wherever you’re chasing trophy velvets, the same rules apply.

1. Summer Stakeout
The Petrantonis have a network of 33 cameras across their 10,000 acres, but there’s only so much a camera can see. “About three weeks before the season opens, we start sitting in our stands to see what’s moving,” Mark Jr. says. “You’d be surprised how many deer you’ll see deep in the pines, or even in the fields, that walked right around the camera.” The father and son look for patterns. What trails are the bucks taking into the plots and into their bedding areas? With the deer pegged, they move stands to be closest to daytime activity.

2. Desensitize Them
Some land managers back off their plots as the season gets closer, but the Petrantonis stay active, tending fields right up to opening day. The deer get used to people moving about the property and, until guns start firing, don’t associate human scent with danger, according to Petrantoni Sr.

3. Full-Plot Press
“The first three or four days of the season is your time to kill a buck in velvet,” says Mark Jr. “After that they figure out pretty quick that it’s hunting season and start feeding at night.” Based on camera data and their summer stakeouts, the Petrantonis pick their best early-season stands, usually on soybean or cut cornfields, and hunt them midmorning to dark.

4. Sleep In
“Morning hunts are real tough. If you can get in the stand without a flashlight, real quiet, an hour and a half before daylight, you’ll be O.K.,” says Mark Jr., “but bucks go to bed early now, and it’s easy to spook them getting in.”

5. Wind Worries
That first week, the Petrantonis don’t take wind direction too seriously. “A lot of guys come down here and freak out if the wind is wrong,” Mark Jr. explains. “But in the South in August, if you don’t like the wind, wait five minutes and it’ll change.” This is where your summer sits and daytime activity in the plots pay dividends. The deer haven’t necessarily realized you’re after them.

6. Push Back
If day three comes and goes, it’s time to push back off the field. In the South, that means moving into the swamps and pine stands where deer bed. “Now’s the time for a morning hunt,” Mark Jr. says. Catch deer heading to bed after sunup. If day four passes and you still haven’t seen that velvet wall-hanger, you’d better scout harder next year.