Across the country there are museums honoring or promoting the sporting life and conservation–the American Museum of Fly Fishing and... 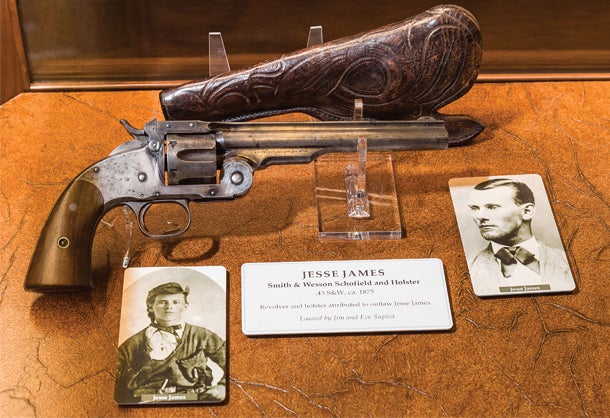 Across the country there are museums honoring or promoting the sporting life and conservation–the American Museum of Fly Fishing and the Rocky Mountain Elk Foundation’s headquarters, respectively, are two good examples. Likewise there are numerous firearms museums scattered about the U.S. But there hasn’t been a noteworthy attempt to pay homage specifically to the tool of some of our most honored outdoors traditions–the sporting firearm–until now.

The concept for the 7,500 square-foot facility was actually an idea that came to Bass Pro Shops founder Johnny Morris after visiting the NRA’s firearm museum in Fairfax, Virginia. But it’s taken nearly a decade for the vision to come to fruition.

“It’s just an incredible facility; unprecedented in terms of design and layout. I think it really sets a new standard in firearms-related museums,” Museum Director Jim Supica says. “This Bass Pro store already receives four million visitors every year–the store in itself is a destination for many people. There’s no doubt in my mind that the addition of this museum will help it maintain its title as the most popular tourist hot spot in Missouri.”

Bass Pro Shops and the NRA say the museum’s main purpose is to celebrate the history of hunting and conservation by tracing the evolution of sporting arms since America’s infancy.

“The museum’s main emphasis is on hunting, conservation and freedom,” Supica says. “When you walk in the entrance, there’s what we call the grand wall–a 150 foot long timeline of sporting arms in America told through exhibits and dioramas (pictured at top). It starts with the early firearms that came over with explorers and the expansion of the continent, moves through Lewis & Clark’s exploration and hunting scenes from the old west, into the early 20th century, replete with a 1950s-style hunting cabin. People really like that scene, especially those that can remember the days when it was about red-and-black flannel instead of blaze orange and canvas instead of rip-stop nylon. The last scene is a modern-day dad and daughter coming back from a duck hunt.”

In Supica’s opinion, the design of the facility and its motif engage visitors before they even see the first exhibit, and helps hold their interest until the exit.

“Literally hundreds of muzzleloaders line the grand stairway leading into the museum, and right away, before you even get inside, you can see the attention to details. An NRA seal inlay is on the front of each step, the trim is color-cased hardened metal and the hand railings have shotgun-styled checkering on them,” Supica says. “There are solid walnut cases and trims throughout the museum, an old fashioned tin ceiling, and outstanding original murals Just an exceptional design and construction. It’s stunning, it really is.”

Many of the guns on display include numerous treasure guns from the NRA museum’s collection in Virginia, but in addition, several companies, foundations and associations loaned historically significant collections specifically for exhibition in the National Sporting Arms Museum.

In the same vain, the museum also offered a chance for the NRA to showcase other pieces kept in storage, just waiting for the right venue–including a display of 120 U.S. Military pistols from 1797 to 1900; a collection of engraved Colt revolvers of the Old West; and a gallery of Hollywood guns used by Clint Eastwood, John Wayne, Steve McQueen, James Arness and others are just a few.

“We get away from the sporting concept in some areas because we had some collections of guns that were just too interesting to pass over. For example, we have Jesse James’ Smith & Wesson Schofield pistol (pictured below)–and what people need to realize is these are the actual guns that these individuals owned and carried. Outlaw guns are extremely hard to document. But we have John Wesley Hardin’s gun and it’s possibly the best documented outlaw gun in existence.

“But to balance the outlaw display, we have an exhibit of Texas Ranger guns. There are about 20 different guns, all from different Rangers, from the late 19th century, up through present day,” Supica says.

In addition to the showcases and elaborate exhibits celebrating historical guns owned by outlaws and past U.S. Presidents, there are a few other highlights lauding what Supica calls ‘milestone guns,’ with equal prominence.

“One of the things that I’m most proud of is the Remington factory collection. It includes nearly 100 original models, early prototypes Remington was working on, and dozens of original oil paintings on loan from the company. These are just some of the great, classic sporting and firearm images that were all painted in the early twentieth century featuring these iconic hunting scenes,” Supica says. “We’ve also been able to get our hands on the 10 millionth Remington ever made, as well as the 10 millionth 870 shotgun ever made, and just the other day, we got the 10 millionth Mossberg 500 donated as well. I promise you it’s the prettiest model 500 ever seen.”

All told, visitors are able to see over 1,000 firearms with a collected value over $20 million, each with its own unique story, and it’s the hope of museum organizers that everyone walking away leaves with a newfound appreciation for the role of sporting arms in U.S. history.

“Visitors that enjoy hunting or guns will want to allow a couple hours for this. You can walk through it in an hour and come away with some great info, but you really need to give yourself a two-hour minimum to soak it all in,” Supica says. “We want to educate people about the rich heritage of hunting, conservation and freedom and the role firearms have played in that history–to cultivate that appreciation and understanding of the importance of these artifacts. They played a big role in the shaping of the country, as did hunting and the drive behind conservation. For centuries, the firearm has been the most effective tool for feeding and defending families, and we want people to come away with a sense of that.”

Admission to the National Sporting Arms Museum, open daily from 10 a.m. to 7 p.m., is free.

Check out this quick video about the conception and construction of the museum, and keep scrolling to see more great guns now on display at the National Sporting Arms Museum.