Gun Emergency: Fix Your Shotgun in The Field

Photo by Bill Buckley Several years ago I fell down a steep bank while on a deer hunt, launching my... 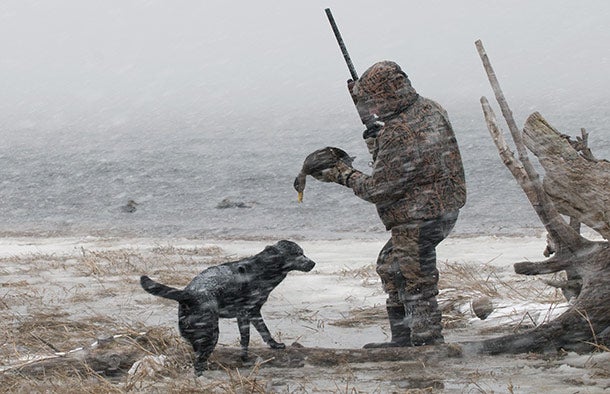 Several years ago I fell down a steep bank while on a deer hunt, launching my pump gun into the air as I flailed to keep my balance. The Browning BPS arced up, then speared down muzzle first into the muddy bottom of the shallow creek, then slowly toppled into the water.

A few inches of mud plugged the barrel and more clogged the action. I took the barrel off and held it underwater until the mud oozed out, then rinsed the receiver in the creek and dried it as best I could with my shirttail. It felt as though it had gravel in the action when I loaded it, but the gun worked well enough to kill a deer 30 minutes later.

When you have a firearm problem afield, there’s no Gun 911 to call on your cellphone. You have to be able to fix what’s wrong on the spot, or go home. Here are three common troubles and their get-you-back-to-hunting-right-now solutions:

A hull that sticks in the chamber of a pump or semiauto locks the gun tight. It’s a depressingly frequent occurrence with today’s budget guns, which may have poorly finished chambers and may not be built to exacting tolerances; and modern ammo with steel bases that stick more frequently than brass. If you’re shooting a pump and your life or next meal depends on a follow-up shot, perform the mortar drill. Hold the gun by the forearm, muzzle up, and rap the butt on the ground. That should dislodge the hull. However, this can potentially bend the gun’s action bars, so if it’s not an emergency situation, unscrew the magazine cap, hold the gun by the grip, and pull the barrel off to dislodge the shell that remains behind in the grip of the extractor. I’ve had to do this to others’ guns many times at high school trap practice and in a duck blind. 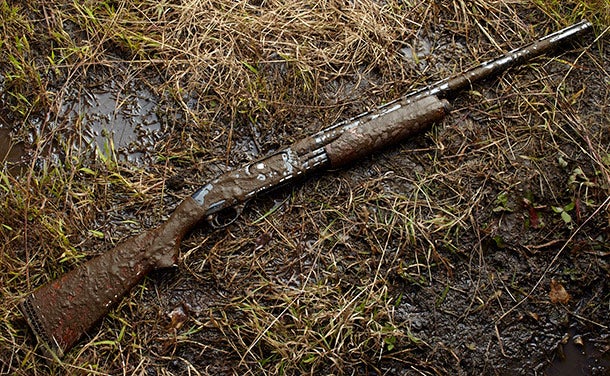 Any time you fall or drop a gun, unload it and check the muzzle for dirt, snow, or mud. Firing a gun with such an obstruction in the barrel risks an explosion that peels the barrel like a banana. I know a couple of people who wrecked barrels shooting them with snow in the muzzle. Through some miracle, both still have 10 fingers. The best barrel-clearing tool is a collapsible cleaning rod, but a straight stick works if you forgot to bring one. Dirt comes out easily, but you may have to rinse mud out of the barrel. You can often simply blow snow down the barrel, then clean it out of the receiver.

A blooper, or soft load, causes a dangerous obstruction when it doesn’t generate enough pressure to push the wad out of the barrel. When your gun goes poof instead of bang and you feel no recoil, check to see if the wad is hung up in the barrel. An AA battery makes a good improvised wad knocker. Hold the gun upright by the barrel and drop the battery down the muzzle. Jig the gun up and down, bouncing the battery on the wad until both of them fall into the receiver.

When you drop a gun overboard or into the marsh muck, take the gun apart to the point where you don’t risk losing small pieces. Rinse any mud out, wipe it clean, and dry it as best you can. On frigid days I have dried guns, warmed the receivers of semi-autos in my hands to thaw their actions, and gone right back to hunting.

The real emergency care begins when you get home. A wet gun left in its case will rust. If the gun went into saltwater, start by hosing it off outside with freshwater. Some saltwater hunters simply shower with their shotguns. Then take the gun completely apart. You can leave the trigger group assembled; it’s difficult to put back together, and the parts can all be cleaned in place anyway.

Pull the stock off to drain water that might have leaked in. Remove the magazine spring and the action spring of a semiautomatic. Hold your hand or a rag over the ends of the magazine and action tubes so you don’t lose parts when the springs uncoil. Clean out the tubes.

Inspect outside steel surfaces for the rust spots that can form quickly on some matte finishes. A dab of Flitz polish on a finger, cloth, or nylon brush gets rid of rust. An old toothbrush and Flitz works well for scrubbing rust spots underneath vent ribs.

Fill a plastic tub or sink with hot water and dish soap and scrub the dirty internal parts, including the trigger group. Then use a blow-dryer to remove every drop of moisture. You may have to let very wet wooden stocks dry overnight. Lightly lubricate all parts when you’re sure the moisture is gone. Put the gun back together with the satisfaction that your EMT skills have saved the gun’s life.