Photo by Donald M. Jones If you want to shoot a limit of rabbits, you need to find small openings... 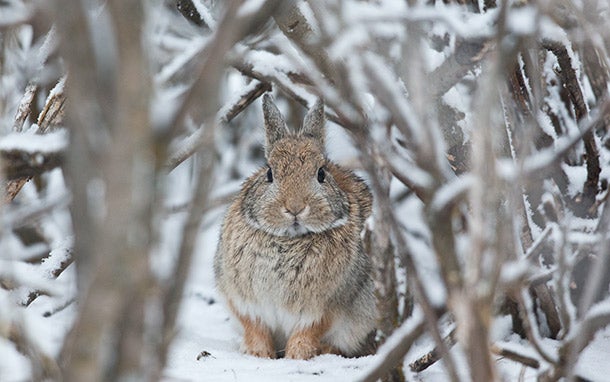 If you want to shoot a limit of rabbits, you need to find small openings in big, thick cover. Here’s where to take a stand.

Forget those old Remington calendars where rabbits made tracks across open cornfields as beagles bawled in the distance. These days, cottontails hole up in the thickest cover around, like brush-choked woods and brier-laced cutovers. The secret to rolling rabbits in this country is to identify escape hatches. And to get there before the bunny–not to mention a fellow hunter–does.

Fringe benefit
It’s not uncommon for a rabbit to stop just short of a field edge, giving a stand hunter an easy shot. To keep from ruining meat, take a fringe shot. Put the bead a few inches to the side so the edges of the pattern do the work.

Escape hatches
Post up where cover thins out just enough for a shot.

A running rabbit will avoid open woods, so target inner edges where young, thick growth, such as pine plantations, forms an obvious boundary. Rabbits will often squirt out of the brambles for a fast dash to open up distance when dogs get too close. And old homestead sites are a honey hole, providing escape cover in the form of overgrown pastures, tumbled-down structures, and old postholes that cottontails have converted to burrows.

A young clear-cut is a cottontail’s happy place. To get off a shot, key in on rare patches of open ground. Look for places where rabbit runways–heavily used shin-high tunnels through thick cover–cross old logging roads and skid paths. If possible, gain some altitude. Post up on top of a rock pile, stump, or root ball for a better bird’s-eye view. Slash piles and overgrown logging decks are choked with the tangled brush bunnies love. Be there first.

Corn stubble and wheatfields, while not all that thick or gnarly, are often too tempting for rabbits to resist, so tip the odds in your favor. Keep watch at the corner of fields and bramble-choked ditch banks for rabbits that cut off the angle. Fencerows along field edges are cottontail highways, so find a spot with a long view. Don’t silhouette yourself; lean against a tree and stay quiet. Rabbits will turn away if they hear standing hunters talking back and forth.