_Photo by Luke Nilsson _If you’re in the market for a new turkey call this spring, we’ve got you covered.... 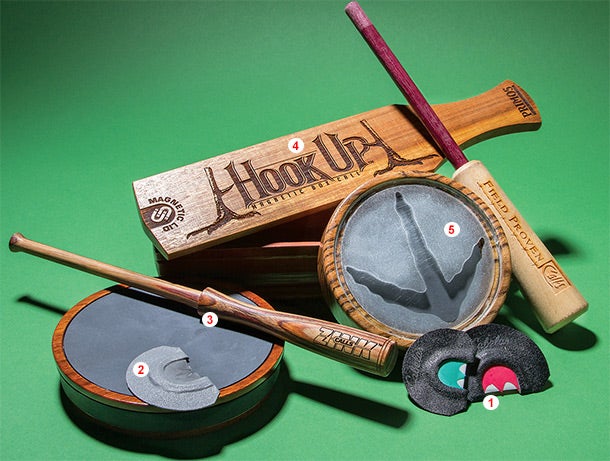 _If you’re in the market for a new turkey call this spring, we’ve got you covered. These 5 new calls will bring gobblers running.

1. Cabela’s SLT Batwing Triple
$10; cabelas.com
If you like a raspy diaphragm call as much as I do, you’re going to love Cabela’s new batwing model. This triple-reed is part of the company’s new Second Language: Turkey family of mouth calls, which come in both full- and small-frame styles to fit just about anyone’s palate. Newcomers might find using it a tad difficult at first, but once you get the hang of it, it’s all turkey.

2. Flextone Si Cut Diaphragm
$8; flextonegamecalls.com
Flextone jumps on the wildly popular Duck Dynasty wagon with an entire line of Uncle Si Robertson calls, including this one, the Si Cut Diaphragm. The three thin reeds with a somewhat novel V cut make good nasty yelps. And you can bend the aluminum frame to fit your mouth perfectly. It’s not for the faint of lung, but it sounds great.

4. Primos Hook Up
$45; primos.com
The name is goofy, but the call is innovative, replacing the traditional tuning screw that attaches lid to box with a strong magnet. This gives more flexibility, which allows unusual friction angles and an increased turkey vocabulary. The lid is a handful but not cumbersome. Most important, the sound is phenomenal, and it makes great gobbles, too, thanks to a unique accompanying Gobble Band.

5. Field Proven Mini Tracker
$55; fieldprovencalls.com
Small pot calls usually lack oomph, but the Mini Tracker is an exception. The glass-over-slate surface is set in a dense South American bocote pan that provides an incredibly clear, high-pitched tone and lots of volume. This handsome pot also comes preconditioned. The purpleheart striker is a bit bulky, but company owner Field Hudnall assures me there’s a thinner version on the horizon.