Image from allaboutbirds.org Some of your best spring turkey hunting spots are completely void of birds right now, have been... 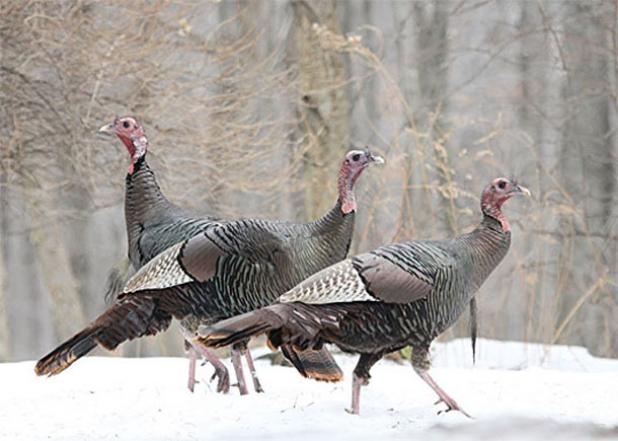 Some of your best spring turkey hunting spots are completely void of birds right now, have been for weeks, and will continue to be for weeks to come. But take heart, turkey hunters. Wintertime turkey scouting—the kind you could be doing right now—is not just a way to kill time. It’s a way to help kill your next bird. Here are some steps to take.

Turkey hunters can do the same thing right now. Numerous small flocks — and in some cases, entire local populations of turkeys — gather into huge flocks in the winter time, gobblers included. The flocks amass in areas with good winter food sources and roosting habitat, but those areas might be a couple miles from their eventual spring ranges. Crop fields with abundant waste grain on the ground and hardwood ridges replete with mast will hold winter flocks of turkeys. Stands of timber adjacent to cattle farms are prime, too, as turkeys can get about everything they need for a cold winter’s day from cow pies and hay. Winter flocks aren’t especially difficult to find if you know where to look, and they’re often visible from a road. A few days of glassing can give you a good handle on the longbeard numbers in your general area. Glassing will also help you identify the boss gobblers with the biggest beards and longest spurs.

Last season, I got on the same public land gobbler two days in a row. He was deep in unfamiliar timber, and he drifted away in the same direction both mornings. I ran out of days to hunt him, and mostly forgot about him until the other day, when I was nosing around on Google Earth. I zoomed in on the ridge where he was roosting and immediately noticed a secluded hay field 300 yards away. Had I known that field was there last year, I would’ve come in from a different route and killed that turkey, because I know damn well that’s where he was going after fly-down.

Google Earth is an indispensable modern-day scouting tool, and it’s at its best right now, when you’re stuck inside with nothing else to do. You can obtain an amazing amount of landscape-level intel in just a few minutes. You can use it to learn much of the same stuff a topo map tells you – where are the hills, saddles, drains, and hollers – but also which fields are mowed and maintained (gobblers don’t strut in thickets), and where the hardwood timber and pine forests are located.

Go for a Walk
As productive as glassing and online scouting can be, they’re still no substitute for boots on the ground. The field I found on Google Earth may have been an ideal strut zone last year, when the satellite image was taken, but it could be an un-mowed, overgrown mess this year. I can’t know that unless I walk in to see it.

When we finally get those first 60-degree days of the year (truthfully, I’ll be ecstatic with a nice 40-degree day here in Kentucky), you’ll be ready to get outside. Now is the time to do some walking and gain a real-world understanding of how your hunting area is setup. There’s no foliage to obscure your view, and since turkeys haven’t dispersed into their springtime ranges yet, you don’t have to worry as much about disturbing them.

If you’re hunting the same farm you always have and know it blind-folded, then you can just use this step as an excuse to look for shed antlers. But for learning the details of a new spot – public or private – this is the final step to take before listening for gobbling in the weeks ahead.

If that thought doesn’t get you excited, you’d best just stick to ice-fishing.