Train Your Bird Dog How to Find Sheds

Photo by Lee Thomas Kjos/The Raw Spirit One of the biggest challenges in shed-antler hunting is simply covering enough ground... 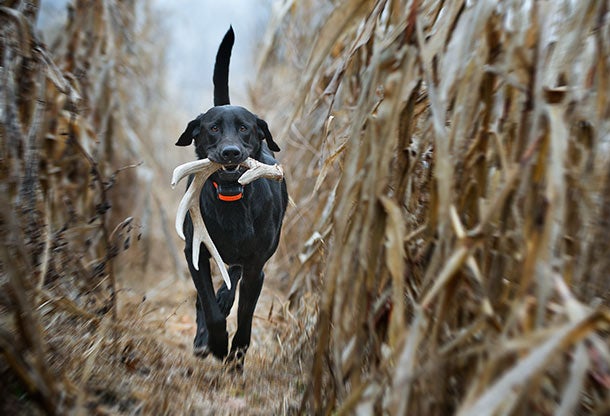 One of the biggest challenges in shed-antler hunting is simply covering enough ground to find the bone. But according to renowned Minnesota gun-dog guru Tom Dokken, I own the solution–and he’s sprawled out on my living-room floor chewing a slipper. Dokken has spent the last several years perfecting a training regimen that can turn just about any dog into a shed hound. My golden retriever, Lucky, may have spent his last idle winter.

“I’m a longtime bowhunter, and I’ve always hunted sheds,” says Dokken. “And I’ve been training hunting dogs for many years. It just seemed natural to develop a training program that put the two together. I finalized the course four years ago, and it’s taken on a life of its own.”

Dokken now conducts seminars across the country on training shed dogs. He’ll train your pup for a fee. He developed Rack Wax, a training product that mimics the natural scent from the base of a cast antler. And every April, he hosts the North American Shed­Hunting Dog Association national championship at his Northfield, Minn., facility. “It started as just a fun competition,” Dokken says. “Now it’s a two-day event, and we have three different trial classes. Last year we had 25 dogs from all over the country.”

But if, like me, you simply want to find more sheds, Dokken has plenty of advice and encouragement. “Retrievers have a slight edge in terms of trainability,” he says. “But any breed with a retrieving instinct can be trained. I’ve seen upland [pointing] breeds, spaniels, even shepherds do well. Like most dog training, teaching how to find sheds is conditioned behavior. You get the dog excited, make the game fun and successful for him, and work in a sequence.”

How To Make a Shed Dog
Dokken breaks down training into four steps:

1. Start simple. “This is just like training a dog to retrieve, but the dummy is an antler,” Dokken says. He uses a small, light shed at first and trims off any sharp tines. With a pup, start in the hallway, he advises. Just toss the antler a short distance, have the dog run over and pick it up, and then call him back in. “The hallway restricts where the dog can go, and you make a big fuss over him when he brings it back.”

2. Take it outside. When the dog has mastered the hallway, move to the yard, where you can increase the retrieving distance and introduce the command Find the bone. “This command helps a hunting dog recognize that he’s doing something different than looking for a grouse or a pheasant,” says Dokken. If the dog wants to wander off with the antler, put a long check cord on him so you can gently reel him in. “Give him a little treat–I like little chunks of hot dog–when he brings the antler to you.”

3. Make him hunt. Once the dog is retrieving antlers well, it’s time to teach him how to find them on his own. First, treat several antlers with Rack Wax so they have some scent for the dog to find. Next, set them out fairly close to one another in taller grass or under small bushes in a field, marking the area with surveyor’s tape so you can guide the dog toward the antlers from a distance. Say “Find the bone,” and turn the dog loose. “Make the initial hunts easy so the dog has success and stays excited,” says Dokken. Keep at this for several weeks, gradually increasing the difficulty.

4. Raise the bar. The better your pup gets, the harder you should push him. “You leave human scent every time you place an antler, so you want to eliminate that clue for him,” Dokken says. “Wash the antler in no-scent soap, only handle it with rubber gloves, and throw it instead of placing it.” If your dog gets really good, you can try some even tougher drills, which Dokken shares on his website, shed​dog​trainer.com. “Then it’s just a matter of getting him out there where the antlers are and letting him do it for real.” In the end, you’ll definitely pick up more sheds for your collection…and shorten the long wait until next hunting season.