Bowfishing is about the most accessible form of bowhunting out there. There is no sitting around like you would when... 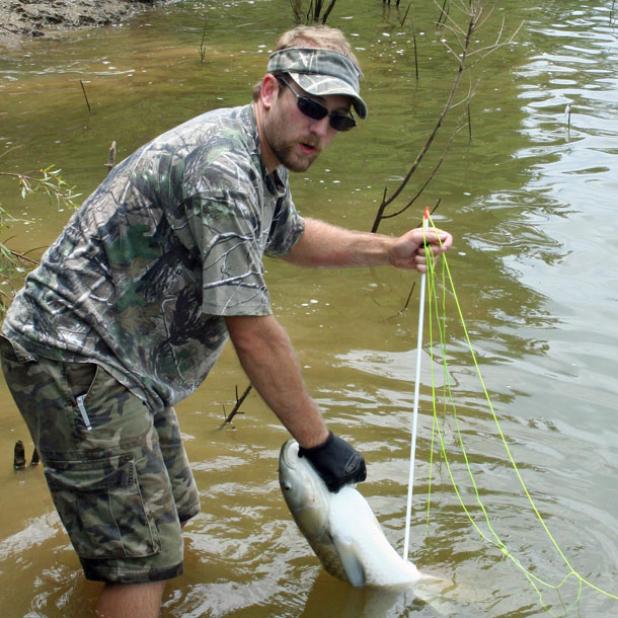 Bowfishing is about the most accessible form of bowhunting out there. There is no sitting around like you would when waiting on a deer to walk by or for a fish to bite. There is no whispering and being cold. Instead, there’s lots of shooting, and on a good day, reeling in lots of big fish. And a bowfishing spot is rarely far away.

You don’t need a whole lot of expensive gear, either. Barefoot women in bikinis – we’re talking cheap bikinis from Wal-Mart – go bowfishing all the time. Hell, even watching it is fun.

Truthfully, the only required gear is a fish arrow tied to a line that’s tied to a bow. For many years, I shot gar and carp from drainage ditches using an empty coffee can bolted to my bow’s riser as a hand-wind reel. That’s the stuff of wholesome memory. But good gear does make bowfishing more fun and productive. Here’s an inside look at a few items that – while maybe not essential – are definitely worth having.

1. Cajun Sucker Punch Bow and Hybrid Reel Combo
The AMS Retriever has been the yardstick of bowfishing reels for a numbers of years. It’s still a damn good reel. But now it has some competition in Cajun’s new Hybrid Reel, which blends the tangle-free, zero-drag characteristics of the AMS with the high retrieval speed of a spincast reel. I reviewed this reel, along with Cajun’s new Sucker Punch bowfishing bow, in the April issue of Field & Stream. This is a bow that comes with either constant-draw or 60 percent let-off modules (a feature I like when I’m after big fish in deep water). Although time will tell how well it holds up to abuse, it seems to be the real deal. It’s the setup I’ll be shooting this summer. ($449.99; cajunbowfishing.com)

I’ve shot fish with a variety of bowfishing points. Big barbs, small barbs, folding barbs, and multiple barbs. But if I could choose only one point, it would be the Muzzy Gar Point, hands-down. It has unmatched penetration potential on tougher species, such as grass carp and heavy gar, and it’s so durable that I’ve fired it into heavy riprap without damaging it. Although the point’s small barbs and Trocar tip aren’t the best for holding soft-fleshed fish like bighead carp and paddlefish (pictured above), complete pass-throughs on those fish with this point are a frequent occurrence. When that happens, barb size doesn’t much matter. Reversing the barbs to remove the arrow from a fish takes about 5 seconds. ($7.95; muzzy.com)

3. Sweet Lucy
I don’t remember where I heard the name “Sweet Lucy” as it pertains to a hefty hardwood stob suitable for whacking a 50-pound carp into submission, but I do know that when a giant fish is flopping in the floor of my boat and wrecking gear, Sweet Lucy puts a stop to it. This near-indispensable item is so cheap you can afford several different models. (Perfectly free in back yards everywhere.)

4. Polarized Sunglasses
Although many prefer bowfishing at night, shooting on a calm, sunny day can be just as productive. There are fewer bugs, and you can save the after-dark hours for drinking beer and celebrating your fish-sticking triumphs. But for daylight shooting, good polarized sunglasses are a must. The difference in quality is literally the difference in seeing fish – or not. After many years and pairs of junk glasses, I got a pair of Costa Del Mar Double Haul glasses last summer. They’re the best I’ve ever tried. ($179 and up; costadelmar.com)

Look, this sport is messy business. It’s not uncommon for big, thrashing carp to create projectiles of their entrails. And their slime, given a little time in the sun, will bake onto your boat’s hull solid as a clear-coat paint job. So a boat-bound bowfisherman needs a gut bucket. The heavy-duty plastic, lawn and leaf buckets from Wal-Mart cost about $10 and will do everything a good gut bucket should.

6. Fishing Biscuit
Bowfishing rigs don’t require precision tuning, but to hit a fish under water, you do need an arrow that flies straight. Shooting right off the shelf, recurve-style, works. But a containment rest is so much handier when a sudden shot arises. Plenty of enterprising bowfishermen superglue the bristles of a Whisker Biscuit rest together so that they’re rigid enough to support a 1,000-grain arrow. But Trophy Ridge also sells a bowfishing version of the Whisker Biscuit called – you guessed it – the Fishing Biscuit, which will support a bowfishing arrow. It’s also adjustable for windage and elevation, which is a handy thing when you’re trying to set a perfect nocking point. ($49.99; trophyridge.com)

7. Q-Beam and Lawnmower Battery
Bugs aside, shooting at night does have advantages. Many species are more active near the surface after dark, particularly on lakes and rivers that receive heavy boat traffic. Yet, the standard bowfishing light setup – multiple halogen bulbs powered by a portable generator – is expensive, not to mention noisy enough to spook bigheads, grass carp, and other wary species. A 6-volt lawnmower battery will fit into a sturdy backpack, so it’s handy enough to use from the shore or while wading the shallows. It’ll provide silent power to a Q-Beam for a couple hours.

The design on the shirt doesn’t really matter. It can be camo or your favorite beer logo (so long as it’s not an IPA or some such hipster brew). I’ve seen some fine shirts decorated with howling wolves and dream catchers. But the only things required of a good bowfishing shirt are that it is rendered sleeveless and thick enough to absorb a full day’s worth of carp guts and slime while retaining a clean spot. You’ll need somewhere to wipe your hands on before grabbing a sandwich from the cooler, after all.