Photo by Satoshi When a gobbler’s glowing head pops up, a red-dot sight helps you put him down. All last... 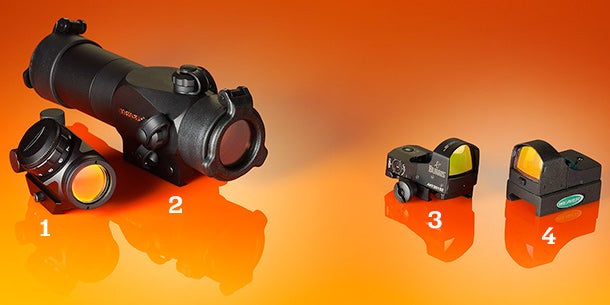 When a gobbler’s glowing head pops up, a red-dot sight helps you put him down. All last season, our testers evaluated four models to see which performed best.

1X red-dot sight is ideal for turkey hunting. Unlike a laser sight (which projects a dot onto the target), the dot in this case rests on the sight’s front lens, providing an accurate, easy-to-see aim point that gets you on target fast. Red dots are also parallax free with unlimited eye relief; no matter how awkwardly you have to twist to get a shot, as long as you can see the dot and put it on a gobbler’s head, you’ll be punching a tag. We gave four experienced turkey hunters the four sights at right to use through an entire season to see which offered the best overall ease of use, durability, and performance in the field.

The Lowdown
On the strength of its value and its compact, easy-to-use design, the TRS-25 swept into first place. “It is a great compromise of cost and performance,” Ray said, “the easiest of the four to turn on and off and adjust the brightness level.”
Phillips liked the brightness dial, saying, “It rotates over 11 clicks, letting me dial in a fairly dim dot for low-light conditions and a very bright one that can be seen on the brightest of days.” He said the elevation and windage dials were user-friendly, and the battery simple to install.
To Mobley, the strength of the TRS-25 was that it had “no unnecessary features; it’s just a practical, well-made sight that performs above and beyond its price.” He deemed it “very durable…I can see this standing up to years of abuse in the woods.”
Vickery appreciated the fact that the battery was widely available. “This is my favorite of the bunch,” he said, “so much so that I bought one.”
Hits: “Simple design.” –Phillips
Misses: “Sight window is a little small.” –Ray

The Lowdown
The testers were impressed with this sight. Vickery called it “a really nice, well-thought-out piece of gear” and found its three color options–red, green, blue–to be innovative, noting that in certain conditions, “the blue really stands out better than the red.”
Several testers praised the reticle, which has an illuminated ring surrounding the dot. “For us aging hunters with declining eyesight, the circle around the dot” can help in acquiring the target faster, said Phillips. He also liked how the remote pressure switch could be mounted near the trigger and operated with a touch of a finger, reducing movement that could spook a wary gobbler.
Mobley said the product performed well: “It was easy to operate and had a wide field of view.” But he had trouble opening the battery cover and scored accordingly. Ray said the flip-up lens covers and detachable sunshade were real pluses.
Hits: “Very rugged.” –Vickery
Misses: “A bit cumbersome.” –Phillips

The Lowdown
Its compact, rugged design earned high marks for the FastFire, but that compactness led to some issues, especially for Ray, who praised the large field of view and ease of installation but said the small on-off button and reticle adjustment controls were a major drawback. “If you have large hands or are wearing gloves, it is hard to turn on or adjust brightness levels.”

Although Phillips felt the sight was well built, he was unhappy with the windage and elevation adjustments: “The small screws would be virtually impossible to adjust in the field without a miniature screwdriver.” However, he noted, “field of view was great.”
Vickery said, “I found the unit to be a pickle to install and adjust. The brightness button is hard to push.” And it also “fogged up. Not good in a humid environment.”
Mobley called the brightness-control button “a little small for my liking,” but he felt that the sight was easy to mount and “the housing is sturdy and very compact.”
Hits: “Will hold up under harsh conditions.” –Mobley
Misses: “Bright setting is way too bright.” –Vickery

The Lowdown
Even though it was the least expensive sight, testers thought the Micro Dot had some solid features. “This is your basic red-dot sight–nothing fancy,” said Phillips. “It just provides you a dot to place on the target. Do you really need anything else?”
That said, testers thought there was room for improvement. “The windage and elevation adjustments require a small screwdriver and a lot of patience,” said Vickery. “The battery replacement is not well thought out.”
The sight housing was “sturdy,” according to Mobley, but changing the battery was a trying exercise. He agreed that the windage and elevation set screws were “tiny,” as were the locking screws. The whole process of getting the sight set up and dialed in was “kind of tedious,” he said. But after that “it performed well.”
Ray said the sight mounted easily to his shotgun, but the on-off button and brightness controls “do not function well. The lack of dependable controls is its downfall.”
Hits: “Reticle is crisp.” –Ray
Misses: “Not user-friendly.” –Phillips