Photo by Dusan Smetana Looking ahead, the question on everyone’s lips is: Where will I hunt and fish? Here are... 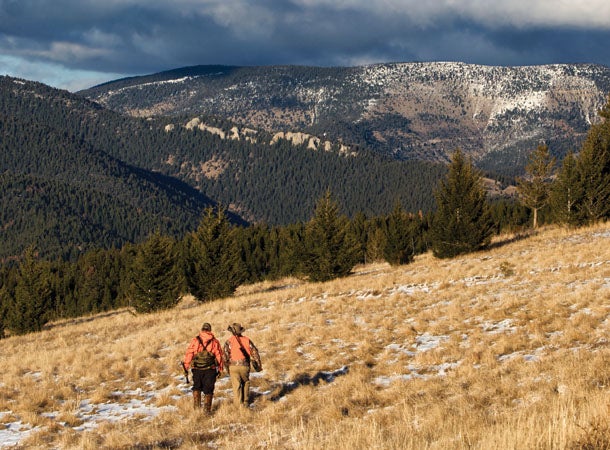 Looking ahead, the question on everyone’s lips is: Where will I hunt and fish? Here are the newest, most improved, and up-and-coming hunting and fishing hotspots for ­every state–the vast majority open to the public.

5. Maine: Region B, Turkeys
Bird densities are soaring in the heart of Region B, which has 22 WMAs, and this year residents and nonresidents can shoot four turkeys (spring and fall, up from two) for just $20.
6. Runner-Up: Aroostook River
New access at Forbes Pit enables easy day floats for brook trout.

7. Maryland: Upper Chesapeake Bay, Striped Bass
In the 57 years of state surveys, 2011 saw the fourth-best spring spawn. Members of that bumper crop should now be at or over the 18-inch minimum.
8. Runner-Up: Mount Nebo WMA
Better grouse and woodcock habitat.

11. New Jersey: Lenape Farms, Whitetails
This new 5,000-acre state acquisition used to be a private high-fence hunting club. The fence is now mostly down, but deer numbers are still up.
12. Runner-Up: Del-Jersey-Land Reef
A sunken ship teems with fish, 28.5 miles southeast of Cape May.

17. Pennsylvania: Big Spring Creek, Trout
On the heels of a $587,000 habitat project, a 2013 study showed that Big Spring now has the highest combined biomass of wild browns and rainbows in the commonwealth.
18. Runners-Up: WMUs 2C and 4B
More black bears, expanded seasons.

33.Kentucky: Lake Cumberland, Bass and Trout
Rising water that’s flooding new growth has set the stage for a bass boom above the dam, while cooler tailwaters should vastly improve trout fishing below.
34. Runner-Up: Land Between the Lakes NRA
Better habitat for big bucks.

47. South Dakota: James River Corridor, Pheasants
As part of a water-­quality enhancement initiative, farmers have enrolled 85,000 acres of private land in CRP, all open to hunting via the state’s Walk-In Area Program.
48. Runner-Up: Lake Oahe
Lots of 10- to 20-pound pike.

51. Alabama: Alabama and Tombigbee River Systems, Crappies
Fish from the banner crappie spawn of 2010 have matured to slab size, many topping 15 inches.
52. Runner-Up: Southwest ­Alabama
A brand-new February deer season will hit the heart of the very late rut in this region of the state.

69. Tennessee: Center Hill Lake, Muskies
Native muskellunge are making a comeback in much of the state but especially in the headwaters of Center Hill Lake, thanks to prime forage and habitat, plus a 50-inch ­minimum-​size limit.
70. Runner-Up: Bear Hollow WMA
Aggressive management has produced lots of gobblers.

73. Virginia: Piedmont Region, Turkeys
Thanks to consecutive banner hatches, turkey numbers appear to be up by an astounding 25 percent, making this top region even better.
74. Runner-Up: South Holston Lake
Keeper walleyes (18 inches or better) now make up almost half of this lake’s catch.

75. Alaska: Mat-Su Valley, Moose
Moose numbers are rebounding from a brutal 2011-12 winter. Add a mild winter, and 2014 could be a banner year in the valley.
76. Runner-Up: Chena Slough
Restoration projects will revive the urban grayling fishery.