Getting the help you need to the job site or transporting a group of hunters into the field can be... 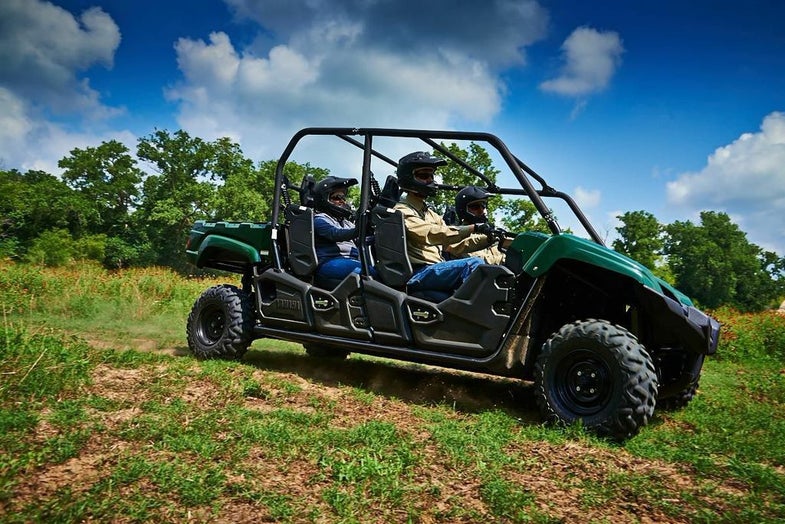 Getting the help you need to the job site or transporting a group of hunters into the field can be a burden. That’s where a big, off-road vehicle such as the Yamaha Viking shines. Yamaha released the new Viking line just a year ago and now it has added a second version to the family in the 2015 Yamaha Viking VI. I had an opportunity to test this new rig on a few fresh-cut trails just outside Austin, Texas.

The Viking VI now holds three more passengers in comfortable individual seats with secure three-point seat belts. The dynamics of the second row of seating are the same as the front with the center passenger being positioned rearward five degrees from the opposing seats to the left and right. This simply gives each rider plenty of shoulder room. Being a larger rider, I never felt uncomfortable or cramped in the middle seat. Every sculpted seat contours to its passenger to give optimal support needed for long days in the machine. Yamaha made the front-seat headrests hollow for the rear-seated passengers to gain better views of the trail in front of them. The seats in the rear are also positioned 25 millimeters higher to add to the rear passengers’ view.

Yamaha also focused on duplicating details such as the walk through design of its cab for the 2015 Viking VI. The ability to safely and quickly exit either side of the machine was an important goal that I felt had been met with the Viking VI. I am just a bit taller than the average rider, and the floor space for my feet was sufficient. However, sitting on the left or right meant that the seat bolsters in front of me would rub into my knees. The floor in the Viking VI has a textured surface to reduce slipping should you get into a wet or muddy terrain. The floor has drains in it to carry water away.

The fuel-injected 686cc 4-stroke, liquid cooled, single overhead cam engine in the 2015 Viking VI received an updated intake system, which brings in fresh air from under the dash. The air filter size has been increased and fuel injection mapping has been adjusted for the Viking VI to add adequate power for heavier loads. Serviceability is important on a working machine, and with dual foam air filter elements that can be cleaned and reused, the service visits to the local mechanic as well as replacement part costs have been reduced. Liquid cooling for the engine was increased by volume to keep the temperatures down during those hot workdays. I never felt engine heat as a passenger in the second row of seats primarily due to the engine being mounted low and to the rear of the machine.

The Yamaha Ultra-matic fully automatic belt driven transmission has also received calibration adjustments to handle the added weight and cargo capacity. This design has made the CVT system on all Yamaha Off-road vehicles extremely reliable. During the slow pace of trail riding, while loaded with three or more passengers, our test rig gave up smooth power delivery without hesitation. With a simple spin of the dash-mounted selector switch, the Viking VI turned into a four-wheel drive, go-anywhere ride. This selection gives you plenty of traction in any reasonable riding situation. For the 2015, Viking VI Yamaha added a new redesigned Big Horn tire from Maxxis tires. To maintain light steering and control, the internal structure of the Maxxis Big Horn has been changed to fit this longer and heavier Viking. The Big Horn tire has always been known as a tough and reliable shoe for any machine and having this tread on the Viking VI completes a solid performance from the engine to the ground beneath it.

The suspension on the 2015 Yamaha Viking VI also had a few design changes. Strength was added to the control arms in the form of gusseting to give extra durability for the larger machine. A-Arm travel is set at 8.1 inches and a new dual rate spring was added to both the front and rear shock absorbers to smooth out the roughest trails or ranch roads.

With a center ground clearance of 11.4-inches, we were missing most of the trail debris on our ride. I was able to high center the Viking on a steep bank, but with the sides of the lower frame raised from the center to the side almost 60 millimeters, the Viking was not going to be stuck and the slide off of the embankment was very easy. The extra lower side clearance is definitely a plus for rough terrain.

Getting this longer Viking VI moving down the trail was not an issue and with the dual piston four-wheel disc brakes at the ready, stopping the machine was not an issue. Even loaded with three additional riders, the Viking VI felt very much in control and braking was predictable.

Of course Yamaha will also offer optional power steering for the Viking VI. The electronic power steering on our test unit gave a very smooth but not too light steering feel when traversing slower trails. This feature will come in real handy when the seats are filled in this Viking VI. Building the drivers’ confidence in the machine is a must and Yamaha works hard at doing this with every machine they release.