The Ultimate Teal Gun: What to Use for the First Waterfowl of Fall

Bluewing teal hate cold weather and migrate before the first hint of fall, flying as far as South America. The only way to give hunters a crack at these early travelers is to set early teal seasons in September. 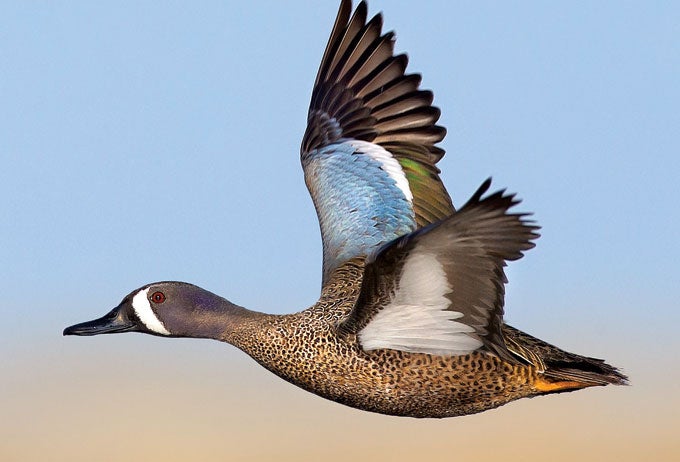 Bluewing teal hate cold weather and migrate before the first hint of fall, flying as far as South America. The only way to give hunters a crack at these early travelers is to set early teal seasons in September.

Teal numbers remain high, some 60 percent above the long-term average. In response, the feds raised the teal season bag limit from four to six last year for the first time since teal season began in 1965. Habitat conditions looked good in the northern U.S. and Canada heading into nesting season. Barring drought or population crash, the limit should be six again this year, a number sure to cheer hunters and ammunition manufacturers alike.

A teal hunt is like a regular duck hunt scaled down and sped up. It’s not that teal are fast, though—in fact, at an average speed of 30 mph, they are among the slower ducks. They look fast because they’re small, and they fly erratically and down on the deck. They also arrive unannounced. The splash of ducks landing in decoys is often the first warning they give. On the water, they seem as surprised as you are to discover they have landed, and they may take off just as quickly.

Teal will also dip over decoys as if landing, then bank in unison like a school of baitfish and fly on. The best shooting advice is to be ready to be caught off guard. Work on your mount now, before the season, both with an unloaded gun and by shooting low-gun skeet and sporting clays. You need to be able to bring the gun to your face quickly and smoothly when teal take you by surprise.

Pick one bird out of the bunch (I look for one at the edge; teal fly so tightly packed it’s easy to knock down two or three with one shot if you’re not careful) and focus on the beak just as you would with a big duck. Remember they are slower and closer than they appear to be.

A bluewing weighs a pound and measures 16 inches long. Moderate loads of No. 4, 5, or 6 shot through an Improved Cylinder give you the necessary pattern density to put enough hits on the little ducks. If you do miss a teal, reload. They often swing back and offer you a second chance, and a duck that gives do-overs is precisely what you need on the first water­fowl hunt of the season.

Teal are hard to hit, but you don’t need a lot of gun to down one

1) Lightweight: You’ll need to grab it quickly when teal appear out of nowhere. Also, you won’t need weight to absorb the recoil of nonmagnum loads of 4 or 5 steel shot.

2) Black synthetic stock: DEET wont’ discolor it as badly as it will a camo stock (if you’re not drenched in buck dope, you’re hunting in the wrong place.

4) 12-gauge: As our gun tests in the July issue showed, 12s pattern more efficiently than 20s, and you need every possible pellet in your pattern to ensure hits on the small vital area.

5) Improved cylinder (or even a Skeet choke): Because most shots at teal are up close.

6) 28-inch barrel: Teal are small, but you shoot them the same as you would any other duck, and 28 inches is the right combination of smooth swing and fast reaction for ducks over decoys.

Ideal models include the Benelli M2, the Beretta A300 Outlander, and the Browning Maxus.