When bucks are locked down, try these four far-out approaches to get within range. 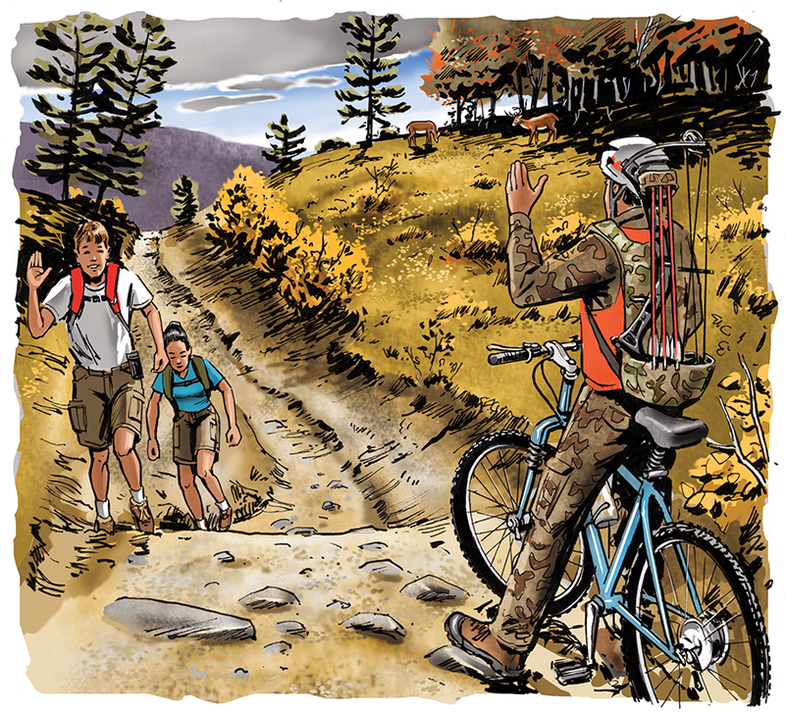 When bucks are locked down, try these four far-out approaches to get within range.

When deer movement freezes up during lockdown and your usual tactics fail, it’s time to get creative. First locate a buck and doe in an isolated spot or choose a site where you’ve found breeding pairs in the past. Good areas include the edges of rut chasing grounds, clusters of cedars, islands of brush in fields, dry hummocks in swamps, isolated patches of tall grass, thickets below pond dams, and clusters of storm-felled trees. Then try one of these oddball tactics.

Go For a Spin
In high-traffic areas, especially public land, deer see hikers, joggers, and foresters more than they see hunters. They know how to differentiate between the two­—and know which one to avoid. A typical hunter’s sneaky movements instantly spell danger, and they flee. But they’ll often just ignore hikers, runners, and bird-watchers. So imitate these by walking casually, jogging, or riding a bike into or close to shooting range. Pick a spot near the deer that offers a bit of cover, such as a brushpile, ditch, or blowdown, where you can stop, take a breath, and make the shot.

Take it slow. Running or biking hard in heavy hunting clothes and stiff boots puts more of a strain on your heart and lungs than exercising in sneakers and shorts. If you can’t catch your breath you’ll be useless when it comes to making the shot.

Rattling is fun, but often during lockdown a buck will ignore it because he already has a doe. Instead, call the doe. Lure her in, and the buck will follow. Blow a plaintive fawn-in-­distress sound. If that doesn’t work, appeal to her competitive instincts with a doe bleat. She’ll step out to see who wants to steal her mate. In both cases, call softly at first. A mating buck and doe want most to be left alone. You don’t want to blast your call loudly and push them out. If soft calls don’t work, then you can slowly crank up the volume. If that fails, blow a cottontail-in-distress call loudly. Both deer may step out startled and offer a shot, or they’ll blast out in a blur. You’ll either connect on them or push them to a new and hopefully more accessible spot where you can relocate them and try again.

In farm and ranch country, deer are accustomed to vehicle traffic. A breeding pair will often ignore rumbling trucks, rattling tractors, and earth-shaking combines. So, hitch a ride on a farm vehicle from a friend or the landowner to an island of brushy cover, a hedgerow, a patch of unharvested corn, or other spot where there’s enough cover near the pair to hide in as you ready for a shot. Slip out the passenger side while the vehicle is slowly rolling—at your own risk, of course—using the tractor or combine to mask your movement. Belly crawl into position as needed, and then make the shot.

Boat to Your Buck
If you pinpoint a breeding pair along a river, on an island, or in a brushy area at the base of a dam, break out your johnboat—or rubber raft or kayak or canoe. Drift, paddle, or scull downstream until you can beach the vessel and stalk into range. Just don’t boat too close to your buck and doe. A clanking paddle or canoe bottom scraping across river rocks might alert the breeding pair. You want them totally unaware when you pop up from the bank and take your shot. This oddball tactic yielded a tall 8-pointer in the upper 130s for me during the 2010 muzzleloader season in West Virginia when I sculled down a lake, stalked up the bank, crawled in close, and peered over the edge of a dam for the shot.