Silent Fields: Where Have All the Pheasants Gone?

The best way to kill pheasants? Combine brutal ag practices and policy with a few harsh winters. You'll never need a shotgun or a dog again. 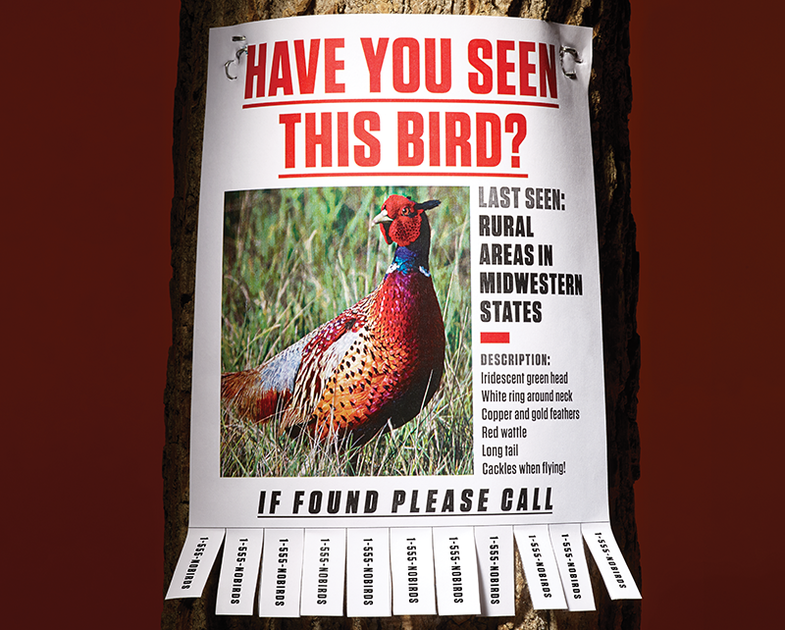 Two years ago I shot a rooster pheasant that would qualify for any Boone and Crockett bird record book. Its freakish 29 1⁄2-inch tail feather was a lock to win a snowblower or shotgun in any local pheasant-feather contest. I was a few years too late. No one holds tail-feather contests in Iowa anymore. There are no VFW hunter’s pancake breakfasts on opening day, no more dog trailers with out-of-state plates parked at small-town motels in November. A whole upland hunting culture has vanished in less than a decade.

Last season, hunters bagged just over 100,000 pheasants in Iowa. As recently as 2004, the harvest was 1 million. Up to 140,000 nonresident hunters visited the state annually. Back then, thousands of acres of CRP fields held pheasants that flushed in waves. Most landowners let strangers on their land for the price of asking. For a pheasant hunter, it was heaven.

The trends that ruined our pheasant hunting aren’t confined within the state’s borders. Drought, severe weather, and a loss of about half of its CRP acres knocked South Dakota’s pheasant population down 64 percent in 2013. North Dakota was down 30 percent.

We took away the habitat. Weather did the rest. Beginning in 2006–07, Iowa endured an unprecedented six winters out of seven with snowfalls far above normal, each one killing 20 to 50 percent of the adult pheasant population. Cold, rainy springs and floods that ruined nesting seasons followed. When you have good habitat, bad weather has an impact on pheasants. When you have poor habitat, bad weather is disastrous.

Finally, partisan wrangling in Congress held up the reauthorization of the 2012 farm bill for two years, denying funding for conservation programs at that critical time.

Ringneck Relief
The farm bill is finally law, and it contains several provisions that will aid farmland wildlife. Most important, it requires farmers to engage in conservation practices on wetlands and highly erodible lands to be eligible for federal crop insurance. The bill also reauthorizes the Conservation Reserve Program and helps protect native prairies where they still exist. It adds $40 million for Open Fields, a public-access program that improves private habitat and opens those areas to hunters.

The Iowa Department of Natural Resources has its own smaller version of Open Fields, the Iowa Habitat and Access Program, and it’s partnering with Pheasants Forever and the U.S. Department of Agriculture on Pheasant S.A.F.E., a 50,000-acre private-land initiative geared toward ringnecks. The DNR has also intensified pheasant management on selected public areas, while PF works with surrounding landowners to create islands of pheasant habitat. Since only 1 percent of Iowa’s land lies in public ownership, the pheasant’s survival ultimately depends on ­favorable private-land management.

Canaries in the Cornfield
The loss of one of the last, best places to hunt wild pheasants is bad enough, but pheasants are also the canaries in the cornfield. Plowing up grassy pheasant habitat—especially on steep hillsides and along creeks and waterways—speeds erosion of the richest topsoil in America. Without prairie plants and wetlands to filter runoff, soil and agricultural nutrients and chemicals pollute our lakes and rivers and flow all the way to the Gulf of Mexico, where Midwestern nutrient runoff contributes to the algae blooms that have created a low-oxygen dead zone the size of Connecticut. The loss of flowering prairie plants and hayfields hurts already declining populations of the bees and wasps that pollinate much of our food. Monarch butterfly numbers are crashing, too, in part because the larvae depend on milkweed, a native plant crowded out by agriculture.

Hope for the Thing With Feathers
Todd Bogenschutz, the upland wildlife research biologist for the Iowa DNR, believes the state still has enough habitat to support half-million-bird harvests if the harsh weather ever eases. In the meantime, the string of hard winters has him rethinking pheasant management. Bad winters seem to be the new normal. “We used to figure on one bad winter in 10, and we focused more on nesting cover,” he says. “We need to plant more winter cover like switchgrass, plums, and cedars that can stand up to heavy snow.”

Tom Fuller, who is Pheasants Forever’s Iowa state coordinator, takes an optimistic look into his crystal ball and sees a more diverse and healthier landscape in Iowa’s future. “The big blocks of grass that produced the pheasant boom of the 1990s are going away,” he says. “Future set-asides will be strategically targeted to let land remain in production while reducing erosion, slowing nutrient runoff, and providing pollinator habitat with grasses, wetlands, and stream buffers—all of which happen to be great pheasant habitat.”

When our crash first came, many hunters traded their shotguns for bows. The callous ones dumped bird dogs on country roads. My friends at Great Plains Pointer Rescue tell me they have seen a huge increase in the number of senior pointers left at shelters, older dogs with no birds to hunt and owners who felt they couldn’t afford to feed them during a recession.

I look at it the other way: I have a bird dog, so I hunt. My shorthair Jed and I are among the few still hunting pheasants. We run into enough to stay interested, and shooting roosters only doesn’t harm populations. Jed is 6 now, and I’m already thinking he will need an understudy in a couple of years. I suppose that makes me an optimist who believes we will realize the price of turning the Midwest into a row-crop monoculture is much higher than the demise of one introduced gamebird, and we will take steps to heal it. Maybe it just makes me like the quail hunters I met in Ala­bama, dedicated dog men who grew up in an era when quail were everywhere. Their birds are even further gone than ours, but they can’t give up their dogs and will hunt all day in hopes of finding a single wild covey.

I’ll keep hunting pheasants, too, and find a few, and hope for the day they come back.