Set up in doe funnels now. 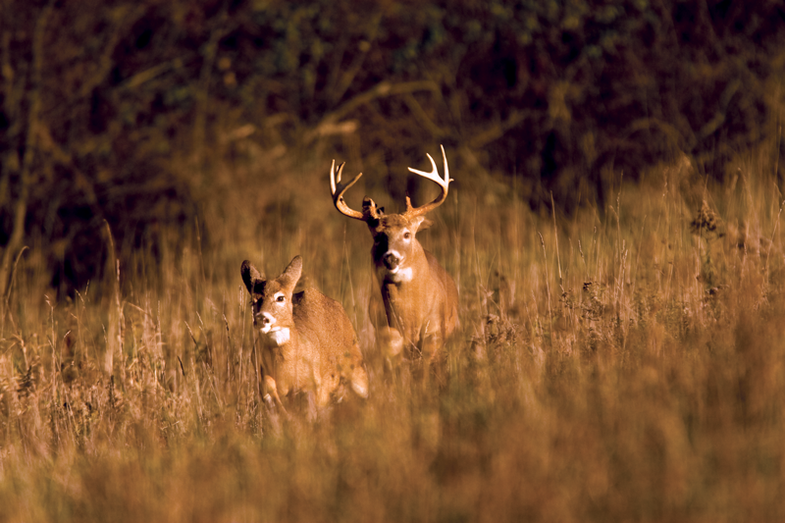 Chase Place A grassy swale makes a likely funnel for bucks to find and run does. Photo by Lance Kreuger.

One of the reasons Ohioan Mike Rex has tagged 19 P&Y-class Buckeye bucks is because he never stops learning from the deer themselves. He got an eye-opening lesson during the 2008 whitetail rut.

Rex was in a treestand at the head of a wash, a natural pinch point for deer. As he waited for a monster whitetail he knew was in the area, a smaller 140-class buck came along and lay down nearby.

“Since this wasn’t a bedding area, I suddenly realized the buck was doing the same thing I was,” Rex says. “Only, he was hunting a hot doe.” Sure enough, when three does passed by 45 minutes later, the buck lit after them.

Find Doe Funnels
Any head of a wash makes a good funnel, for example, but one situated between the feeding and bedding areas of a doe family group is especially good now. Same goes for saddles, strips of timber, fencelines, and a host of other bottlenecks; the best ones now will be along or adjacent to the best doe travel corridors, where a buck’s odds of intercepting a potential mate are highest.

If you’ve spent all your time up until now scouting for bucks, you may not know exactly where does feed, bed, and travel on your property. If that’s the case, take a day off from hunting and scout your ground thoroughly. Locate the most heavily used trails; these are made by doe family groups. Check brushy knolls and pine or cedar thickets for different-size beds clustered together. Glass crop fields and open oak stands for feeding does in the evening. While you’re at it, carefully identify and mark the best bottlenecks nearby. These are the spots where rutting bucks will try to intercept does—and where you can pinch your next trophy.