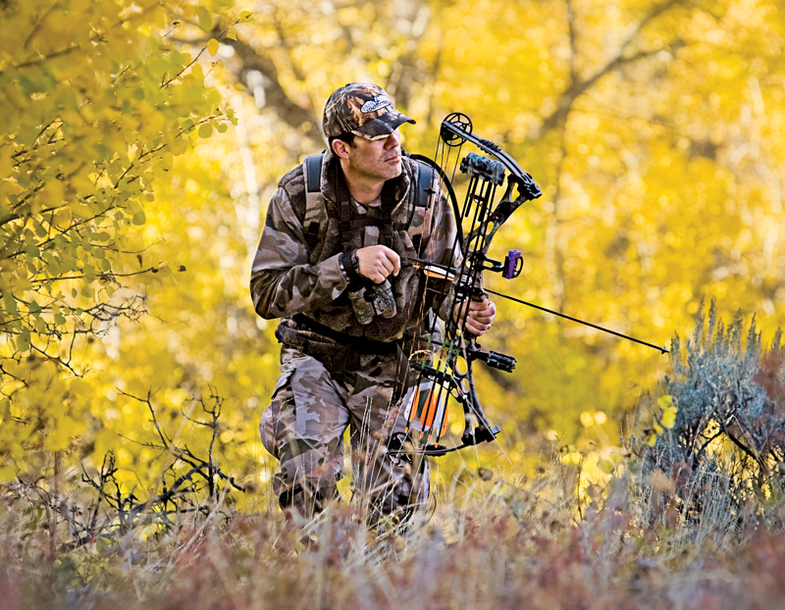 When Mark Kayser arrowed a 320-inch Montana bull last October, it was the 35th elk he’d had in bow range. Not that season. Not on an extended trip. But in one afternoon. “They were following a ravine toward a feeding area,” says the Wyoming expert, who hosts the Extreme Pursuits TV show. “I was tucked against a small tree as they filed past and had to wait for 34 cows to go by before I could shoot the bull. He was the last in line.”

It’s not classic peak-rut archery elk hunting, with wild-eyed bulls screaming into bow range, but the post-rut can be just as exciting, Kayser says. “It’s pretty common to encounter lots of animals, so neglecting this period is a big mistake. But the typical rut tactics rarely work. You have to change your approach.”

Here’s what he recommends:

1. Drop Down the Hill
Post-rut elk aren’t at the high altitudes they favored a few weeks ago. “Snow will usually push them down from the high country by late September. Plus, the elk are hungrier, and the high-quality food they need typically grows lower. If you’re hunting the mountains, get down in the foothills to find elk now.”

2. Pinpoint the Groceries
“One classic post-rut food source is an alfalfa field. These are usually located on private land, but the surrounding mountains are often public, so you can catch elk moving from bed to feed, and vice versa. If alfalfa isn’t nearby, look for elk feeding in small creekbottoms and drainages, which have lush food later in fall.”

3. Back Off Your Calling
“Post-rut bulls are worn down from six weeks of breeding. They’re not going to come charging in to a bugle. And they’ve already got a bunch of cows around them. I use a bugle tube at first light to locate a bull. When I get a response, I move quickly toward the herd. I only use a cow call to check when I’m getting close.”

4. Set Up in a Funnel
“One great thing about hunting mountains and foothills is I can usually find a ravine or canyon that elk will follow to and from food. If there’s a good trail cut into that funnel, then it’s just a matter of finding decent cover, playing the wind, and setting up for a shot.”

5. Be Prepared and Be Patient
Though post-rut elk will remain faithful to a food source and a general bedding area, they may have more than one route between the two. “I don’t count on the animals using the ravine I’m set up on every day,” Kayser says. That’s why he’s always prepared to stick around awhile. “I carry a lightweight rain suit in case the weather turns; it’s also handy for heavy morning dew. And I carry a daypack with enough gear to spend the night on the mountain if I have to. I’m confident that if I stay put and stay patient, I’ll get a shot within a few sits.”