It’s time to get out of the water. Delayed migrations mean mallards and other ducks feed in harvested ag fields once they finally wing south, but ditching your waders is only the start. 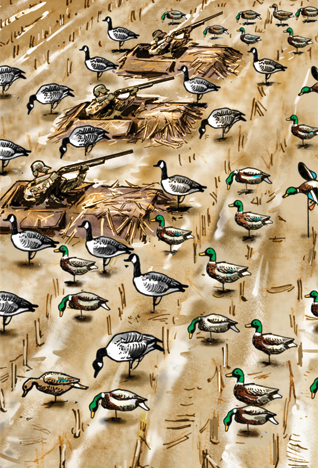 When cold weather comes and marshes freeze, it’s time to gather up your decoys… and get ready for the best duck hunting of the season. Late-season weather concentrates ducks on remaining open water and drives them to feed on harvested fields of wheat, peas, corn, and beans. Dry-field hunting began as an upper Midwestern technique, but the method has spread as far south as Arkansas beanfields as hunters adapt to later migrations.

You won’t find just a few dead-end ducks at the tail of the migration, either. You’ll see swarms. Most hunters believe the main mallard flights come later now either because of climate change or simply due to the availability of food and open water in the northern parts of the flyways. As long as snow doesn’t bury the fields and there’s open water on a river, reservoir, or power-plant cooling lake nearby, ducks have no reason to fly farther south. There’s no scientific proof, but Scott Yaich, chief scientist for Ducks Unlimited, says, “The literature hints that it’s the case that ducks are migrating later.”

Take the hint. Hit the fields. Here’s how:

No. 1
In most parts of the country, the best field duck decoy is a goose decoy. They’re highly visible, and ducks will come in to geese. Use either Canadas or snows, depending on which you have in your area. Put them around the blinds to help hide them. My spread has a mix of compact Primos Lesser Canada full-bodies ($257 for 6; primos.com), and Real-Geese Pro Series II silhouettes ($225 for 12; ­webfoot​decoys.com).

No. 2
Your floater duck decoys work on dry land. Run two or three drakes or more to every hen, because brown decoys disappear in a field. Increase visibility by getting the decoys up off the ground. Take a 3- to 4-foot piece of stiff wire and bend one end around the keel to hold the decoy. Use the rest as a stake. Or you can buy DCVR Amphibious Decoy Stakes ($45 for 12; ­dcvr​­outdoors.com).

No. 3
If you’ve got some leaky decoys you want to convert to permanent field blocks, cut off the keel, cut a hole in the bottom toward the front, find a balance point, then drill a small hole in the top and set it on a GHG Universal Motion Stake ($25 for 12; ­greenhead​gear.com). The decoy will move realistically in the wind.

No. 4
Where legal, spinning-wing decoys are very effective in dry fields. They encourage ducks to get down into the spread quickly instead of circling. Put them where you want the ducks to land. Geese hate them, though, so if you’re hunting both geese and ducks, you need a remote control—or set the spinners near the blinds where you can pull them down if geese show. I use a Mojo Mallard with a remote ($180; ­mojo​­outdoors.com), but you can save money by going with a Baby Mojo Mallard ($80) or even a Mojo Teal ($60). Ducks don’t care what kind of duck it is as long as the wings spin.

No. 5
The more decoys you set out, the more visible and attractive your spread. If you’re using ducks and no geese, put out five dozen to six dozen. You can make one landing hole, as shown here, or more than one. Ducks in fields just need a little quacking and some feeding chatter.

No. 6
Invest in a layout blind, which blocks the wind and hides you well once you cover it with stubble. There are several good ones on the market. The Avery Finisher ($300; averyoutdoors.com) and Cabela’s Ultimate Northern Flight ($300; ­cabelas.com) are among the most comfortable. If you’re hiding in soybeans, you’ll need to use dark brown and gray raffia fiber like Avery’s KillerWeed ($30; avery​­outdoors.com) because there usually isn’t much usable stubble around.

No. 7
Location is key. You have to be in the field the ducks are using or in a field on their flightline. Track ducks in the air or look for them working over fields, and be aware that ducks may feed up to 20 miles away from the roost. In northern states, ducks prefer corn to beans, but farther south they will hit beanfields. If you see geese sitting in a field, glass it for ducks. In warmer temperatures you can scout afternoons and hunt the next morning, but in very cold and clear weather, ducks will usually wait and feed once in the afternoon. On days with snow, sleet, and wind, it pays to be out there early.

No. 8
When you can’t get into the field where the ducks are headed, find one beneath the flightline. For optimum visibility, set your decoys on the highest point you can, and keep your setup away from any fencelines or brushy areas that ducks avoid because they may hide predators.

No. 9
Shooting big, fat, fully feathered mallards in the cold means you should use shot at least as large as No. 2 steel at 1450 fps or more. I shoot a 3-inch 12-gauge with a Modified choke for almost all waterfowl, including field ducks, but Improved Cylinder could work in field situations because most shots are fairly close when ducks are decoying well.