Welcome to Roosterland: Scenes from a South Dakota Pheasant Hunt

The photos and story behind a classic South Dakota pheasant hunt. 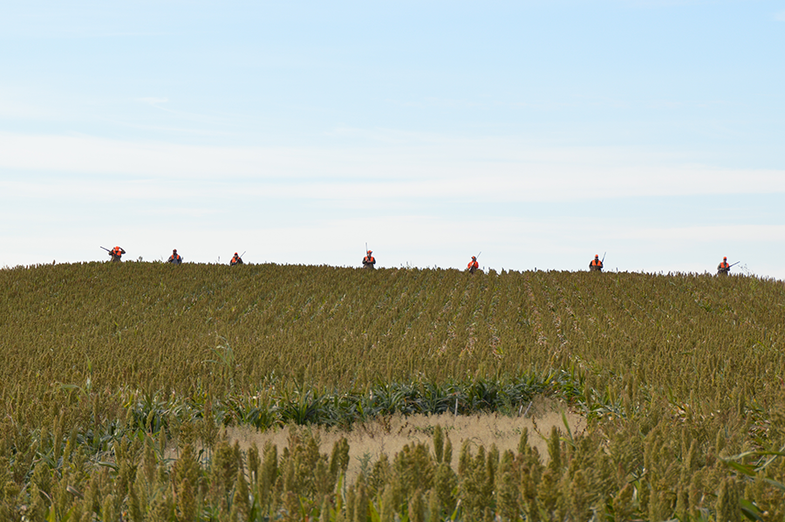 When our crew of hunters stepped out of the shuttle—an old school bus painted dark green and equipped with two gun racks inside—a strange thought hit me: We’re not so different from the gun dogs. Let me explain.

Minutes earlier, as we drove past strips of corn and sorghum, the sight of a lone ringneck pheasant running away from the bus was enough to send one person in our party, Laci Warden, in a fit of laughter that was equal parts giddy and crazy. We all sort of stared at her. “What, guys?” she said. “I’m excited!” Soon the rest of us in the bus were cracking up, too. Which brings me back to the dogs.

The second they sprung from their crates, they were hysterical—literally pissing and shitting with excitement. It was as if they were begging to be released into the field.
They wanted to kill some pheasants. Just like us.

Turns out, none us had to wait long. Ten minutes into our first push, one of our guides yelled: “ROOSTER ROOSTER!” Shotgun cracks replied. One of the Labs rushed to the dead bird, and soon our first pheasant of the trip was in the game vest.

Along with a few other outdoor writers, I’d been invited to R&R Pheasant Hunting lodge in Seneca, S.D. The invitation came from Winchester Ammunition. This fall they rolled out a brand-new line of ammo, Rooster XR—the upland cousin of their award-winning turkey load, Long Beard XR. On a gobbler hunt last spring, I witnessed the range and lethality of Long Beard. I figured if the Rooster load were half as deadly, I’d be coming home with a cooler of birds.

Eight of us moved slowly through the sorghum. It seemed like we couldn’t take 10 steps without flushing birds, and there weren’t many that got away—that is, unless the pheasants were smart enough to flush in front of me. I took the outside-right edge of the push and missed the first few shots I took—partly due to nerves, but mostly from rusty shooting. Then about midway through the push, one rooster jumped about 10 yards ahead of me and flew straight away. I mounted the 12-guage, fired, and saw the ringneck tumble down. It was a relief to get that first one out of the way. When we reached the end of the strip, our guides’ vests were bloated with birds—close to 30 in all. We’d all heard how good the pheasant hunting here could be, but I don’t think any of us expected it to be quite this good. If you had asked any of us at that moment what was on our mind, it would’ve gone something like this: Can we do it again?

I love to hunt with dogs, but never more so than on a pheasant hunt. There are times when shooting at birds almost feels like a distraction from getting to watch the dogs work. The Labs weaved through the tall cornstalks with a seemingly limitless reserve of energy, and were numb to the stalks that cut and bloodied their faces. On one push, there was a moment when the German shorthair literally dove into cover after when the scent of a rooster had caught her nose. The dense patch of sorghum quivered as she rooted around for the bird, and when it flushed I dropped the rooster without even a second to think about the shot. It’s funny how invincible you feel after moments like that—moments when everything comes together so perfectly. You forget about every miss that’s behind you, and believe you’ll make every shot that’s ahead.

Over the course of the day, I killed my share of birds, but a couple others in our group—namely Kyle Wintersteen, an outdoor writer, and Rafe Nielsen, a product manager for Browning—were absolute deadeyes. It was a pleasure to watch them shoot. They knocked down pretty much every bird that flushed before them. During our second-to-last push, the dogs flushed a bird that was probably 35 yards away, and by the time Wintersteen mounted his gun the pheasant had easily put another 10 yards between us. Wintersteen connected on his first shot, and the bird was long dead before it hit the ground. Even our guide was impressed.

“That shit,” he yelled, referring to the ammo, “is killer!”

A bit more about that “killer” ammo real quick, because it is innovative what Winchester has done with it. The shot inside a Rooster XR load is held together in a block of hardened resin (as shown in the photo above). When you fire the shot, the resin shatters and forms a buffer that protects the pellets from deformation as they leave the gun barrel. The round pellets fly straighter and tighter—and hit birds with devastating results. One afternoon, after a hunt, we fired Rooster XR at paper targets from 10, 20, 30, 40, 50, and 60 yards. Conditions were far from ideal, courtesy of a 30-mph crosswind. Still, as you can see in the photo collage of our targets (below), the results are pretty impressive—almost as impressive as the number of roosters we were beginning to pile up.

Clockwise from top left: Targets from shooting Rooster XR at 10, 20, 30, 40, 50, and 60 yards. The patterns would’ve almost certainly been tighter had it not been for the 30-mph crosswind.

Although it was never easy to leave the fields at the end of a hunt, there are certainly worse places to return to than the R&R Pheasant Hunting lodge. The cooking was dynamite, the bar was well stocked, and the beds were comfortable. Nicest of all, though, was how welcoming owner, Sal Roseland, and his family were. They treated us like family. Almost every piece of decoration at the lodge—from the full-body wolf mounts to the shed chandeliers to the mural painted on a buckskin—were gifts from guests. The Roselands have created a special kind of place—one that makes people want to leave something behind if only to have a connection after they’re gone.

The dogs barking from the kennels woke us up the next morning. “A great alarm clock,” Nielsen said. Our hunts in the corn and sorghum strips weren’t nearly as explosive as the day before. The wind howled all morning, and the dogs struggled to pick up any scent. In the afternoon, though, we hunted a row of evergreens and junipers, thinking that some of the birds might’ve gone there to escape the wind. They did, and our guns blasted for the entire push.

We had time for two more pushes on our last morning. The air was cool, and the wind had calmed. You couldn’t have asked for better conditions. Unfortunately, the success I’d had in the previous two days vanished during our first push. I was way behind on most of the shots I took. I did better on our last push, though. We all did. That last strip of corn was absolutely covered with pheasants. It seemed as if every 10 yards the dogs would flush four or five birds. When we neared the end of the strip, Roseland, who was our guide that day, told us to stop. All of the roosters that we’d forced down the strip during the push now had nowhere to go but up. My grip on my gun tightened as we waited.