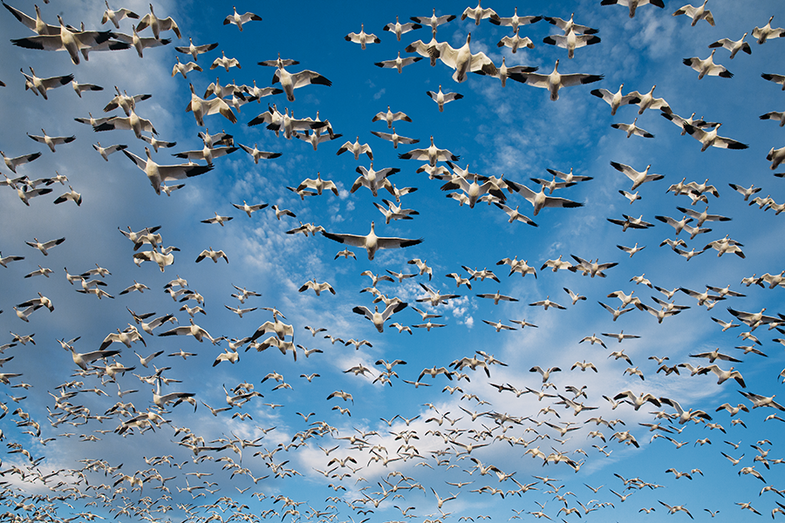 Conservation through superior firepower: It’s the mission of the spring snow goose gun. The USFWS allows unplugged shotguns along with electronic callers and no bag limits during special spring conservation-order hunts, which aim to reduce numbers of overpopulated greater and lesser snow geese that are destroying their fragile tundra nesting grounds. Those extra shells help hunters take more birds out of flocks that can number in the thousands.

The conservation order has been in effect for 15 years, during which we have slowed, but not yet stopped, the growth of snow goose populations. That means goose seasons should run into April for years to come.

Spring snow goose hunting requires setting huge decoy spreads, often in muddy conditions. When that much effort pays off and a huge flock commits, you want the right gun in your hands.

The only action you really don’t want to have on a spring hunt is a break action because two shots is nowhere near enough. Otherwise, pumps and both gas and inertia autos all have their strong points. While I prefer the low recoil of gas guns, there’s a strong argument to be made for hardier pumps and inertia guns when mud or dust can cause problems.

Only Mossberg offers a gun specifically for spring snow geese, the gas-operated 930 with a 13-round capacity and a white camo pattern. Plenty of other guns can serve, however. Inertia models like the Benelli SBE, M2, and Vinci; the Franchi Intensity; and the Browning A5 shrug off mud and dirt. Among gas guns, Beretta’s A400 and Winchester’s SX3 are soft-shooting and reliable. Pumps are, of course, practically unstoppable. I’d probably choose the Browning BPS or the Benelli Nova if only because they are the heaviest, and you will get pounded shooting waterfowl loads through fixed-breech guns.

Snows are neither as big nor as tough as Canadas. Lesser snows weigh 4 to 6 pounds; greaters are slightly bigger at around 7 pounds apiece. There’s no need to beat yourself up with the recoil of 31⁄2-inch shells or super high-velocity ammo; remember, with no bag limit, you may fire boxes of shells on a good day. A 3-inch shell at 1500 fps is fine. Steel No. 2 shot works well for decoying geese, and BBs or 1s do the job on days birds won’t finish.

Electronic callers and improved decoy spreads make it much more common to shoot snows at close range than back in the days of rag spreads when 50- and 60-yard shots were the norm. An Improved Cylinder choke is enough for most over-decoy shooting. Modified gives you a tighter pattern for follow-up shots as birds flare when the shooting starts.

Removing the plug increases the capacity of most shotguns to five shots. That’s enough for the initial volley when a flock decoys, but it leaves you holding an empty gun when that confused survivor circles back over the spread. The answer is a magazine extension. Of the several companies that offer no-gunsmithing extensions, Nordic Components (nordiccomp.com/retail) makes tubes for a variety of shotguns, starting at $60. They are lightweight aluminum, a definite plus when you start adding the weight of a tube and shells to the front end of your gun. Some hunters go long, adding nine-shell extensions for a grand total of 12 or 13 shots, but seven or eight is the practical limit. After that you’re just adding weight in the form of shells you probably won’t have time to shoot before the birds flare out of range. (Note that states such as New Jersey limit total capacity to no more than seven rounds, and some inertia-operated semiautos may not function if you add more than a pound.)

Regardless of which gun you choose, bring a cleaning kit to the field, or at the very least a can of Break-Free or G96, and a backup gun. On my first late-winter snow goose hunt, blowing glacial loess in southwest Iowa strangled my BPS until it felt and sounded like I was grinding gravel when I worked the slide. When 10,000 light geese come calling, you don’t want to be shooting a single-shot when everyone else has a seven-shooter.

Your trigger hand does more than make the gun go bang. Before that, it must raise the comb of the stock to your face, then tuck the butt into your shoulder pocket and keep it there. Many hunters make that move too hard and fast, whipping the gun to their face, then slamming it back into their shoulder, causing the muzzle to dip. That pulls the gun off target. Don’t let your trigger hand overpower your front hand. Bring the gun smoothly to your face, and then tuck it into your shoulder.