Turkey Reaping: How to Fan a Gobbler

No spring tactic is hotter, bolder, or more heart-pounding than fanning (and “reaping”) open-country gobblers. Nothing’s more controversial, either. Here’s how to tail a tom—safely. 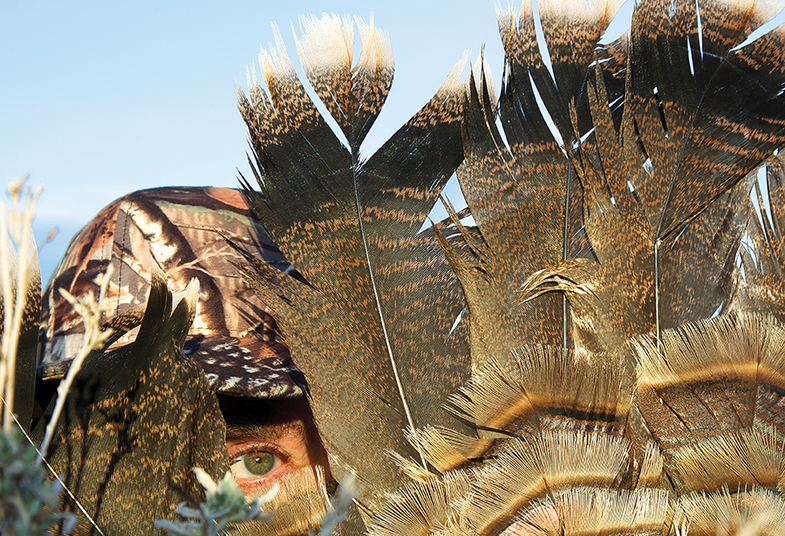 Most western Nebraska turkeys are hybrids but are as capable of son­of­a​­bitchery as any Eastern. This one roosted in a fence­row just beyond our tent camp. Every morning, he pitched onto the prairie with his hens and stayed there all day, half a mile from any cover suitable for sitting and calling. He was driving us nuts.

After two days of trying to ignore him, F&S deputy editor Dave Hurteau and I had to give it a shot. With no place to set up at dawn, we hung back from the roost and watched the Merriam’s-Eastern tom flap down onto the broad sweep of shortgrass, followed by four hens. When they disappeared into a shallow draw 300 yards away, we took off—jogging the first 100 yards, crawling the next, and then belly-crawling. We’d almost made the lip of the draw when a hen’s head popped over the rise ahead of us. I raised a dried fan from a tom I’d shot three weeks earlier in Tennessee, and made a few loud yelps. Then the gobbler crested, about 70 yards out, walking casually at first. I turned the fan with my wrist, making it glint in the sun, and he instantly blew up.

That was it. You could feel everything change—like the vibe in a bar when there’s about to be a fight. Through a small gap in the Tennessee bird’s fan, we watched the Nebraska tom close. He charged to 40 yards, then 30, and then stopped at 25 for a pirouette—his final warning. Hurteau’s crossbow bolt dropped him stone-dead.

Plan With a Fan

Sneaking toward a gobbler behind a turkey fan is nothing new. But there’s been an incredible surge of interest in fanning over the past few seasons. No turkey tactic is more controversial—or effective under the right conditions.

That’s because some gobblers just refuse to come to a call. Henned-up field birds are probably the worst. You can burn a full day—half a season if you’re not careful—on a tom that spends his days strutting in a cow pasture with his girls. Call till you’re blue in the face. He’s not coming. That’s when fanning works best.

But before you reach for any tail feathers, etch this into your brain: Fanning is a tactic for open country only—prairies, pastures, cropfields, and the like. Fanning in the woods can get you killed. Period. You must be able to spot a gobbler from a distance. He needs some time to see your fan coming so he can get good and mad about it. And above all, you need to be absolutely certain that you won’t be in shotgun range of any cover where another hunter could be hiding.

Fanning can work on just about any strutter in a field, but it’s easiest with an aggressive one. “If I could pick the ideal bird, I’d want one stuck in full strut, with a big white head and three or four hens,” says former competition caller Jeremy McCarty, who has been sneaking in on field birds all over the U.S. for the better part of 20 years. “A white head means he’s content but probably willing to fight. That’s a turkey you can kill.”

Most gobblers will defend a 100-yard zone against a rival tom. If you can get inside that range unseen before showing the fan, your chances skyrocket. The key is terrain—a hill, dip, ridge, draw, or rise—that lets you crawl close. Then, from flat on your belly, you simply ease the fan into view. I like to combine my first showing with a few aggressive yelps or cutts on a mouth call. That can get a gobbler’s attention and bring him right to you. More often, you’ll need to ease forward, five or six belly-crawls at a time, slowly twisting the fan as you move. The gobbler will usually meet you, but if he doesn’t, keep right on crawling until you can shoot.

Once Hurteau’s bird dipped into the draw and we could hustle into position, he killed it in a matter of minutes. The evening before, we used a long strip of cedars to hide us as we circled around another flock feeding down the edge of a picked cornfield. When the cedars ran out, we belly-crawled through an open pasture to the crest of a slight rise just off the field—about 70 yards from the birds. When I showed them the fan, a half dozen jakes came charging in, and I put an arrow through the longbeard slowly bringing up the rear.

McCarty started by crawling behind a fan but quickly decided that creeping behind a full-strut decoy works even better. He and his buddies began filming their hunts and dubbed the technique turkey reaping, which yielded the name of his company and website (turkeyreapers.com) and became common jargon among turkey hunters. In 2014, McCarty and wildlife artist Chancy Walters designed a strutter decoy specifically for the tactic, now sold as the Scoot & Shoot by Mojo Outdoors (see sidebar at left).

Reaping is just like fanning, but with a few nuances. “The decoy finishes birds better,” McCarty says. While some toms will charge a fan, many will simply tolerate it as you try to crawl into range. A decoy, he says, usually brings toms running.

Also, you should show a decoy sooner. “Seeing it for the first time inside 60 yards can spook a tom. I typically start between 100 and 200 yards,” he says. You can be more aggressive, too. “If I’m 100 yards out and a gobbler is coming, I keep going to him. That bold movement seems to really fire toms up. But once you’re within 40 or 50 yards, you’d better get ready to shoot or he’ll be climbing right into your lap.” Footage of gobblers storming to within arm’s reach of McCarty’s decoy has fueled much of the buzz surrounding this tactic.

If you’re fanning, simply use the tail feathers to conceal the final movements of shouldering your shotgun. Often, you can slide the barrel through the feathers and take the shot. Otherwise, drop the fan when the bird is in full strut, and shoot when he cranes his neck for a better look.

A decoy makes shooting easier. You can stake it in the ground and then lean to one side to shoot prone, or ease up on a knee or onto your butt from behind the deke to shoulder your gun or draw a bow. Pluck a feather from the fan to make a shooting window. These shots always seem hurried, but you usually have more time than you think. If a bird gets edgy, give him a couple of contented clucks. And while he lingers for a second, deciding if he should stay or go, drop him.

Fan:
Lighter and easier to carry, a fan can’t hide you as well as a decoy, so you must plan your final approach very carefully. Don’t try crawling downhill with one; a gobbler will look right over the top of the fan and nail you.

Decoy:
The Mojo Scoot & Shoot has a handle for carrying and flared wings. It provides far more concealment than a fan alone. But it’s bulky and costs about $80, whereas a turkey fan is free. Still, if I know I’m hunting field birds, I make sure it’s in the truck.

“Never stalk a turkey” has always been hunter-safety bedrock. But most accidents occur in the woods, and fanning and reaping are strictly open-terrain tactics. I couldn’t find docu­mentation of a single accident involving either method. Neither could the National Wild Turkey Federation. McCarty, who has fanned or reaped hundreds of birds, has never had even a close call with either tactic.

Bottom line: All turkey hunting has an element of danger, including fanning and reaping. So be smart. Never do either in the woods. Make sure you can see your target bird and the surrounding terrain well beyond shotgun range in every direction. Never try either method during a spring rifle season (or in Pennsylvania or any other state where stalking is illegal). And don’t assume you’re safe because you’re on private land.