How to Kill Eastern Turkeys in the Timber

Hunting an Eastern gobbler in the hardwoods is a tactical chess match that demands your best calling and the perfect setup. 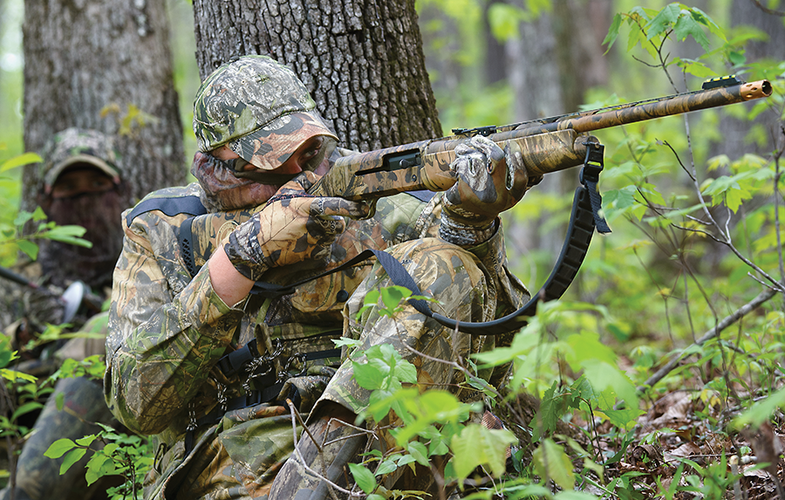 It’s a gamble, sneaking up here in the dark so close to the roost. Yesterday afternoon, after our tom quit gobbling, F&S deputy editor Colin Kearns and I found this sunken roadbed on a ridgetop in the old-growth hardwoods. It was laced with strut marks and flush with tender new greenery and insects. The turkey, we figured, had flown down and strutted right here after first light. Had ­Kearns and I known about this spot, we’d have killed him yesterday morning. Which is why we’ve wagered an extra hour of sleep and come back this morning for another chance at the bird.

We sit against two white oaks in the dark and wait on the first roaring gobble of the day, assuming he has to be roosted close. But when the dawn chorus begins, the tom gobbles on another ridge, 300 yards away. Kearns and I can stay put and hope he comes back, or hustle to a new spot. We hustle.

Get in the Zone 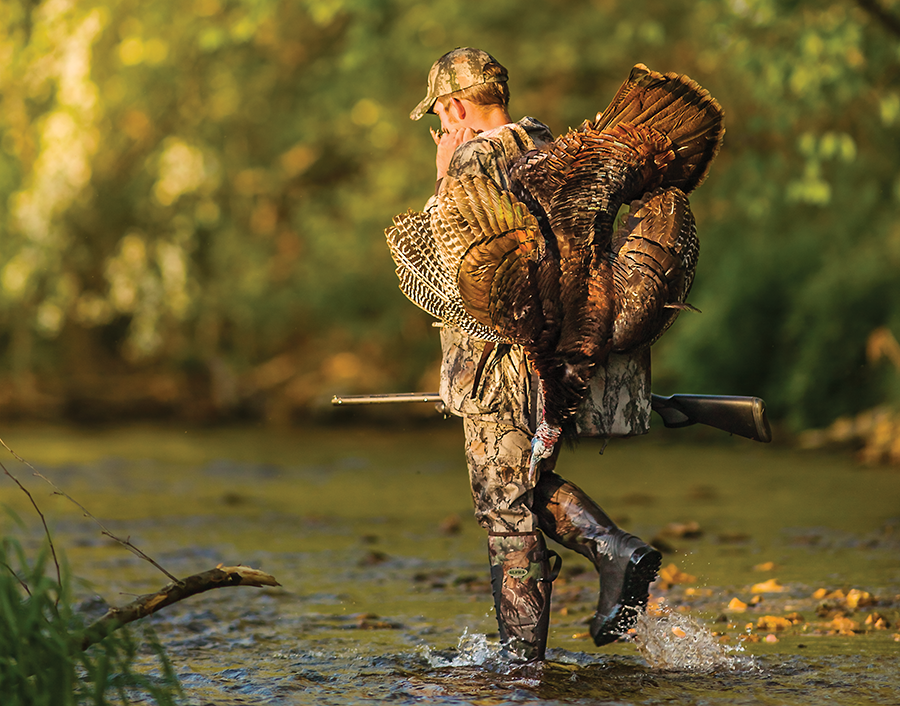 An Arkansas hunter crosses a creek with a hefty Eastern longbeard over his shoulder.

It’s easy to question turkey hunting’s difficult reputation after you’ve seen a tom beat the hell out of a plastic jake staked 10 yards from a blind in a wide open field. Challenging a turkey’s dominance with a decoy is the tactic of choice for many hunters, though, because it is a fast, effective way to kill a bird. I can’t find fault with that.

But the classic gobbler game—the one with chess-match strategy—still gets played in the timber against big, thundering Eastern toms. A smart hunter plots his moves two or three in advance: Shifting to the next ridge may spook him—but it might bring him right to you, gobbling the whole way. He’ll sound like a man walking his final steps if the leaves are dry, and if you’re set up correctly, he’ll be in range when you see him for the first time.

Consistently killing turkeys in the timber requires good calling, preferably with a mouth call, which is more versatile than a box or slate. And in a tight setting like this, your hands need to be on your gun. More so than calling, however, it’s the setup that will make or break your shot. Sure, you’ll call up the occasional kamikaze 2-year-old from a half mile, but most timber toms seem to have a zone—a distance from which they can’t help but respond—and if you can slip to within that zone before setting up, your odds of killing that turkey double. Maybe even triple.
I’m happy if I can get within 100 yards of a turkey, but 75 yards is an in-zone guarantee. You’ll spook some turkeys sneaking that close, but the payoff is so high, I’ll take that chance over and again. To get in the zone during daylight, you have to use the terrain to your advantage. Even dense foliage won’t hide you from a turkey that’s 50 yards away, but they can’t see through hills. If keeping a hill between you and the turkey requires circling for a half mile and ultimately crawling the last few steps to the perfect tree, do it. Of course, knowing where a turkey is roosted is even better. Get there an hour before daylight, and you can sneak in close enough to see the gobbler’s limb shaking as he wakes up—and close enough to be in gun range when he flies down.

Kearns and I had hoped for a bird in range at fly-down, but our problem is common enough: Eastern turkeys don’t always roost in the same tree. So we sneak to the base of our ridge, cross a small beanfield, and work our way onto the next ridge, where we now know our turkey spent the night. He’s gobbling a fair bit, but to our delight, two more toms are roosted near him, and they haven’t shut up all morning. We end up sitting against a walnut tree with a subtle rise 25 yards ahead between the turkeys and us. Any birds that we call in will have to break over that rise to find the source of our calls, and by the time they do that, they’ll be in gun range.

Overcalling can keep a roosted tom on the limb, but these birds have hit the ground by the time we set up, so I don’t hold back. A lonesome hen is pushy, and I want to sound the part. Our origi­nal turkey gobbles some but nothing compared with the other two. They are so taken that they can’t resist steering toward us. I pour on the yelps and cutts, and when their gobbling becomes frantic and close, I antagonize them with my best trick of all: silent indifference. Soon they’re drumming just out of sight. Their wing tips in the leaves sound like dragging rakes. Kearns and I have our guns on our knees. “Here they come,” I whisper. A golden fan unfurls just over the rise, then two Easterns step into view.

Kearns and I each carry a tom back to the truck. It’s a perfect spring morning. You could even call it classic.

When I’m hunting turkeys in the hardwoods, I trade my vest for a small camo fanny pack with some extra shotgun shells, a bottle of water, a granola bar, face paint, and a few mouth calls. Setting up on a turkey that is 75 yards away requires stealth and sometimes speed, and a loaded vest only adds weight and bulk. I use a V-cut triple-reed call 90 percent of the time because its raspy sound suits my aggressive calling style (my favorites are a Zink Calls Lucky Lady and a David Halloran Total Knock Out). But a double-reed, like a Zink Z-Yelper, is great for tree yelps and other soft sounds.