Last October, Dave Stornetta, 59, was hunting in California when he found himself in unfamiliar wilderness. He was missing for six nights. 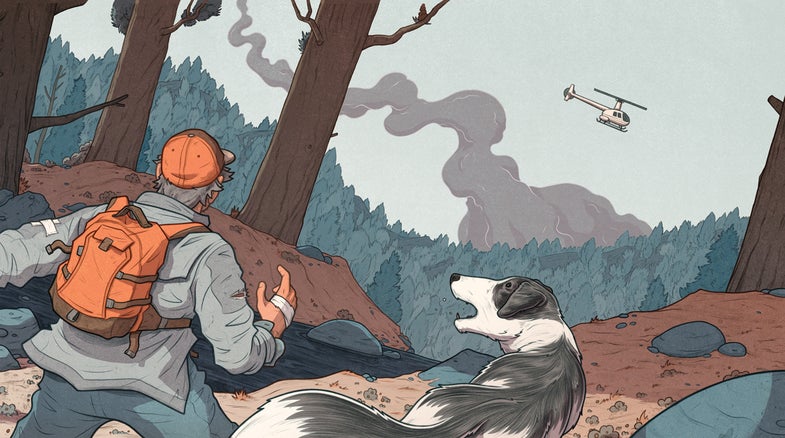 Day One: Wednesday
My son Kyle and I were hunting the Yolla Bolly–Middle Eel Wilderness. Our plan was to split up in the morning, then meet at base camp for lunch. But things didn’t go that way.

I saw a nice buck and started stalking him, but every time I prepared for a shot, he moved. I played cat-and-mouse with that deer for hours. He took me through a canyon and over a ridge I’d never seen before. I remember thinking, I’m in unfamiliar territory. When I finally broke off the deer, I couldn’t locate the canyons and ridges I’d crossed earlier. To make matters worse, a storm had moved in and fog masked the landscape. I had no map, no GPS, no cellphone. I did have a lighter, a few pieces of jerky, binoculars, and my rifle and 17 cartridges. I considered shooting three shots to signal for help, but I didn’t want my son looking for me in the dark.

I built a small fire and dug a bed under some fallen trees. My deaf McNab shepherd, Maggie, who I bring on hunts, curled up next to me. We were both cold and wet, but we made the best of it. I figured it would just be for one night.

Day Two: Thursday
The next morning it was still raining and foggy. I climbed to a high point and fired three shots to signal for help. I waited a moment, and fired three more. Nobody responded. I continued hiking, believing I’d eventually find a road or something. On top of another high point, I fired three more shots. When I didn’t hear any signal back, I thought, I’m getting low on ammo. That’s enough for today. I was calm and contemplated every move I made. I stayed positive—even though as the day wore on I knew Maggie and I were going to spend another cold night in the woods.

Day Three: Friday
I heard helicopters in the morning. I tried moving toward them, but the sound echoed everywhere—until it eventually faded. Still, just knowing they were searching for me was a huge boost. Maybe tomorrow, I hoped.

That night, I couldn’t stop thinking about my family. This ordeal had to be harder on them than it was on me. I knew I was alive. I knew I could find a way out. But from their perspective, I had simply disappeared. I fought tears as I forced myself to rein in those thoughts. I couldn’t afford to imagine worst-case scenarios.

Day Four: Saturday
The choppers were back. Their unmistakable drumming gave me another boost. I climbed a ridge and saw one about 3 miles away. I torched a small, dead pine for a signal, but the chopper disappeared. I moved in its general direction, but the next time I heard it, it was far away.

I rested for a long while. Surprisingly, I wasn’t hungry. I considered shooting an animal for meat but talked myself out of it. I couldn’t eat it all, and the smell would attract bears—of which there were plenty. But knowing I needed nutrition, I ate some white grubs I’d found. They weren’t bad.
That night, the wind ripped through the woods. I tried sleeping among some burned-out timber, but the gusts were snapping rotten trees all around me. Two or three fell close enough to pepper splinters on my face. It was terrifying.

Day Five: Sunday
After the wind, it rained hard, and hiking was the only thing that kept me warm. The only shelter was on the side of a mountain, under a small rock outcropping. That night I dreamed that I phoned my son and said, “Tell those choppers to look toward the north!”

Day Six: Monday
I stood in this one spot waiting for the choppers, believing last night’s dream was real. Nearly an hour passed before I came to my senses.

It took all my energy to climb 10 steps before I needed rest, so Maggie and I made our last stand near an open creek bed. I spelled S.O.S. with some rocks, ignited a logjam for a signal fire, and hung my clothes in the trees to dry. I drank water from the creek, ate lizards I captured and roasted, and sat around camp naked in the warm sun for the day. I fired several shots from my rifle—partly as a call for help, partly for celebration. It was my 59th birthday.

Day Seven: Tuesday
Another helicopter. I hiked toward the sound, but after two hours, my tank hit empty. I fired my last round and lay down. When I woke up, I heard the chopper over a ridge to my south. Halfway up the slope, I heard the drumming just through the trees—and there it was, hovering over the canyon beneath me. The pilot must have seen the smoke from the logjam fire.

By the time I got back to the creek, the chopper was turning to leave. I shouted and waved my arms wildly. I was sure they hadn’t seen me. But then the chopper tipped on its side, spun on a dime, and came back for us. I crouched and hugged Maggie tight.

We were in the air only a few minutes before we landed. I looked out, and there were at least 100 people on the landing site, including friends I hadn’t seen in years. As I stepped out of the helicopter, they sang happy birthday. —As told to B.R. _ _Photo: Stornetta, center, stands with the rescue crew before they leave.

—
Epilogue
Stornetta later learned that because of his age and smoking habit, and with no evidence of his whereabouts, authorities treated the search as a body-recovery effort; not a search-and-rescue mission. Stornetta’s wife, Kelly, hired two private pilots who found him on their first day in the air. He didn’t require any medical attention, though he did experience some sweaty, restless nights at home in the weeks after his ordeal. Stornetta plans to return to the wilderness next fall for his first archery hunt but says he’ll bring along a GPS this time.