Illustration by Asaf Hanuka Crossbows have grown so much in popularity that you might believe people have learned to quit... 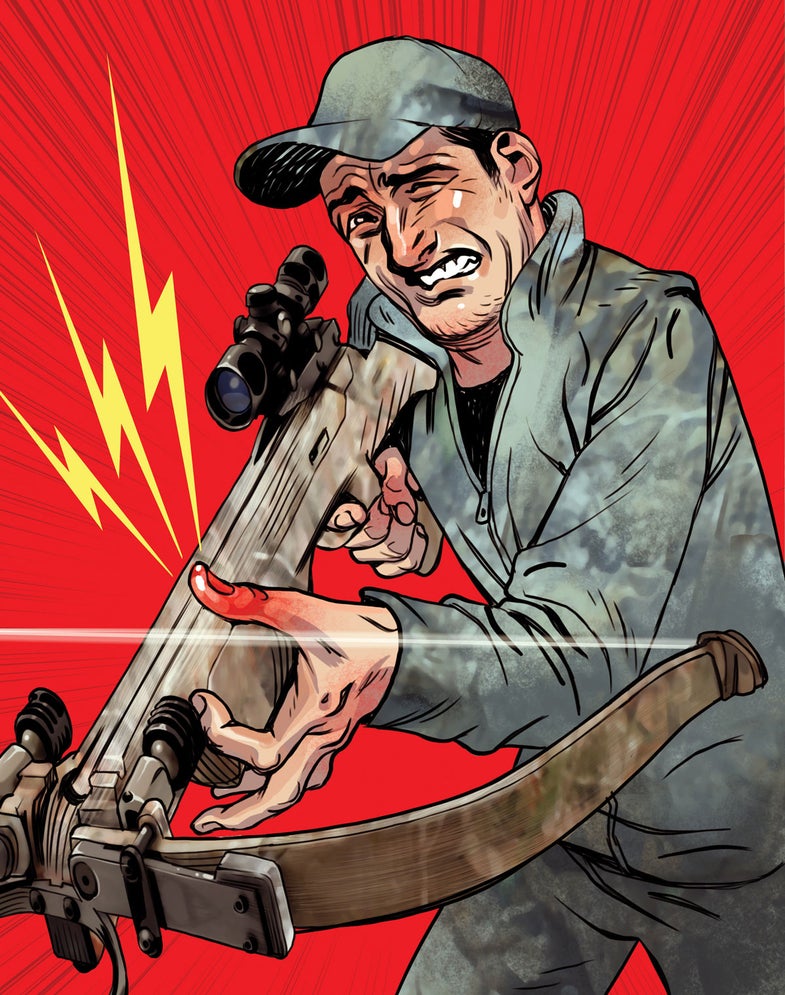 Crossbows have grown so much in popularity that you might believe people have learned to quit chopping their fingers off with them. Yet, every deer season, I’ll see a photo or two of some mangled digit, courtesy of a crossbow mistake, in my Facebook news feed. Crossbow safety rules are simple. Follow them, and your fingers will last for years to come.

[1] Hands Off the Rail
The most common crossbow-related injuries involve people getting their fingers between the cocked string and rail. Even veteran compound-bow and rifle shooters can make this mistake. Most modern crossbows have guards on the fore-end that make it difficult to put your hand in the wrong spot when you’re shooting offhand. Problems arise when you’re shooting from a rest; you don’t need your off hand, so it’s prone to wandering places it shouldn’t. The solution is simple. Keep your off hand on that fore-end or, if shooting from a rest, tucked into your lap.

[2] Beware of Bolts
A carbon bolt with a slight crack can explode when fired and leave shards of graphite in your cheek. You don’t want that. Check to ensure that your bolts are in good shape, and that they’re heavy enough for the bow you’re shooting. Crossbow bolts are decidedly not one size fits all.

[3] Watch Your Backdrop
I’ve killed and seen killed quite a few critters with a crossbow. I’ve only seen the bolts recovered a handful of times. Crossbows shoot hard. Be sure you have an adequate backstop when practicing, same as you would when shooting a rifle.

[4] Don’t Dry-Fire
A dry-fired crossbow can be disastrous. An anti-dry-fire device will not allow the bow to be fired unless a bolt is in place, and all good crossbows have this critical piece of safety equipment. Unfortunately, there are some bad crossbows that don’t have one. Avoid them at all costs.

[5] When in Doubt, Shoot It Out
Some crossbows can be de-cocked with the aid of a rope-cocking device. It’s not particularly hard to do, but the penalty for doing it wrong is a dry-fired bow hovering directly over your foot. The safer way to de-cock a crossbow is to keep a target or discharge bolt in the truck and shoot it at the end of the day.

[6] Don’t Be an Idiot
I once saw an outdoor TV host carrying a cocked crossbow by the rail—his entire hand through the string—on his show. I assume that he also carries loaded handguns by the muzzle. Don’t be an idiot. The rule speaks for itself.