Frenzy in the Fall: Tactics to Add Excitement to Your Turkey Hunts All Season Long

Is your fall hunting feeling a little quiet? Get out of your treestand and go scatter a flock of turkeys. You’ll have all the commotion, excitement, and flat-out fun you can handle. 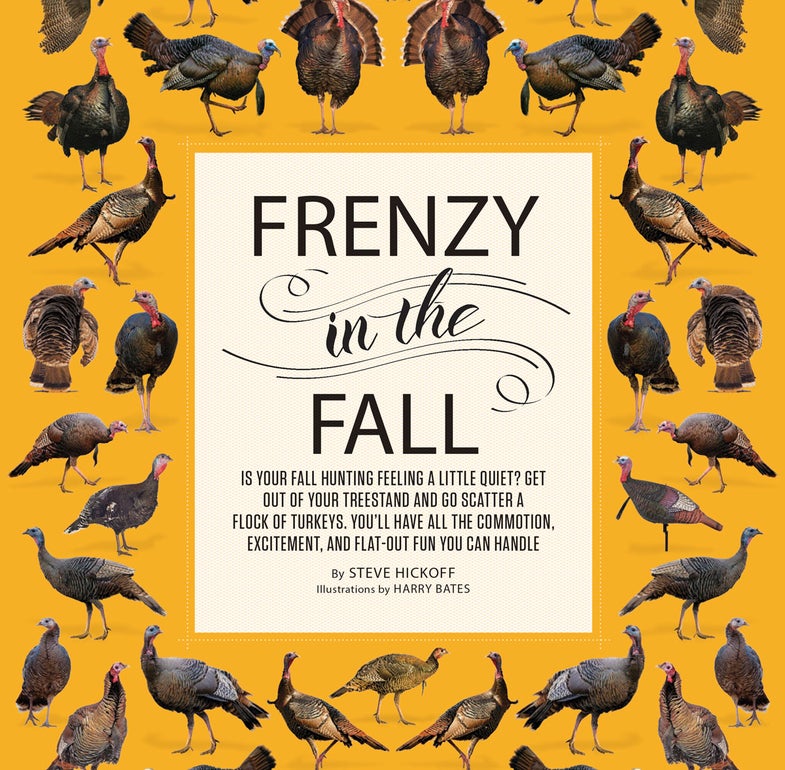 Luna barks just before a flock of gobblers explodes through the treetops. Jackpot. I conceal my dog in a camouflage bag and settle in for a long wait. An hour passes, and I doze a bit—until Luna lifts her head, cued in to the yawk-yawk-yawk of a gobbler yelping. I call back, and a gobble roars out from behind me. Soon we hear footsteps in the leaves. A turkey appears, pops into half strut, and gobbles again. After the shot, Luna rushes out for a mouthful of feathers.

Action like this is why I never go deer hunting.

You can hunt fall turkeys somewhere from September to January. But as in spring, seasonal changes in food sources and turkey behavior demand different hunting strategies. Here are some of the best.

Early archery seasons for deer frequently overlap with bow-only dates for turkeys. You may get a bonus bird from a treestand—but if you really want to shoot a turkey, a targeted ground-blind ambush is the way to go.

You’ll mostly be hunting brood hens with young-of-the-year poults right now, and these flocks are highly predictable around their favorite foods. Before mast falls, those foods usually include bugs, green food plots, chufa patches, and grains, like milo and corn. Since the birds key on fields, they’re fairly easy to locate and pattern. It’s not uncommon to catch a flock cruising through a hay meadow or loafing in a shady pasture corner at midday, but you can expect them to feed like clockwork early in the morning and late in the evening.

You have two good hunting options: Intercept them (a) along travel lanes or (b) right where they feed. You’re thinking like a deer hunter here. Find access points including farm roads, bottlenecks, field corners, edge-cover openings, and game trails leading to breaks in fencing. If turkeys are roosting close to a field where they’re feeding, they may pitch out of trees and right down to it. If the food source is in a wide open area, flocks will typically use the field’s highest point to walk into it.

A ground blind is the best way to get a shot once you’ve patterned a flock of turkeys, as it allows you to draw a bow unseen. Stake a pop-up in range of the X—where turkeys feed and want to be. Miss the X by just a little? Be patient. Let the birds go to roost and adjust accordingly for the next day.

Scattered fall turkeys will try to regroup every time. The reassembly can be a chaotic scene, with panicked turkeys calling in every direction. If you’re sitting in the middle of that with a shotgun and can run a turkey call, your odds of killing a bird are outstanding. Right now—when turkeys are in the woods in search of hard mast—is the time to try it.

First you have to scatter a flock, and one of the best ways to do that is by busting them off the roost. Slip right up underneath them at daybreak and start flushing them out of the trees. Make plenty of racket; get singles to fly in every direction. You can also do this in the evening so that the turkeys spend all night scattered; the response at daybreak can be off the charts. During the day, you can scatter flocks by slipping to within 100 yards and rushing into them.

After the break, set up within gun range of the scatter site. Wait until turkeys call on their own, and echo their sounds when they do. If you hear gobbler yelps, yelp right back. If you hear kee kee runs, make them, too. Often, scattered young birds try to get together fast, in under an hour. Adult gobbler gangs often won’t respond for hours, but the wait is worth it. I’ve seen flocks of scattered toms and super jakes—11⁄2-year-old gobblers—go into gobbling, strutting frenzies as they regrouped. It’s as good as anything in April.

Entire turkey populations may shift home ranges in winter and concentrate near top food sources, such as picked cropfields, cow pastures, feedlots, and hardwood mast. It’s a great time to hunt. Pecking order is a year-round factor with turkeys, but as the new year arrives, gobbler groups feel spring’s pull and begin working overtime to establish dominance. Use that to your advantage by slipping tight to a roost and imitating a post-fly-down rumble well before dawn.

Ask Santa for a new spread of turkey decoys—including a jake or strutter fake—and stake the entire thing out within easy range. Match it with heavy calling. Diversity and intensity is the key because you’re trying to imitate an entire flock. You won’t be able to match the sounds of 100 turkeys by yourself, but you may be convincing enough to watch a dominant gobbler break loose from the flock and strut right into your setup. Shoot him before he beats up your Christmas present.

Legal in nearly 30 states, turkey dogs find and scatter fall flocks. A good dog will cast ahead, check back, and bark on the flush to identify the scatter location. You then set up and try to call those birds back. English setters and pointers (especially ones that won’t hold point), Boykin and Brittany spaniels, Labrador retrievers, and various mixed breeds including droppers can all be trained for turkey hunting.

Over the past several decades, my setters have shown different hunting styles. Jenny, a sprinter, busted flocks best in small woodlots. Midge ran big and wide, nose to the ground, barking on the scatter. Radar, an upland stylist, would hang back on scented flocks until I verbally released him to find and flush them. My current dog, Luna, is more like Midge. She runs big, barks at scared singles, and eagerly slips into her camouflage bag so we can hopefully call a bird back in.

Love turkey hunting and gun dogs? This great tradition might be for you.—S.H.