Photograph Aaron Hitchen/The Raw Spirit When it comes to duck hunting, there’s nothing quite like the dawn patrol. Sunrise is... 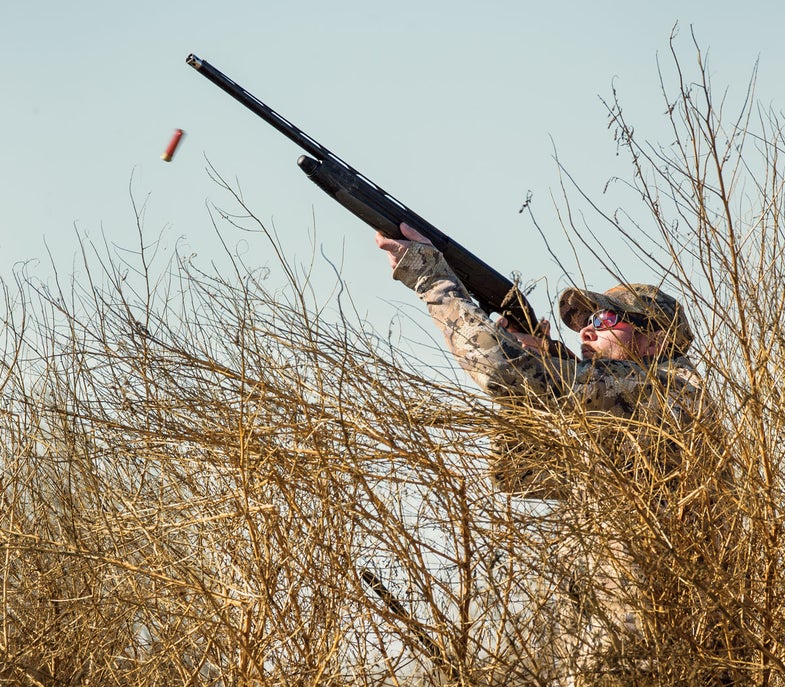 When it comes to duck hunting, there’s nothing quite like the dawn patrol. Sunrise is just a promise on the eastern horizon as you sit quietly and listen to the sounds of the marsh coming to life—hoping that one of them will be the whistle of wings when shooting hours begin. But sometimes first light isn’t the best time to put puddle ducks on the strap, particularly on hard-hunted public wetlands. Often, hunters on foot or in boats push birds out of the area before daylight. Ducks aren’t dumb and will respond to hunting pressure by moving up their early-morning departure from the roost in response to this disturbance.

Here’s how you can take advantage of this late shift and get a crack at those banker’s-hours puddlers that many waterfowl hunters never even see.

Scout the Clock
It’s essential that you know when the flights take place. In Iowa, midmorning activity generally picks up around 9 a.m.; when I hunted in Washington state, the bell rang at 10. Regardless of geographic location, scouting is the key. Bring binoculars and a watch, find a good vantage point, watch carefully, and make notes: What time were the birds flying? From which direction? Did they circle or drop straight down?

Find the Destination
Midmorning ducks don’t dawdle. They know where they’re going, and they set down quickly. Once you’ve found that area, research it. Search mapping sites online to get an initial mile-high look at the honey hole. Then the ground work begins. Private land means getting permission to do hands-on reconnaissance. Public land, unless you’re familiar with the property, translates into additional map work before putting boots to the ground.

Arrive Late, but Early
Now that you’ve found where the birds are going, you can sleep in—but it’s best to arrive an hour or so before the birds typically begin their return flights. Factor in travel on foot and/or by boat, and give yourself plenty of time to get your decoy spread, your blind, and yourself situated without hurrying.

Flush Them Out
Birds already there? It’s to your benefit to bite the bullet rather than shoot. Walk up, flush them out, and let them leave by their own accord. Then set your spread quickly and get under cover. It’s no guarantee they’ll return, but which is better: one or maybe two birds for the day on the rise, or a full-boat six or seven in ones and twos as they come back? It’s certainly your call.

Set a Small Spread
My go-to rig for this style of hunting consists of 18 Texas-rigged mixed puddlers—mallards, pintails, wigeon, shovelers, and teal—arranged in a loose circle, with a Rig ‘Em Right jerk cord in the center. On heavily pressured public lands, I’ll throw 12 coots—yes, coots—with a pod of mallards and wigeon to one side, also with the jerk cord. Puddlers are comfortable around coots and see few all-coot spreads. I’ll leave the spinning-wing decoy at home to give the ducks something a little bit different from every other rig out there.