Wood Ducks: Easy on the Eyes, Challenging on the Wing 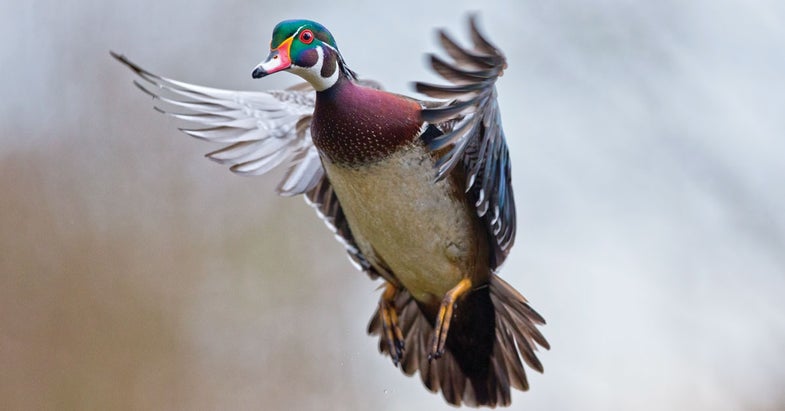 Going by many names—woodie, summer duck, squealer, Carolina duck—the wood duck is beauty defined. So handsome is the species, ornithologists bestowed the scientific name Aix sponsa, which refers to betrothal or wedding dress. Though most abundant in the Mississippi Flyway, wood ducks can be found in varying numbers throughout all four migration corridors. Wooded wetlands with ample overhead cover are the chosen habitat for this secretive breed, but good populations can be found in cattail marshes, flooded cornfields, slow meandering streams, and hidden backwaters. Here’s a quick guide to hunting them.

The Spread
Wood ducks are fickle when it comes to decoys. Some days, six to 12 good-looking fakes loosely arranged on a hidden pothole among the cattails or in a pocket in the buckbrush can be effective, with the woodies working almost like mallards—minus the suspenseful circling, for wood ducks, once committed, do so in high gear and without hesitation. On other days, live ducks couldn’t stop a passing flock. What does work, experienced hunters agree, are spinning-wing decoys like Mojo’s Screamin’ Woody. Love them or hate them, spinners, where allowed, are deadly on wood ducks, grabbing their attention at a distance and helping focus them visually on the small spread of decoys.

The Calling
Calling wood ducks is like decoying wood ducks—sometimes it works, more often it doesn’t. Woodies make a variety of calls—peeps, whistles, and an odd rising whine that phonetically might look like peet…oooooOOOOOO. Most of these vocalizations are made by birds sitting on the water, and because many wood duck haunts are thick places, a flying woodie usually has no idea where the sitting woodies are.

It’s easier and more effective, I’ve learned, to peep, whistle, or whine to birds already landed in order to call them to your blind. When they get within gun range, practice the art of jump shooting.

The Shot
Jump shooting is as traditional a waterfowling method as there is, but that doesn’t mean it’s a gimme. Give birds time to swim into range, and stand, where possible, with your hands positioned on fore-end and pistol grip, safety on. At the flush, smoothly mount, remembering to swing through the birds. Concentrate on a single first before attempting a double. Often the birds flush on their own accord, but occasionally they require a shouted “Hey duck!” to prompt them into flight.