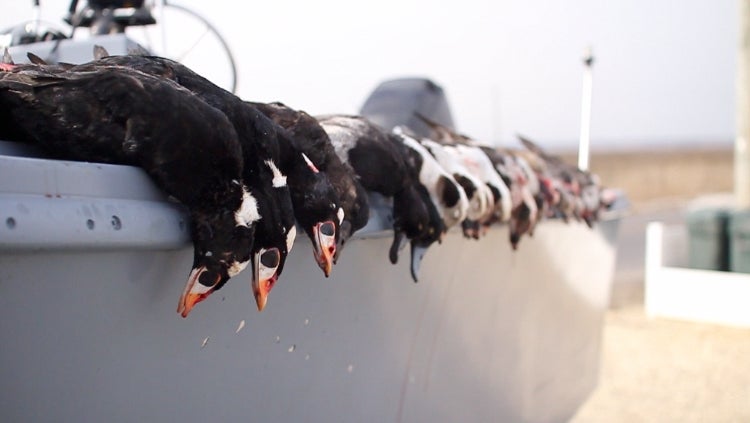 At least 20 ducks materialize from under the rising sun, just off the New Jersey Coast. They knot up, then spread out low over the water. We hear the drakes’ unmistakable calls—long-tailed ducks. Theodore Roosevelt nicknamed them “sou sou southerlies” because of that sound. Many hunters still just call them oldsquaw.

Eric Hauck hollers to shoot, and we let it rip. Three bird splash into the salt, and more ducks—scoters and bluebills—are bearing down on the spread before we can reload.

“How’d you like that?” asks Kevin Addy, an Avery pro staffer, as I climb out of the layout into his tender boat. It’s incredible. We’re limited out by lunchtime.

A good sea duck hunter is part waterfowler, part big-water boat captain. This is a gear-intensive sport that’s downright dangerous compared to a mallard shoot in a cornfield. But a sea duck hunt done right is fast and furious. Eric Hauck and Kevin Addy have been hunting these big-water birds for a decade, and a weekend spent with them was like a master’s-level sea duck school. Here’s what I learned.

You need a bigger boat

A large, reliable tender boat is your lifeline offshore. It took Addy eight months to rehab his 1978 Sea Ox 2300 into something useable, but it’s a seaworthy vessel now. “The floor was rotten. It needed a new transom. The motor didn’t run. The stringers were rotted—but the fiberglass hull was structurally sound,” he said. “The hull was what I was really after.”

With the help of Ken Guan, a master mechanic friend, all the wood was replaced or re-glassed. They built a higher transom, and installed a welded motor mount. The new steering console is small, to maximize deck space. There’s probably $6,000 to $7,000 in the whole rig. It’s a lot of money, but nothing compared to the $30,000 sticker on a new 23-foot tender boat.

Layout for the layouts

Addy has six layout boats, but he usually hunts from his Waterfowl Works Legacy 2 Man boat, which weighs nearly 200 pounds. Launching it in rough seas is no small challenge, so Addy devised a system of bow rollers from an old trailer, mounted to the bow of his Sea Ox, to make it easy. A custom bunk board runs across the beam of the tender and locks the layout boat in place when it’s not deployed.

After the layout is launched and anchored fore and aft, Addy checks both the wind and tide. As with any duck setup, he wants birds decoying into the wind, but a strong current can complicate things.

He typically uses seven dozen decoys rigged on longlines: three lines of scoters, two lines of long-tails, a line of bluebills, a mixed line of buffleheads and assorted divers, plus some single decoys and a floating wing-spinner decoy (like a Mojo Bluebill). “I’d rather set a smaller spread that I can pick up and move quickly if the hunting is slow than grind it out in a bad spot,” Addy says.

The decoys are secured with braided decoy cord drops to a quarter-inch sinking main line. He puts six decoys on most lines, then attaches a D-ring to the end. He secures the lines with a grapple hook or an old sash window weight. He does extend one longer line downwind of the layout, and many ducks will work right up that into the main body of the spread. Addy breaks up the otherwise straight rows of decoys with a few single drops, and the result is a realistic rendition of a raft of sea ducks on open water.

With the rig set, the shooters then simply step into the layout boat, hunker down, and keep still. The boat itself has a clear plastic spray shield to keep cold saltwater off the hunters while maintaining the low profile. “People say sea ducks are dumb, and sometimes they are,” Addy says, “but not when they’ve been shot at all season.”

Sea duck hunting can be dangerous. “People die every duck season on the big water,” Addy says. “Staying safe is the most important part.”

A forward-mounted box in the tender boat has life jackets, a fire extinguisher, and flares. Addy’s Lowrance unit is hardwired to the VHF marine radio, and there’s a panic button that will mayday the Coast Guard with coordinates on a single push. The hunters in the layouts have two-way radios as well to call the tender if needed—usually for picking up downed ducks or begging for more shells.

Sea ducks need a little more help in the kitchen than a pintail or grain-fed mallard.
They’re perfectly edible in a gumbo or curry, but they make excellent jerky. Breast them out, brine the fillets, and marinate them before slicing them thin and sticking them on the smoker or dehydrator. I like them spicy, so I add plenty of Sriracha to the marinade. The key to sea duck cooking is removing all the fat—which tastes fishy—from the breast meat.