In Puerto Rico, where invasive iguanas are causing millions in damage, some hunters have declared open season on the reptiles. 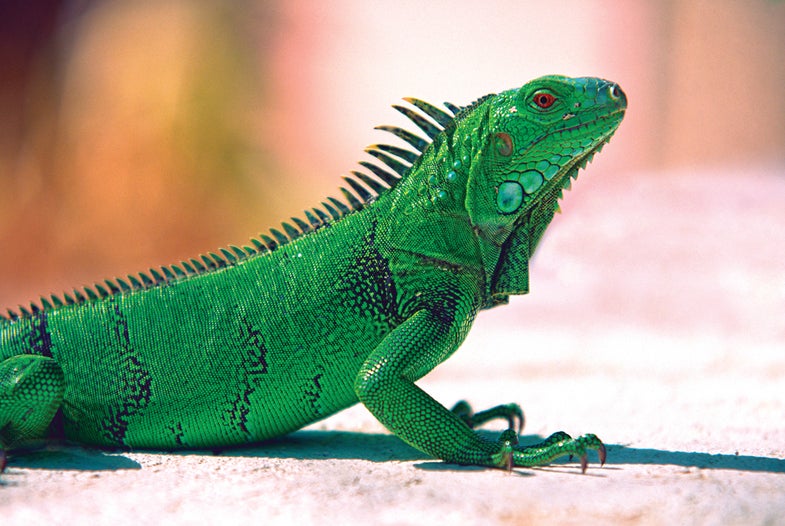 Out the corner of my eye, I catch the flick of a tail. There it is again. I move the scope and strain to find a critter in the tangle of branches and leaves. I follow a jagged line from the tail up to the back to the head. I make out an eye and, just behind it, a small dark spot, which serves as an aiming point leading directly to the brain.

It’s still early in the day, but already everyone has retreated into the shade. We don’t get much relief, as the canopy holds in the heat and humidity, but at least the sun isn’t beating on our necks. I hear my friends nearby, chattering in a mix of English and broken Spanish as they point out targets in the trees. The only other sounds are strange birdcalls and the clattering of claws on the African tulip and ceiba trees.

I wipe sweat from my eyes and refocus on the dark spot. Before my quarry can scamper to the other side of the tree, I quarter the earhole with the crosshairs and pull the trigger. The .35-caliber lead pellet hits with an audible thump. A second later, the 6-foot-long iguana falls to the jungle floor.

There’s something primal about crouching in the jungle as reptiles—with their armored skin and flickering tongues—crawl overhead. Iguanas eat mostly plants and aren’t considered aggressive, but that doesn’t stop your heart from quickening when one drops to the ground and thrashes through the dense and tangled cover. It’s an adventure almost unheard of in the continental U.S., but one that’s increasingly common, and necessary, in Puerto Rico.

With no accurate way to take a lizard census, the estimated number of iguanas inhabiting the island varies widely—from 4 million to 14 million. Officials aren’t even sure when iguanas first arrived here, as released pets or escapees from the holds of container ships. The only sure thing is this: With no natural predators, the iguana population has exploded in the last decade, and they’ve caused millions of dollars in damage.

Iguanas burrow to nest, digging holes under sidewalks, roads, and runways, compromising the territory’s very infrastructure. Voracious omnivores, they have taken a liking to the island’s tropical fruits. Iguanas can wipe out a melon patch in a single night or eat their way through a papaya orchard in just a few days. They are a Puerto Rican farmer’s worst nightmare, referred to locally as la plaga verde—the green plague.

The government here is at a loss for how to control them, but locals have taken matters into their own hands. Unofficial groups of hunters with names like Iguaneros de Aguada and Iguaneros del Este have come together to help farmers save their crops by shooting the invasive pests en masse. One of these groups is led by local gun-shop owner Charlie Salazar and his employee Alex Roman, who agreed to set us up on a produce farm near the city of Ponce for a two-day iguana hunt. Before the trip, I wasn’t sure if I wanted to kill iguanas. But that was before I learned about the damage they cause, and how challenging they can be to hunt. And I’d be lying if I said I wasn’t curious about the flavor of grilled iguana.

My first iguana sighting comes just outside the ranch gates, where a sprawling bare-branched ceiba tree stands in a small, sandy paddock. Iguanas scramble to its upper reaches as we pass by. I count 40 lizards before I lose track. Dense jungle surrounds the farm’s fruit-laden fields. There, the iguanas spend the day sleeping off a fruit-fueled bender out of the hot sun.

Our group starts at a cliff edge overlooking the jungle, an unseen river flowing below us. The vantage point puts us even with the canopy, and the shots come quick and close. Lizards are less than 10 yards from the muzzles of our guns, though we stretch our shots farther out as the iguanas retreat from the pressure. The nature of the hunt, and Puerto Rico’s strict gun laws, makes this a game for air rifles. We swap precharged pneumatic tubes often and keep rotary clips filled with hollow-point pellets.

Though the shooting is hot, it is not easy. Like a scaled squirrel, an iguana is adept at putting the trunk between it and you. The animal’s coloring is natural camouflage as well, and even in full view a big iguana can look just like a branch of the tree. After you pick off the easy targets, it can take several minutes of hard scanning before you find another. Usually the tail gives one away, but sometimes a long row of spikes is silhouetted against the sky just right. Then it’s simply a matter of getting into position without spooking the reptile, and finding a clear shot to the head.

The hunt ends early. Targets aren’t lacking, but we gringos can’t handle the heat. Cold cervezas await us. Like hunters at any camp, we swap stories about the day’s hunt—of lizards falling and of the one trophy, bright orange and white, that survived our pneumatic barrage. Soon, a platter of stubby legs and thick tails, charred with grill marks, is placed before us, accompanied by a bowl of Puerto Rican arroz mamposteao. All of us sample the meat. The texture and flavor falls closer to gator than the chicken-of-the-trees I’d been expecting. The platter is passed around again, and while others hesitate, I reach for seconds.