These 11 outdoors women—pro anglers, big-game guides, badass hunters, deadeyes, and divas—are inspiring other females to take to the outdoors … Continued 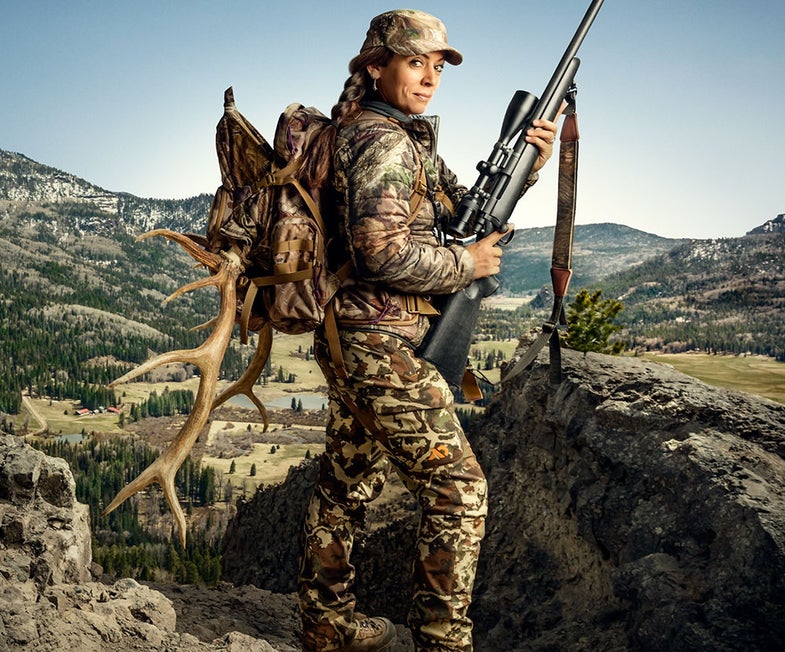 Mia Anstine is one of 11 featured women who are changing what it means to be outdoorswomen. Chris Crisman
SHARE

These 11 outdoors women—pro anglers, big-game guides, badass hunters, deadeyes, and divas—are inspiring other females to take to the outdoors in record numbers

In 1951 Joan Wulff won the National Fisherman’s Distance Casting event against an all-male field by casting a fly 131 feet. Brenda Valentine was shooting 10-rings with a compound bow in the ’80s. It was more than 25 years ago that Christine Thomas founded Becoming an Outdoors-Woman, and Melissa Bachman launched Deadly Passion Productions back in 2010. In short, highly skilled women excelling at hunting and fishing are nothing new.

But let’s face it: Historically, women have been underrepresented in the outdoor sports, and too often marginalized. That’s all changing. Thanks to the aforementioned pioneers and others like them, the number of outdoorswomen is now exploding—to the point that increased female participation is the biggest trend in our sports today. Just as important, women are carving their own space in the outdoors.

You already know some of the most prominent female faces, but a legion of women are making a difference on the grassroots level. Here are 11 hardcore hunters, anglers, and shooters, who by example and by outreach are making the outdoors a place where more women want to be.

Big-game guide and co-owner of Wolf Creek Outfitters Inc., Anstine writes a blog called Mia & the Little Gal, about raising her daughter in the outdoors.

• When my daughter, Lea, was 4, I’d take her grouse hunting, and my mom would come along as a babysitter. We’d bring the birds home for dinner. Later that year, Lea caught and kept a rainbow trout. At dinner she said, “Mama, you got a bird, and I got a fish!” Right then, I knew she felt a part of it all.

• When I met my husband, Hank, a big-game outfitter, I became a guide and we immersed Lea in the outdoors.

• If you have a little girl, try taking her on a hike and making it into an adventure. Lea used to be afraid of bugs and getting dirty, so we started by just looking for bear scratches and collecting aspen leaves. I’ve loved watching her grow into a phenomenal outdoorswoman—and sharing that with others.

• There’s a lot of pressure with kids and social media, especially to tag an animal and post a photo or video. We’ve taught her that this isn’t what hunting is about, and she speaks up about it on her own social-media outlets. It’s great to see other kids following her lead.

• Years ago, on an elk hunt, Lea was so tired she didn’t want to keep going. I kept singing to her as we hiked, and she eventually got her elk. Last year in New Zealand I hit that wall, with leg cramps after 18 days of hunting. She said, “Come on, Mom. You can do it!” We’ve come full circle, and it makes me so proud. —As told to Barbara Baird

The Woman of Steel: Kate Taylor

• I remember fishing with my dad from the edge of a dock: total Norman Rockwell painting. I got a bite, and my first fish was a big bass. I was getting tired and said, “Dad, please help me.” He said, “That’s your fish, you’re bringing it in.”

• When I was in my mid 20s, a couple showed me pictures of these huge rainbow trout in Alaska, and of their guide, Nanci Morris Lyon. She’s a legend—the first female sportfishing guide in Bristol Bay. The couple said, “You should go guide for her!” I remember laughing. Four years later, Nanci gave me a job.

• I wanted to support the Save Bristol Bay campaign and figured we could raise $1,000 in 30 days through our clients. Nanci said, “We’re going to raise $5,000.” We exceeded that in a little more than two weeks, just by talking to our guests about the Pebble Mine. That was a real eye-opener. It’s grassroots efforts that lead to milestones like the EPA assessment and recent court rulings in favor of protecting Bristol Bay.

• My favorite thing right now is fishing beautiful flies. They take me a long time to tie, but I get immense satisfaction from catching a steelhead on one.

• Forget about how your cast looks or what Johnny Spey Caster is doing downstream. Completely focus on the soft water you can reach, no matter how short a cast it is. That’s where the fish are. Once your fly hits the water, envision where it is and what it looks like to the fish.

• It’s amazing how camouflaged fish are in a river. Or in saltwater, where maybe you’re just looking at the shadow. So it’s rare to really get to see a fish, to touch it and take in all the colors and inherent beauty. It’s an adrenaline rush.

• A river changes so much from day to day, even hour to hour, and the fish react to those changes. You need to be there to understand these intricacies. You can speed up your learning curve by surrounding yourself with good anglers, but nothing replaces time on the water.—As told to Erin Block

• I didn’t start hunting until 2008, but it was like a switch flipped in me, and I’ve been obsessed ever since. In Africa my PH said I was the first woman to complete a Spiral Slam in one trip. My biggest whitetail grosses 180.

• We can get over 300,000 trail-cam pictures of deer a week. I look at every one. I recognize deer better than I do people. I can name our shooter bucks even after their antlers drop.

• What does it really take to be a great whitetail hunter? You need to understand how big deer behave on your ground. You learn that by fanatically studying the animals—and any girl can do that as well as any guy.

• Some clients are surprised to have a female guide, but once they get to know me, it’s all good. One thing I do get a lot is “Are you the cook?” I can cook. But not during deer season.

• Hell, yeah, I’m tough. You have to be in this job. Hanging stands, dragging animals, hauling client’s stuff 20 feet into trees. I once had to help an NFL fullback get into his stand after he froze at the top of the ladder.

• Women hunters tear each other down worse than the guys—over the color pink, over wearing makeup, and on and on. For any girls out there confused about who they should be or how they should look while hunting, here’s what you do: You just be yourself. Don’t let hunting or other hunters change you.

• I think it’s important for people to see badass female hunters. Maybe it helps change perceptions a little. —As told to Dave Hurteau

These seven women are transforming the face of hunting and fishing.

We surveyed over 900 women to find out what they think about the state of their sports.