He drew me wearing panty hose, in a yellow medieval fool’s costume, with icicles hanging from my nostrils. With a... 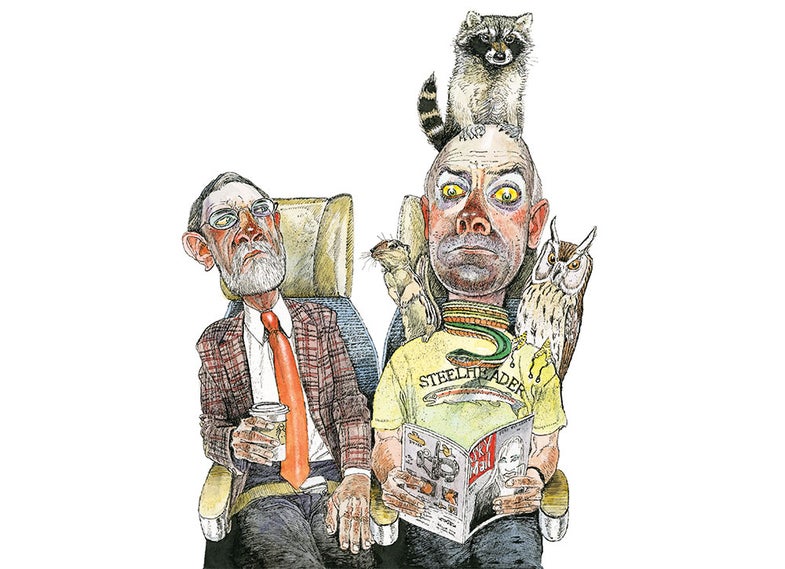 Unruh (at left) and Heavey in a 2014 illustration.. Jack Unruh
SHARE

He drew me wearing panty hose, in a yellow medieval fool’s costume, with icicles hanging from my nostrils. With a pig’s nose, straitjacketed on a psychiatrist’s couch, sporting antlers and red high heels. He always gave me a big red nose and vacant, yellow, bloodshot eyes that couldn’t quite focus on the same point and therefore looked crazed. And I would have done anything for the guy.

It’s fitting that the last time I saw illustrator Jack Unruh, I was modeling a hot pink bra as he took pictures to sketch from. I’d come to Dallas as soon as I could after hearing that he had cancer. He was finally home from the hospital. That meant Jack could draw, which was better for him than any drug. I’d written a column about dumb survival hacks, one of which touted what great “debris masks” you could make from the cups of a padded bra. Jack’s idea was to draw me in a bra for the illustration. This wasn’t what I’d had in mind, but I’d learned the hard way that protest just meant I’d look worse in the final image. I drove to the nearest Walmart. I bought the bra.

Jack posed me bending forward as if I were trying to undo the clasp while a mushroom cloud rose in the distance. “Look to your left like you’ve just seen the cloud,” he said. “Look terrified.” Click. “O.K., astonished.” Click. “Close your mouth,” he said, choking back the laugh rising in his throat because it hurt. “You look like an idiot with your mouth open.”

“I’m half naked in women’s underwear in your kitchen,” I pointed out, “but I don’t look like an idiot when my mouth’s closed?” He shrugged. Dignity was irrele­vant. We were professionals.

I met Jack around 2003, when I was given this column on a trial basis (I think it’s still on a trial basis) and he was hired to illustrate. One of the first recounted how I’d gone to Brazil to fish for peacock bass but ended up so propulsively sick that I never left my hotel and was lucky to fly home alive four days later. The guy in his drawing was me all right. But me as a man who, after a life of unspeakable depravity, was now dying—­deservedly—of some Ebola-like illness. He drew me sitting bolt upright in bed, rivulets of sweat running down my face. Purple and gray skin was stretched tight over my skull and I already had the red nose that would be there for 13 years. Three fish swam over my bed blowing little bubbles. The image was disturbing, twisted, and striking. It was brilliant.

My mother was not amused. “You’re a good-looking boy,” she protested—I was in my late 40s at the time—“Why is that man so mean to you?” I explained that it was because he liked me, that you couldn’t make somebody look that awful unless you had some affection for him. Mom didn’t buy it. I had already decided that anybody with an imagination this bent and strange was somebody I would get along with.

For the next dozen years we took hunting and fishing trips all over the country, often bamboozling this magazine into funding them. Jack outfished and outshot me, but he was such a gentleman about it that it never stung. He had 20 years on me, but I never thought of him as old. He was vigorous and from long-lived people. Subconsciously, I was banking on his being around a long time. 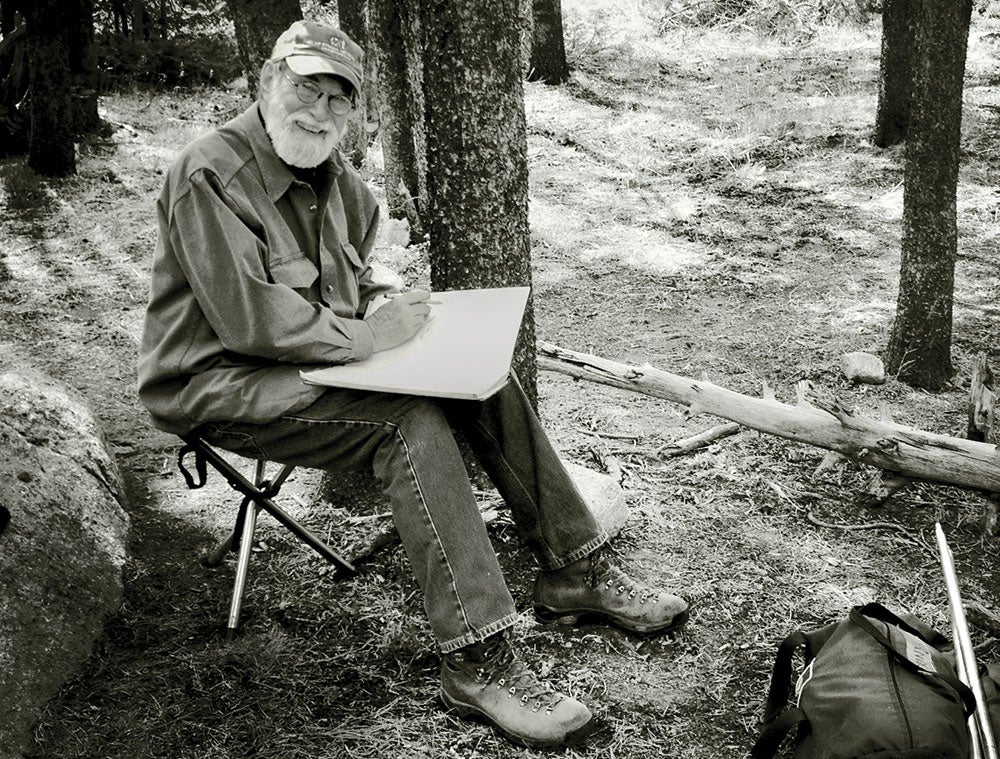 Unruh with his sketch­book on a fishing trip with Heavey to the Wind Rivers in 2012.

Outwardly, we were an unlikely pair. I go through life expecting to be fired, audited, or arrested for crimes I don’t remember committing but probably did anyway. Jack was an optimist. He never lost a sense of gratitude and wonder that he made a living “doodling”—despite being sought out by magazines from National Geographic to Rolling Stone, Time to Sports Illustrated. He was never happier or more himself than when drawing.

You never really understand why you love someone. Different as we were, each of us recognized something in the other—some spark, some sense of the divine absurdity of life. We never spoke of this. The closest we ever came was once when having a cocktail on our motel beds after pheasant hunting in South Dakota. Jack always brought better whiskey, so I saw to it that we drank his first, and I generally poured my drink taller than his. Being a gentleman, he waited years to say anything. “It’s because you’re an optimist and I’m a cynic,” I said airily. “When a cynic’s glass gets below half full, it’s kind of critical. He’s worried that there might not be any more coming. Whereas you’re pretty sure there will be.”

“Nope. Known it all along. Just saying it out loud now.” We raised our plastic cups and sipped.

Jack never finished the illustration of me in the bra. He e-mailed the magazine, apologizing and explaining that he could no longer make the climb to his studio. He thanked everyone for all the fun over the years. He died four days later.

Jack Unruh was more than a great artist. He was a great soul. I counted him among my best friends. And I’m bold enough to believe—this may be wishful thinking, but I think it’s true—that he counted me among his. Bless you, Jack. Thank you. I love you.