Camping With An Electric Bear Fence

Today's compact, electric bear fences are more suitable for camping in the backcountry 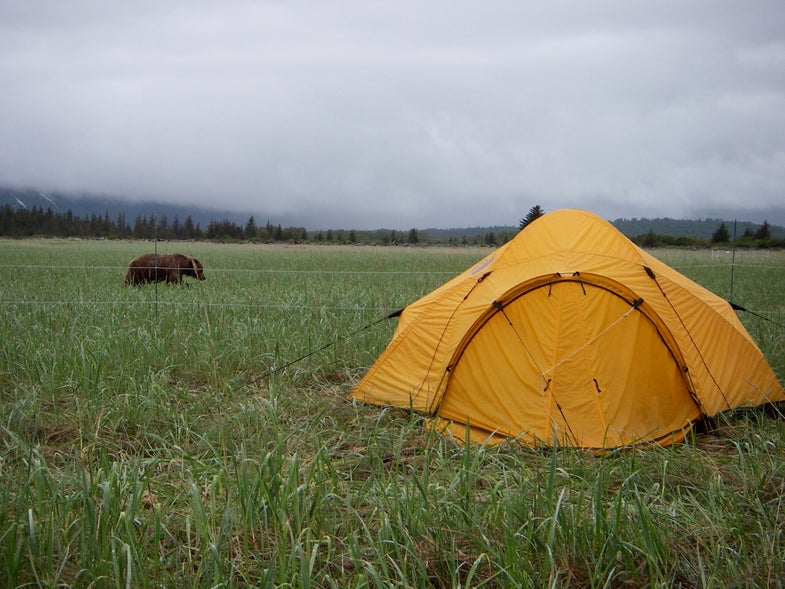 WHEN YOU’RE CAMPING on a sandbar pock-marked with Alaskan grizzly tracks, the last words you want to hear are “We’ve got company.” Especially when the bear that prompted them is within 20 yards of the raft you’ve pulled to the shore. One sniff of the fish slime on the net in the raft, one swipe of that catcher’s-mitt paw, and my brother and I would be staring at a 50-mile hike downriver to the nearest Indian outpost.

It was then that I realized that the electric fence we had strung around our tents would have been better served protecting our gear. As it was too late for second guesses, I jacked a shell into my shotgun and fired a warning shot when the bear had approached to 40 feet. He shook his head and shuffled into the willows.

A Backcountry Fence Although Alaskans have used electric fences to protect smokehouses and meat poles since the 1930s, compact models have become widely available only during the last several years. John Gookin, research director for the National Outdoor Leadership School—who worked with Mark Matheny of UDAP Industries to design the one my brother and I used on our float trip last summer—tested a prototype on the grizzlies in Katmai National Park. It was trial by fire; Gookin set up his tent a mere 100 yards from where “Grizzly Man” Timothy Treadwell spent several seasons before famously meeting his fate in the jaws of a bear in 2003. After the first night, Gookin awoke to find one of the corner poles of the fence bent, with a clump of brown hair on the top.

Knowing the fence had worked was reassuring. “I have to admit I slept better after that,” he says. Later tests at the Grizzly & Wolf Discovery Center in West Yellowstone, Mont., determined that some of the bears could actually feel the electrical charge in the air. Most shied away before contacting it; those that got shocked left the area.

Bear Necessity? The Bear Shock, produced by UDAP, weighs 3 1/2 pounds and encloses a 27×27-foot area. (UDAP also markets a beefier fence designed for food caches.) Gookin says that during their trials, they’ve never had a bear get inside when human error wasn’t to blame.

Like most electric fences, the Bear Shock relies on a capacitor to up the voltage, delivering a charge of 6,000 volts on just two D-cell batteries. Setup takes about as long as erecting a couple of tents. You place the poles, wrap the wires (two live and one ground), clip them off to a corner post, and set the switch on the energizer. During our trip, we found the daily routine of unwinding and rewinding the wires a bit tedious (a crank would have helped), but when every gravel bar you camp on is heaped with bear scat, you don’t tend to complain.

Bear fences won’t work everywhere, or in all weather. In weedy sites, you have to cut down growth that contacts the wires or the charge will be diminished. Heavy rain or snow could also cause failure. Under no conditions should you consider fencing a substitute for properly storing food and keeping a clean camp.

Conditions aside, I’m sold on electric fences in grizzly country, if only for the peace of mind. After the close encounter on our Alaskan float, my brother and I looked at each other, shrugged, and crawled back in our sleeping bags. But for the rest of the trip, we kept the raft inside the charged wires.