To most archers, elk hunting means rutting bulls bugling to estrous cows. But in many states, the archery opener precedes... 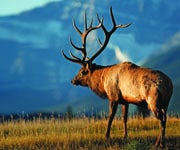 To most archers, elk hunting means rutting bulls bugling to estrous cows. But in many states, the archery opener precedes peak breeding by weeks. “You can wait for bulls to start bugling in earnest, but you’ll miss out on a lot of hunting at a time when bulls are comparatively unpressured,” says Chad Schearer, Montana elk expert and host of the popular Shoot Straight TV show. Schearer, a world-­champion elk caller, offers these five tips for arrowing a pre-rut trophy.

Find the Herd
“Getting into animals in the early season is the toughest part,” says Schearer. “I like to hike to a high observation point–a spot that lets me glass from 3 to 5 miles–and then I comb the entire area with a spotting scope. If there are animals nearby, I’ll see them. If I don’t find elk, I move until I do.”

Beat Them to Bed
Early-season elk are all about feeding, and one of their favorite sources is lowland alfalfa. “I’ve seen them travel 5 to 10 miles to hit a field and still get back to the mountain by daybreak,” Schearer notes. “I glass until I find a good bedding area and learn how elk approach. Then I try to get on the same slope ahead of them the next morning.”

Wait Over Water
Warm temperatures make water holes highly attractive to elk in early fall. Look for fresh tracks to reveal which water sources are getting hit hardest. “If a pond isn’t too remote, I’ll pack in a lightweight treestand and set up within bow range of the water’s edge,” Schearer says. “This is one of my favorite afternoon setups for a big bull.”

Watch a Wallow
Most hunters associate wallows with the rut, but even well before the breeding season begins, bulls love mucking themselves up in these messy mud pits, according to Schearer. “They coat themselves with mud to appear bigger while working out dominance among males prior to the rut. I look for wallows on north-facing slopes in or near dark timber. If it’s legal to do so, I’ll put up a trail camera set on video mode to find the hottest wallow and judge the quality of the bulls. Then I either set up a treestand or build a blind nearby.”

Call Them to a Decoy
As long as you avoid aggressive rut talk, calling can lure in an early-season bull, especially if you combine it with a fake. “I like soft chirps and mews, made with a diaphragm call,” says Schearer. “I’ll set up along a trail near an opening where I’ve got good shooting. Then I stake out a Montana Cow Elk Decoy about 20 yards away. If a bull responds to my calls, he’ll expect to see a cow. The decoy fills that need and gives him something to look at while I draw my bow.”