Late Season Bucks: Slip In On The South Slope

Illustration by Andre Malok Late-season deer need to feed every six hours, and they seek foods that are high in... 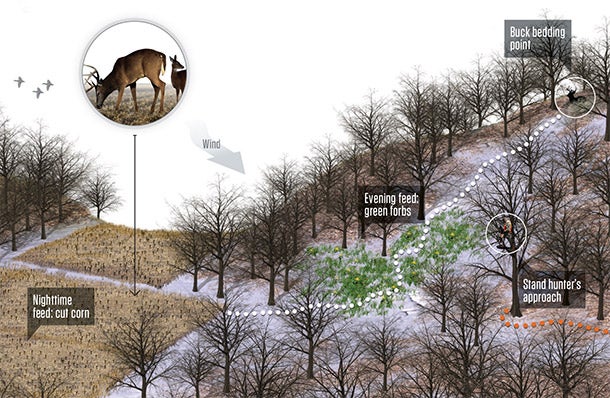 Late-season deer need to feed every six hours, and they seek foods that are high in carbs and protein,” says Dougherty, who hunts primarily in western New York. A field of corn or beans is perfect. But pressured deer know better than to expose themselves in daylight. So the trick is to find quality forage where deer feel secure.

One of the most overlooked late-season food sources is forbs, which make up 60 percent or more of what deer eat throughout the year, he says. “The key to finding them now is sun-drenched southern slopes, where weeds and wildflowers–maybe 100 edible species–are still green and growing, providing deer with the nutrition they need now.”

Any south-facing slope can be good, but those facing straight south or southwest are usually best. “These can be 6 to 8 percent warmer than any others,” says Dougherty. Also, target hillsides where the canopy is somewhat open, he advises, where the sun reaches ground plants and keeps them alive and growing.

These south slopes set up perfectly for a late-season afternoon hunt. “Most of us have a prevailing wind from the west,” says Dougherty. “So slip in from the east and below the point of the ridge, where bucks love to bed, just out of the wind.” Quietly hang a stand overlooking the greenest forbs, or find some good nearby cover that lets you hunt from the ground.

Go early and be quiet
“You really need to watch your noise setting up,” Dougherty warns. “Look for a day with a good breeze to cover your approach, and give yourself plenty of time to slip into position. If you get into this overlooked spot unnoticed, your buck could show up to feed well before dark.”