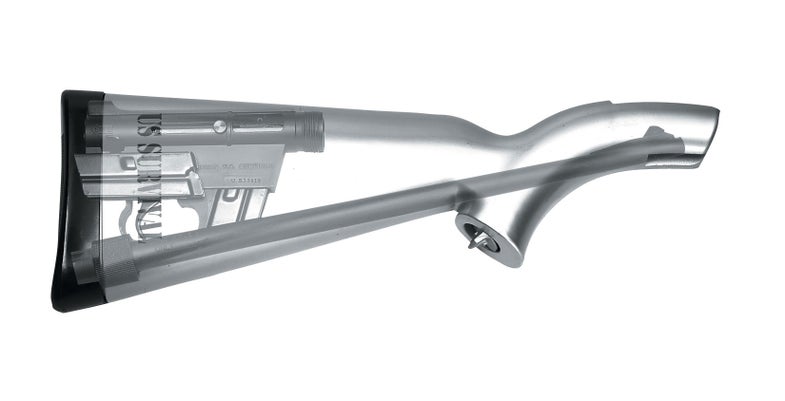 If you’ve watched Survivorman, it’s hard to ignore the fact that Les Stroud, the star of the show, seems to starve during every episode. I don’t mean this as a criticism; Stroud is the real deal. But his hunger pangs raise a point: Boy Scout improv works better on the page than in the forest. If you want to bring down enough bacon to keep up your strength, you’re going to need bullets–and the more, the better. With this in mind, I recently tested two different approaches to the survival gun question.

The Henry U.S. Survival firearm ($245; ­henry​repeating.com) is an updated version of the ArmaLite AR-7 designed for the Air Force. Weighing a scant 21⁄2 pounds, it is the ultimate breakdown .22, with the action and barrel unscrewing to fit inside the ABS synthetic buttstock, which floats in case your canoe capsizes. (Testing revealed the rifle also bobs like an apple when fully assembled.)

A lightweight .22 is a proficient survival gun for harvesting small game, and at first glance the Henry seemed to perfectly marry the longer sighting plane of a rifle with pistol portability. But tests revealed a problem. The Henry is a blowback semiauto with a rough chamber and a reputation for unreliable feeding, and jamming was the rule until I switched from flat-nosed, regular-velocity ammo to CCi Stingers, which are high-velocity jacketed round-nose bullets. It seems to require kickback from a speedy bullet to work the strong spring of the bolt. The receiver rib is grooved for scope mounts, but this is a survival gun chosen for portability, and the adjustable aperture rear and ramp front sight proved adequate for the ranges at which most hunters will use it. I shot a 1⁄12-inch group at 20 yards–plenty good to render rabbit into hasenpfeffer.

The verdict? If I knew in advance I’d be forced to feed myself with a .22, I’d choose a more substantial takedown model, such as the Browning SA-22 or Marlin’s 70PSS Papoose. But where space and weight come at a premium, the Henry is a good choice. And it will keep you in squirrel stew as long as you feed it ammo it has an appetite for.

A Sleeve Up My Sleeve

The second gun I tested was a longtime friend–my .350 Remington Magnum. The best survival weapon is the one you have in your hand when you face a survival situation. For most hunters, that’s a centerfire rifle.

What turns an elk thumper into a small-game provider is the cartridge. Instead of using full-power loads, I fired handgun rounds using a cartridge conversion sleeve (KJ Knives: $25; 406-​669‑3382). A conversion sleeve is a housing that encloses a handgun cartridge so it fits the diameter of a rifle bore. (For the .350, it’s the .38 auto.) You can drop 30 or more pistol rounds into a pocket and forget they are there. Reserve your big-game loads to signal for help or rebuff teeth-gnashing creatures of the night.

As expected, the pistol bullets seldom shot to the crosshairs, at least not at rabbit range. But accuracy was adequate and estimating holdover was simple–simple enough, anyway, to reward me with a snowshoe hare while I was elk hunting last fall. True, you have to eject the conversion sleeve after each shot, remove the shell, and reload. But firepower isn’t an issue regardless of the survival gun you choose–just as long as your first aim is true.