Distracted by a hot trout bite, the author and his son got lost in unfamiliar wilderness, with a bad storm rolling in. 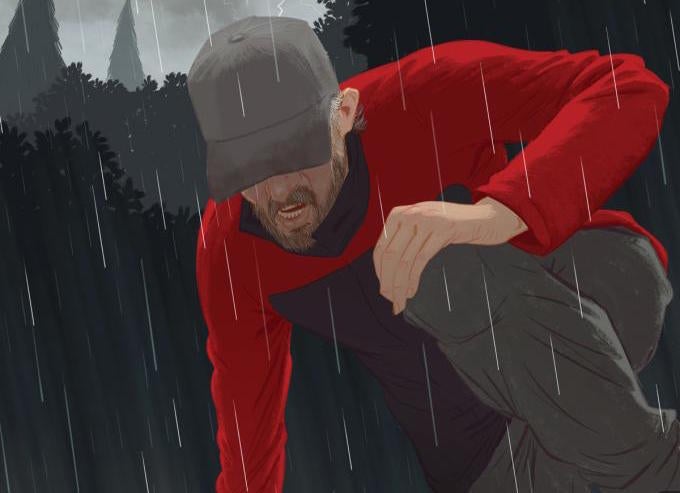 We heard waterfalls, one after another, but the mind tends to latch onto something it yearns to believe. A waterfall, Jack and I had been told, marked a faint fisherman’s trail out of the gorge, and we’d been searching for it now for the last few hours. We were no longer thinking of trout; our fly rods were broken down and tucked under our arms. We were trying to get out of the woods before dark, but each waterfall we heard turned out to be the wind coursing through the trees or the creek rushing by boulders. It was one false summit after another. And now worry began to gnaw at my gut, because I’d broken every rule when we left the truck.

We had no map, compass, or flashlight. No shelter, signaling device, or fire starter. No firsthand knowledge of where we were. No clue how to beat the dropping sun back to the trail. I had ignored 40 years of knowing better.

Then came the downpours and the lightning. Followed by fear.

When It Rains, It Pours

Jack and I had been emboldened by a pal’s glowing report of fish in a deep gorge—a tough hike in and out, my buddy recalled, but nothing too crazy. Hit the creek and fish to a giant waterfall. The trail out was overgrown, he seemed to remember, but it’s there. Door to door, maybe a six-hour trip. A half day of hammering wild-­​breeding Southern Appalachian rainbows and browns. It wasn’t until later that I learned my friend’s memories were a good 10 years old.

After seven hours in the gorge, Jack and I started to wonder: Where was this giant waterfall? Another hour later, the second-guessing began. Could we have passed it? Could it have been one of the many smaller cascades we’d blown by, sucked upstream by deep plunge pools and long riffles full of hungry wild fish? We’d been catching trout right and left—loath to skip any hole, pass by any run—so we lost track of time. That made it tough to decipher how far we’d gone, so we had no idea how much farther we had to go.

A map would’ve helped, or a sandwich to give us a jolt of energy. I couldn’t believe my mistakes. After we’d been rock scrambling for an hour, clawing up and over house-size boulders with increasing urgency, my surgery-scarred right knee was swollen and throbbing. That’s when I suggested climbing through the rhododendron thickets to search for a trail above. Jack held his tongue, but I could tell he disagreed with my plan.

It was during the frantic clawing through the rhodos that I lost my head a little bit. Hemmed in by dense webs of rhododendron, thrashing through the branches, we were making less headway than when we had hauled each other up the boulders. I knew we should never have left the creek. There’s a reason these rhodo tangles are known as hells. My second-guessing was seasoned with self-loathing; I knew better. I knew not to leave the truck without the essentials. I knew not to veer into a greater unknown. Now Jack and I were separated in the brambles, and that’s when the storm rolled in and lightning flashed. What was going to be a very nasty night in the woods turned dangerous.

He was right. This is how you dig yourself into a deeper hole—let panic drive you on a helter-skelter path to big hurt. I pulled up to my knees in the thicket, and swallowed my pride.

“Let’s head back, buddy,” I called to Jack. “Let’s put our heads together.” We slid down to the creek bank, drenched, and took inventory. We had a LifeStraw and one granola bar. Once the evening cooled and the lightning tailed off, our worst-case scenario was a miserable 10 hours in the dark. No one was going to die. No chance of frostbitten fingers. Just a long, ugly night in the rain.

Our minds settled, and we came up with a new plan: We would claw up the canyon for 45 more minutes, and not a second longer. If we hadn’t found the mythic waterfall by then, we’d have just enough time to search for a bivvy—shelter under a log fall, a slab of rock, or a cave—and hunker down till dawn.

Jack took the lead up the gorge, and as I watched him boulder-hop through the falling light, it was clear that he was no longer the little boy I had to shelter and protect. We were equal partners in this mess. A half hour later we found the waterfall; there was no mistaking it. The creek fell down a moss-slicked cliff face in a 100-foot double cascade. We high-fived and took turns lying on the boulders to drink deep through the LifeStraw, then split the granola bar for the steep climb out. Having dodged a bullet, it didn’t take long for Jack and me to laugh about our predicament.

“I’m not lying,” Jack said. “It would have been kind of cool to spend the night out there.”

After that, it would just have been wet, cold, dark, and miserable. As we headed up the trail, my humility paired with awe that a seemingly innocuous afternoon of flyfishing went south so quickly—that a relatively small blank spot on the map could impart the will of wilderness so harshly on my folly. I hobbled up the trail, leaning on Jack, humbled enough to vow never to take it for granted again.

TIP OF THE MONTH: To the 10th Degree

When navigating to a fixed point on a linear feature—a campsite on a lakeshore or the place where you dropped your pack when you went looking for the spring—use a planned deviation of 10 degrees to one side or the other. This “deliberate offset” allows you to know for certain whether to turn right or left when you hit the trail. —T.E.N.