Primitive structures fall into three categories: body-heated shelters; open structures; and enclosed ones heated by inside fire. Each has its advantages 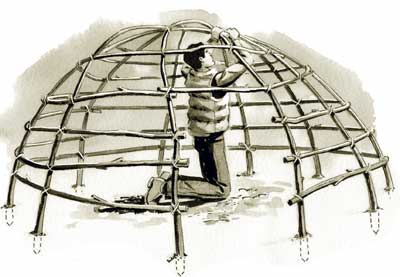 Introduction:
Last November, my son, Tom, and I weathered a snowstorm in Montana’s Crazy Mountains while hunting elk. At the height of the storm, when whiteout conditions made it difficult to see where we were going, I found a sheltered spot and gathered some downfall to build a wickiup, a primitive half-tepee. I sparked a fire by glancing the back of a knife blade against a piece of flint and lighting some bark tinder. With shelter and warmth, we rode out the storm, eating sandwiches and talking elk.

At the same time, a 49-year-old hunter was lost and in serious trouble in the Absaroka Range a few dozen miles to the south. Rescuers with search dogs unraveled a 6-mile scent trail the man had left before finding him collapsed on a logging road, hypothermic and barely breathing. Despite their attempts to warm him, he died six hours later. Apparently he had been unprepared for the storm, but it was not a terribly cold day, and had he been able to build a fire or construct almost any kind of primitive shelter before sweating through his clothing, this tragedy might have been avoided.

Primitive is the key here. Our ancestors depended on three basic skills to survive: They knew how to shelter themselves from harsh climates; they were able to spark fire to heat those structures; and they could trap and gather food. Sadly, many of their skills have been forgotten.

Most sportsmen rarely find themselves in life-or-death situations. But it can happen, and not just when you’re hunting or fishing. What if your car broke down in the middle of nowhere, or your plane had to make an emergency landing in the wilderness? What if all you had was a knife and your wits? Could you survive the way your ancestors did? Read this, and you just might make it. [NEXT “Body-Heat Shelters”]

Part I: Body-Heat Shelters
In its simplest form, a shelter is nothing more than a shell that traps a pocket of dead air warmed solely by body heat. In tree belts, such shelters are constructed of decomposing leaf litter and other organic debris; in barren, polar regions, they are made of snow.

skill 1 Debris Hut (picture)
Heap up a big mound of duff and detritus from the forest floor, then excavate a pocket that is large enough to crawl into. After getting inside, partially block the doorway to minimize air circulation. If it isn’t cramped and dirty, you’ve made the air space too big for your body to heat it sufficiently.

skill 2 Quintze (picture)
Properly constructed, this poor man’s igloo can be body-heated to above freezing on a 20-below day, higher if you light a candle.

Open Shelters
Bough structures that reflect a fire’s warmth are the most important shelters to know how to build. They can be erected without tools in an hour provided you are in an area with downed timber-less if you find a makeshift ridgepole such as a leaning or partly fallen tree to support the boughs.

skill 3 Pole and Bough Lean-to (picture)
One of the most ancient shelters, the single wall of a lean-to serves triple duty as windbreak, fire reflector, and overhead shelter.

skill 4 A-Frame (picture)
The pitched roof of the A-frame bough shelter offers more protection against the wind than a lean-to and can still be heated by fire at the entrance. One drawback is that the occupant can’t lie down parallel to the fire for even warmth.

Enclosed Shelters
These take more time to build than open shelters (at least three hours), but your efforts will be doubly rewarded. Not only can the shelter be warmed by a small fire, reducing the need to collect a huge pile of wood, but the firelight reflects off the walls, providing cheery illumination for sitting out a long winter night.

skill 5 Wickiup (picture)
This forerunner of the tepee remains the quintessential primitive shelter-sturdy enough to blunt prevailing winds, weatherproof, quickly built for nomadic hunters, but comfortable enough to serve as a long-term home. It can be partially enclosed (my son and I made a half-open wickiup to sit out the snowstorm, with a fire built in front of the shelter), or fully enclosed and vented to permit an inside fire.

skill 6 Wigwam (picture)
A complex version of the wickiup, this is built with long, limber poles bent into a dome-shaped framework to maximize interior space.

skill 7 Salish Subterranean Shelter (picture)
Used by Pacific tribes from Alaska to present-day California, pit shelters are impractical unless you have a digging implement, but they offer better protection from extreme heat and cold than aboveground shelters.

skill 7 Salish Subterranean Shelter (picture)
Used by Pacific tribes from Alaska to present-day California, pit shelters are impractical unless you have a digging implement, but they offer better protection from extreme heat and cold than aboveground shelters.