There are some great cartoons and tee shirts out there that capture the mindset of the true fisherman, which—as any... 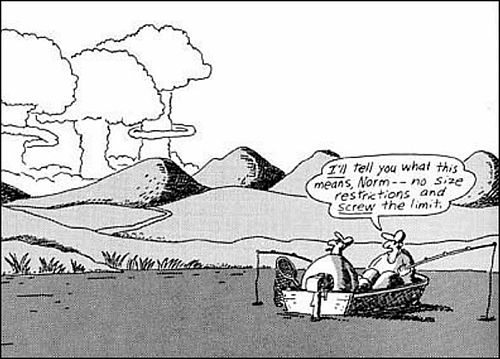 A fishing cartoon from The Far Side.. TheFarSide.com
SHARE

There are some great cartoons and tee shirts out there that capture the mindset of the true fisherman, which—as any number of psychological studies have confirmed—is a kind of single-minded insanity. Copyright law being what it is, however, I cannot show all the images I would like to. That would immediately earn me a one-way ticket to Stripe City. So I’ll just describe a couple of them.

A friend once brought me one on a tee shirt from Nantucket or Martha’s Vineyard or someplace else I’ll probably never visit. It featured the eerily grinning skeleton of a surf fisherman in his lawnchair, fishing hat still perched at a rakish angle on his skull. The caption read, “One more cast.” That was pretty apt. The great promise of fishing, after all, is that you can whiff all day long—all week long if you’ve traveled somewhere—and still win it all on your last cast.

“One last cast” is fisherman’s code for, “A couple more hours or so.” I wore that shirt until it was just about transparent, then carried it in my tackle box as a slime rag.

But nobody quite captured the unique duality of angler’s obsession—that mixture of egocentric, stupid self-absorption and the Zen-like knowledge that the only real moment is the one that exists right now—like “The Far Side” cartoonist Gary Larson, who retired at the ripe old age of 45. He did a number of great fishing cartoons, but my favorite shows two guys in a rowboat on a lake watching as multiple mushroom clouds bloom in the distance. One fisherman gawks, cigarette dangling loosely from his lips, head cocked slightly back. He has obviously just blurted out the obvious question. His companion, far less interested in the imminent destruction of the planet than what it means for their outing, cuts right through all the nonessential parts. The caption reads: “I’ll tell you what this means, Norm — no size restrictions and screw the limit.”

Now that’s a true fisherman for you. Anybody else have favorite fishing ‘toons?