The Best Predator Guns and Gear from SHOT Show 2019

New guns, tools, optics, and calls to help you drop even the smartest coyotes, bobcats, foxes and other furbearers dead in their tracks 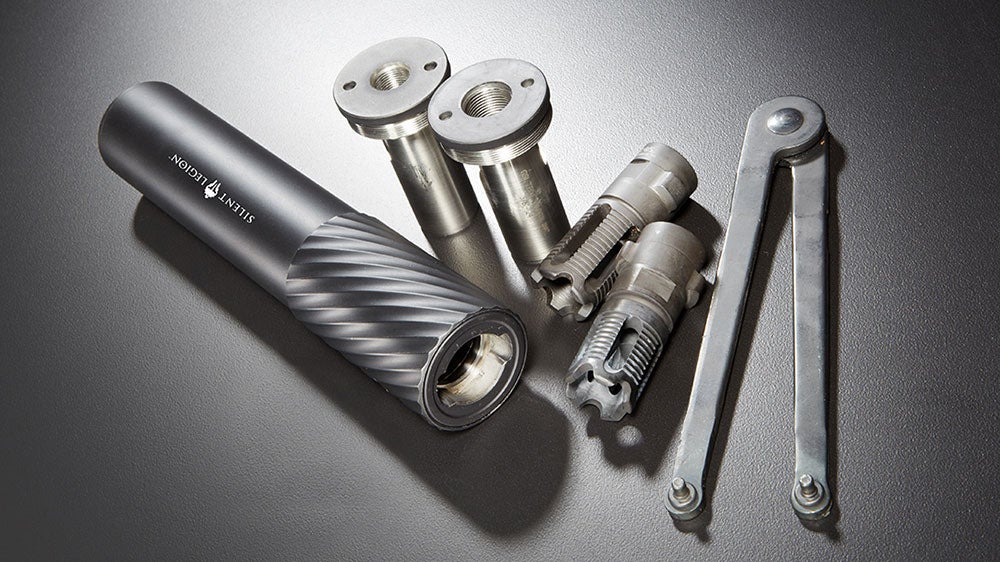 I love to hunt coyotes, and so I’m always looking for ways to gain an edge in the field—be it a new tactic or new cutting-edge gear. And at the 2019 SHOT show, I got a first look at some of the best new guns, calls, optics, and other gear designed for hunting predators. It’s impossible to see everything at SHOT—there’s simply too much—but the following items were the ones that caught my eye and should help any hunter gain that edge in 2019.

In a few states, it’s legal to hunt predators at night with the aid of a spotlight. Some might think a light makes it easier to find animals, but it’s still a tough proposition. That’s why I am interested in using the LTO Tracker 2 HD from Leupold. It’s a handheld telescope that identifies heat signatures just like a thermal imaging camera or binocular, without lighting up the landscape. It’s lightweight (7 ounces), has 6 different color palettes, and runs for 3 hours on a single CR123 battery. But the best feature is the 7x zoom that can detect temperature variations out to 750 yards.

Alps seems to have taken a cue from the turkey-hunting crowd and applied it to predator hunting by integrating a removable memory-foam seat and kickstand frame to a pack—a combination that should allow hunters to sit anywhere, even in wide-open country. The new Enforcer Predator Hunting Vest has adjustable legs, the wide footpads prevent sinking into the ground, there’s enough storage (800 cubic inches) to carry a large electronic caller plus other gear, and there are shotgun and rifle shell holders.

Of all the new knives at the 2019 SHOT show, the one that impressed me the most was the Monashee from Columbia River Knife and Tool (CRKT). Designed by Russ Kommer of Fargo, North Dakota, this knife has a locking 3 ½-inch stainless steel blade, recessed finger grips that feel like they’re customized for your hand, and a thermoplastic rubber grip that doesn’t didn’t slip (I poured water on my hand to see if it would). CRKT has been producing some great general-purpose hunting and camping knives for years, but this might be one of their best sellers for a long time.

The new Oryx rifle from Howa is a sleek, balanced, bolt-action modern sporting rifle that combines the best features of a classic hunting rifle with the popular look and feel of an AR. The chassis has an adjustable length of pull (13.25 to 15 inches) and comb height, recoil pad, and sling swivels. You can customize the chassis with green, black, gray, or FDE accents, and choose from a .300, .223, 7.62×39, or 6.5 Grendel calibers in Howa’s 1500 barreled action. The entire package is a steal, but if you like the Oryx chassis and want to customize the rest of the gun, you’re in luck: Howa sells the chassis alone for Remington, Tikka, Savage, and Ruger rifles for $400. And like all the company’s products, Howa backs everything with a lifetime warranty.

It’s always nice when a company can successfully combine two hunting products into one—and that’s what you have with Vortex’s new Fury HD 5000 Range Finding Binos. These 10×42 glasses provide a clear and sharp image of whatever you’re eyeballing at extended distances. After centering the small crosshairs on an object, just push the “measure” button and the right barrel displays the distance in bright orange digits. The laser can measure targets up to 5,000 yards away, there are settings for angle-compensated ranges, and a scan mode can give readings as you pan or track a moving animal. Like all Vortex products, the Fury HD lenses come with a lifetime, no-fault, transferable warranty.

The new Wildcat is unlike any rimfire you’ve ever shot.

Nothing starts a debate among passionate hunters more than where the common .22 rifle ranks on a list of appropriate predator guns. I’ve seen plenty of .22s dispatch coyotes with no issues, and I’ve seen just as many not even knock a dog over. Whether you love or hate them, you can’t argue with the fact most .22 rifles are affordable and reliable—not to mention easy to carry, handle, and shoot. They’re also great tools for young hunters entering the sport. With all that in mind, you should consider Winchester’s new Wildcat. Not only does this rimfire autoloader do all the things a .22 is supposed to do, but the stock has a sleek, tactical look and feel that is sure to make any young gun-toting hunter feel cool. The gun also has an 18-inch barrel and adjustable rear sight and a scope rail. And because the lower assembly pops out, you can clean the bore from either end. It’s incredibly light and a hoot to shoot.

Much like how a .22 rifle can help young hunters build confidence in the field, a rifle suppressor, particularly one fitted to an especially loud gun, takes away the shocking “boom” some new shooters might fear, and there are some who advocate it improves accuracy. But the real advantage, especially when it comes to hunting, is the ability to not spook animals when, for example, more than one predator is moving toward your setup. If you’ve ever considered a suppressor (which are legal in 42 states), Silent Legion manufactures a multi-caliber kit that makes it easy to attach suppressor to a 5.56mm, 6.8 SPC, .300, 7.6NATO, .300 Win Mag, and just about any other caliber you can think of. The suppressor is made from titanium, it has a Cerakote finish, and it weighs just one pound. The sound reduction is 32 decibels. 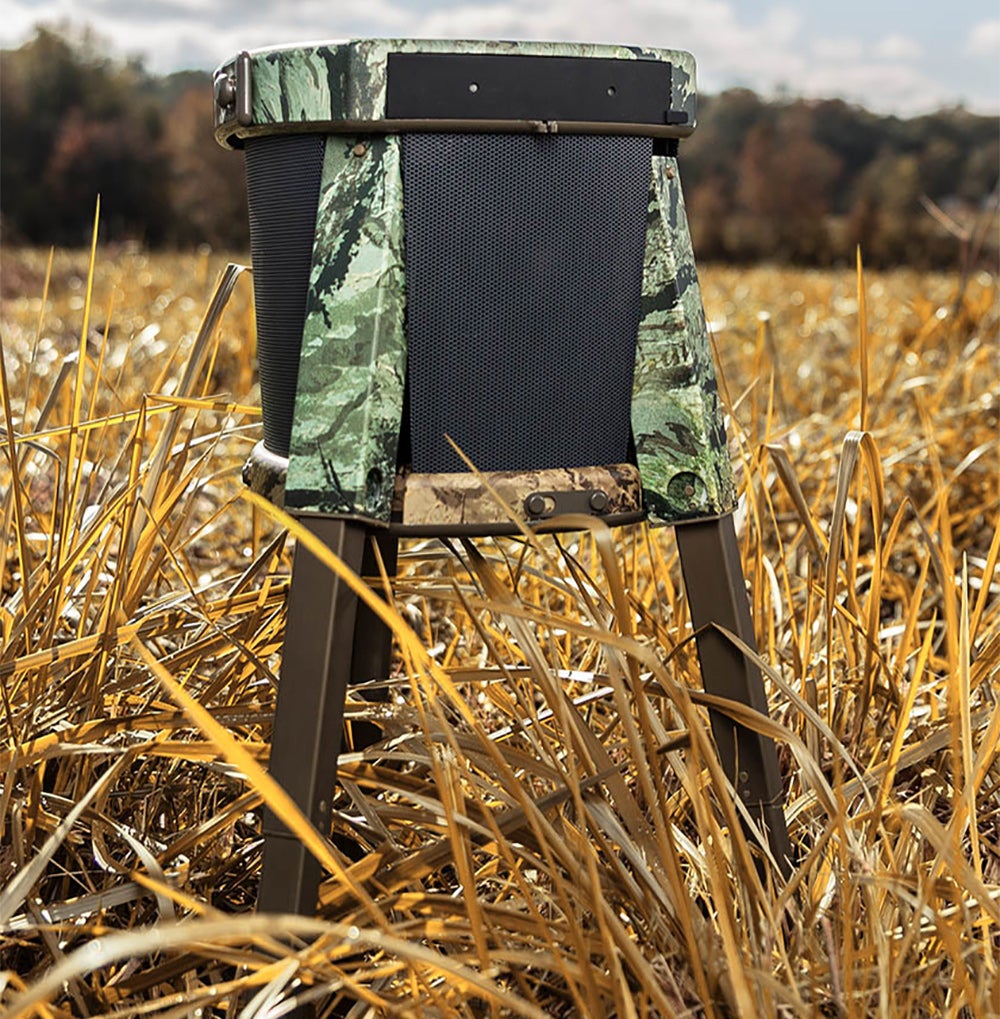 For 2019, Primos rethought the way electronic callers transmit sound and created units that broadcast audio a full 360 degrees. The idea is that no matter where a critter like a coyote might be from your position, it will hear the same sound as another dog listening in the opposite direction—something not easily achieved with nearly all single-direction calls available today. The remote can play the pre-loaded signals from up to 400 yards away, but you can also control it through a smartphone. When the hunt is over, you can use any of the Dogg setups to stream music while you’re skinning.

Savage has been producing one of the most revered rifles in America, the Model 110, since 1963, and this year the company is adding a predator model to the lineup. The 110 Predator includes Savage’s popular AccuFit system, which includes four spacers and five comb risers to customize the stock. The gun also includes the Savage AccuTrigger, so you can dial in the trigger pressure to your liking without relying on a gunsmith’s assistance. There’s a soft rubber-like material on the stock and pistol grip for better handling, and a detachable magazine. It will be available in .204 Ruger, .22-250 Remington, .223 Remington, .243 Winchester, .260 Remington, and 6.5 Creedmoor. 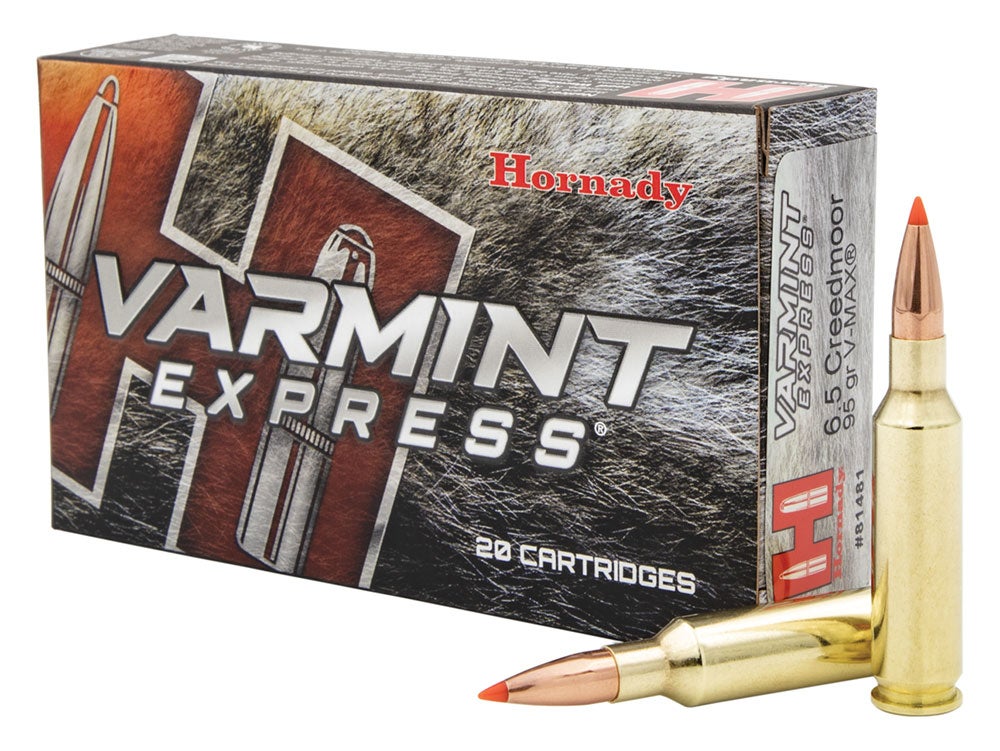 For years I’ve used Hornady ammunition on big game and predators alike, and it’s never failed. So I’m thrilled the company has decided to expand its Varmint Express lineup into .224 Valkyrie and 6.5 Creedmoor calibers. Built around Hornady’s polymer tippet V-MAX bullet and high-quality brass casings, the 60-grain .224 has a muzzle velocity of 3,300 fps. The 95-grain Creedmoor load has the same muzzle velocity as the Valkyrie, but it carries more energy on a flatter trajectory. Both are available in 20-round packages.

This year FOXPRO has created three new remote systems at three different price points. The best of the trio is the XWAVE. Similar to the company’s popular Shockwave call, the XWAVE has two swiveling speakers to direct sound, 2 auxiliary speaker jacks, custom preset buttons, more pre-loaded sounds than you can use, and room for another 1,000 more. It’s compatible with FOXPRO accessories, like the FoxJack 3 decoy, and it comes with a color remote. What makes this unit so cool is that it’s Bluetooth compatible, so if you have a custom call you’ve been itching to try, or the batteries die in the XWAVE remote, your smartphone can save the day. If you think the XWAVE is the call that will swing your predator-killing ratio into your favor, but are troubled by the price tag, don’t fret. FOXPRO makes two similar, less expansive models—the X24 and the X1, for $400 and $300, respectively.

Read Next: The 10 Best Coyote Cartridges

When I hunt, I’m either going in or coming out in the dark, and almost exclusively rely on a headlamp to illuminate my way—the lighter and brighter, the better. If that sounds familiar, consider the Ledlenser MH5. It’s affordable, has a seemingly indestructible housing, runs for 2.5 hours on a full charge, and projects a 400 lumen beam, which is incredibly bright given the lamp’s size and weight. But what sets this headlamp apart from others is the lens is adjustable, so you can broadcast a wide beam to light up a broad field of view, or rotate the bubble-shaped cover to condense and focus a spotlight in a specific direction.