Maintained Lead vs. Swing Through: The Best Way to Hit Your Target With a Shotgun

Both shooting styles work and can result in busted clays and dead birds, but as the video footage here shows, one is much steadier than the other 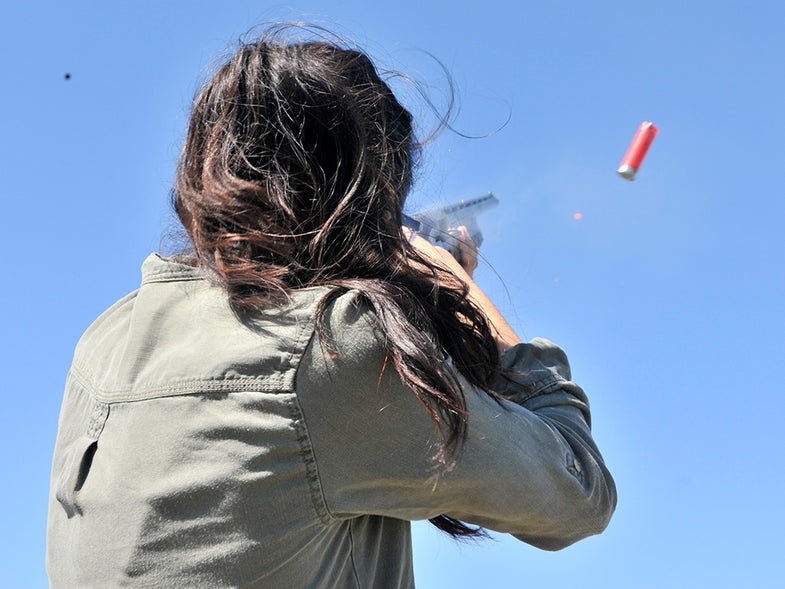 The easiest way to hit a bird or a target that requires any lead at all is to never let it pass your gun barrel. That runs counter to the way we all learn to shoot shotguns, which is by swinging through from behind the target and painting it out of the sky. That’s how I was taught, and swing through works very well for shallow angles and trapshooting.

With crossing birds and longer targets requiring more lead, some sort of maintained lead system works better. Maintained lead simply means starting your gun ahead of the target, moving it in time with the bird, and shooting when the gap between gun and target feels right. The ShotKam* videos here show both methods. The targets are Low House 1 and High House 2 on the skeet fields. Low 1 is an incomer that most people wait and shoot when it’s a close, 90-degree crosser.

High House 2: Here, the clay got ahead of the bird, forcing the shooter to swing through the target.

High 2 is a quartering away bird. While I usually try to keep my barrel in front of this bird as well, in this particular case it beat me out of the house and I had to swing through to catch it.

Although both targets break, the shot at Low 1 should looks easier, doesn’t it? The target comes to the barrel, the gun moves ahead, and as the muzzle matches the target’s speed, the bird seems to be almost stationary. Keeping the gun ahead of the target is a way to slow it down. It doesn’t actually fly slower, of course, but it seems to, and that’s why maintained lead is so effective.

Low House 1: Here, the shooter achieves a steady maintained lead, which almost makes the clay target appear to slow down.

High House 2, by comparison, is a scramble. The bird gets ahead of the gun, the gun rushes to catch up, and it shoots as it passes in front of the target. It’s all kind of frantic, and that’s the feeling you get (or the feeling I get, anyway) when swinging through birds. In addition, your timing must be just right to swing through a target and break it. There’s only a brief window where the gun is in the right place to hit the bird. Contrast that with the first bird, where you’ve got what seems like forever to pull the trigger as the gun moves in concert with the target.

Whenever I can, I don’t let the bird get in front of my barrel. When it does, I swing through and try to make the best of it.

*The ShotKam is by far the best gun mounted camera I’ve seen. It is so stupidly easy to use that even I can run one. All you do is turn it on and shoot. When the gun goes off, it saves a few seconds before the shot, and a few seconds after, automatically making short, 6- to 8-second videos. These were filmed with an older model. The new ones are HD and wireless, so you can play a shot back instantly on your phone to see what went right or wrong.