THE TEETH AT THE MOUTH

When we heard reports that people were hooking 50-pound redfish at the mouth of South Pass, we decided a fitting... 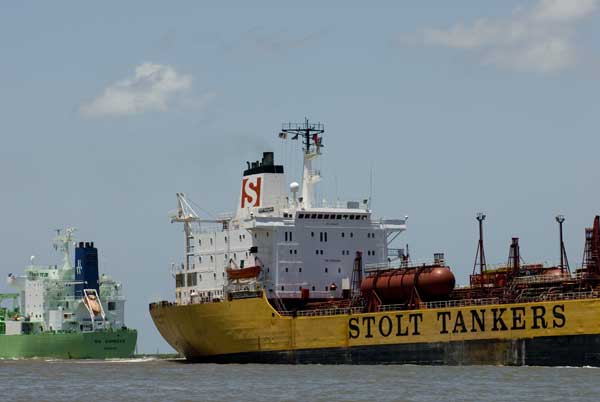 When we heard reports that people were hooking 50-pound redfish at the mouth of South Pass, we decided a fitting end to this trip would be to take our boat down the river and into the gulf to catch one. But this seemed a risky idea, so we floated it by a few folks to see what they thought. Half looked at us like we were crazy. The other half said it was possible we might drown, but that the fishing was so good we should give it a try anyway.

South Pass is one of the river’s three main mouths. To get there we drove to Venice, Louisiana, a port for the fishing and energy industries which is the furthest south you can take a truck down the Mississippi. The road to Venice is lined with shipyards, helipads, bait shops, and marinas full of huge bluewater yachts. One of those marinas is called Venice Marina, and it’s there we dropped in the boat.

From the Venice Marina it’s a 15-mile run downriver to the head of the pass, then another 15 miles to its mouth. Since our boat only held six gallons of gas, we knew we’d need some extra range to get there and back. So we borrowed a couple of spare tanks from the Woodland Inn’s caretaker, filled them up, and ducktaped them tight to keep them from leaking when we hit rough water.

Our biggest concern was wake. Besides small boats like ours there are four kinds of watercraft working out of Venice. Commercial fishing vessels, oceangoing tankers and container ships, tugs pushing barges full of cargo, and giant crewboats that take personnel and materials to and from the oil and gas rigs offshore. The fishing vessels don’t throw much wake, they just smell bad. The tankers and tugs push a great deal of water, but while their wakes are large, the waves come far enough apart that you don’t need to worry much. The crewboats, though, with their high, deep bows and powerful props, throw curling breakers that can swamp small craft.

One of the folks who told us to give this a try was a guide named David Ivers, who we met in the bar at the Woodland Inn. His solution to the crewboats was this: play chicken with them.

“Crewboats aren’t like tankers, they have to give you right of way,” he said. “The best thing to do is to point your bow straight at theirs. If you do that they have to slow down, which means they’re not pushing wake. Just zip around their stern and cut right behind them. Stay in the path they’ve smoothed out and you’ll have an easy ride.”

The first time we tried this my guts clenched up so hard I was sure I wouldn’t poop for a week. Crewboats can reach 100 feet in length. Our aluminum john boat was only 17.5 feet long, had 12 inches of freeboard, and was decked out in timber ghost camouflage. I wasn’t doubting the seamanship of Mississippi River pilots, just their ability to notice us. We weren’t exactly a high-vis object. If the ship I’d aimed our bow at hadn’t reduced speed, we’d have had to peel off and navigate its full wake, which did not look like fun. But Ivers’ trick worked like a charm. The crewboat slowed down, and as we ran behind it the pilot even gave us a wave and a grin, shaking his head as if to say “what the hell are you crazy bastards doing out here in that little thing?” 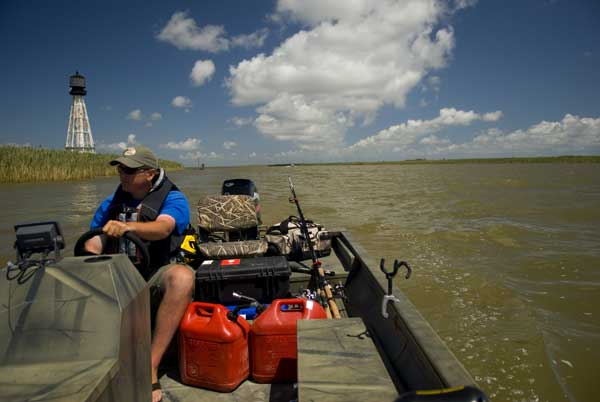 We motored for an hour downriver, banging and rattling our way past huge tankers, shrimping vessels, dredging operations, rafts of barges, and a few souped-up FLW Redfish Tour boats (you’d have to pay me a lot of money to paint a giant Tony the Tiger across my hull) until we finally reached the mouth. According to reports, the best place to fish was on the gulf side of a long rock jetty the Army Corps of Engineers had constructed to extend the river channel out into deeper water. But when we saw that jetty, our hearts sank.

A strong wind and an incoming tide were pushing directly against the Mississippi’s 2,320 mile-long current, and this created some massive waves. These were crashing against the jetty with great force, throwing gouts of spray into the air, where it was blown sideways by the wind. When I saw this I knew we wouldn’t be doing much fishing.

But there are times when I’m possessed by a mulish sort of stubborn, and I was damned if we’d come this far to turn around without at least touching the waters of the Gulf. About 100 yards past the edge of the jetty I could see a bouy tossing in the waves, and next to the bouy a scum line marking the border between green and brown water. So I pointed our nose into the maelstrom and motored on. 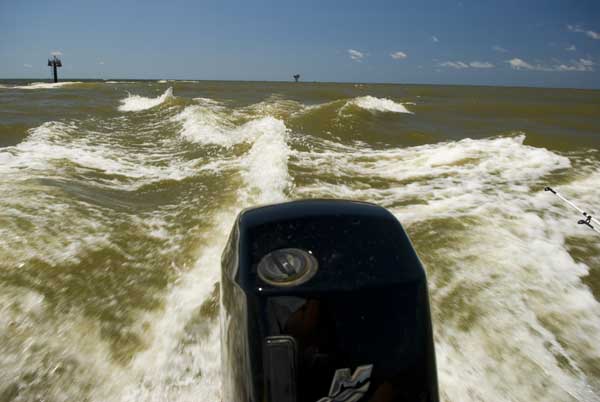 In the middle of the river, where we were, the waves weren’t breaking, but they were still huge (our photos don’t do them justice). We’d drop into the trough between two of them and look up to see their crests rising high above our heads, foaming brown and frowning at us. Tim turned green, but he was as committed as I to reaching the finish line, and gamely tried to keep shooting, even though we were bouncing around so much he couldn’t keep the camera’s viewfinder to his eye.

After minutes of this we finally reached the buoy, and sat for a moment beneath the hot blue sky with our bow in the gulf and our stern in the river. It was far enough. When the next big crest came I whipped the boat around and gunned the outboard, catching the face of the wave behind us and surfing it back to calmer water, and the long run home.